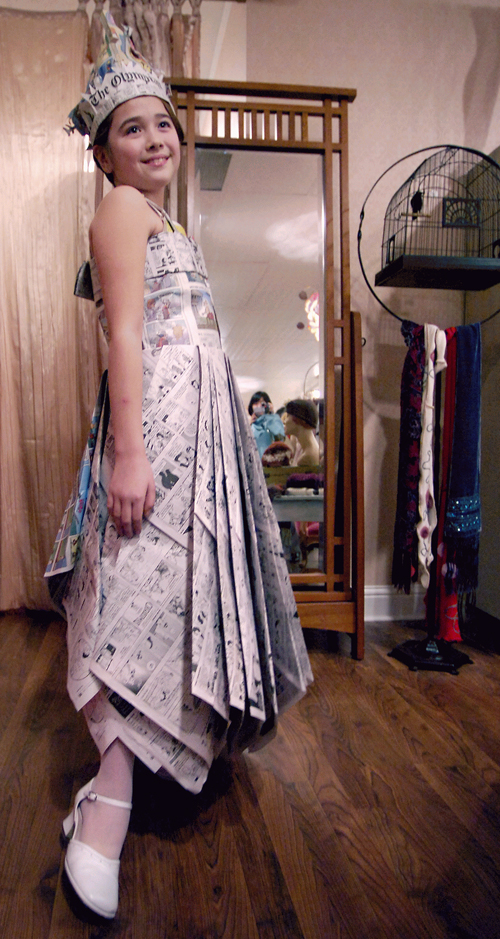 By day, Ed Livingston is a construction worker with M.A. Mortenson, the company that refurbished the Washington state Capitol building. By night, the 42-year-old lifelong Boston Harbor, Washington, resident is an original clothing designer and dressmaker.
Livingston has created several fun and whimsical dresses for his 10-year-old daughter, Hanae. But what's most unusual about the outfits and matching accessories is his choice of fabric: everything is made out of pages of The Olympian.
"The first one we ever made took 30 minutes," said Livingston, noting that it was an inexpensive Halloween costume for his daughter in 2004. "It wasn't as formal. I taped it into place."
The dress drew so much attention and buzz (and it was voted "best homemade costume" at Hanae's school Halloween carnival), the father-daughter duo decided to make more newspaper dresses.
Wearing the Sunday comics
Recently, they finished a dress that was made out of the Sunday and daily comics. "It's about 40 days worth of comics," said Livingston, as his daughter posed and waved at customers at Hot Toddy women's clothing and accessories shop. "I don't remember how many pages of paper it was. It was a lot."
Just like the designers on Bravo's hit television show, "Project Runway," - a reality series that the entire family is hooked on - Livingston doesn't rely on ready-made patterns. He said he enjoys trying to figure out how to fold paper into poodle skirts, A-lines and other designs.
"It's trial and error," Livingston said.
Most of the dresses take about six hours to fold, cut and tape together.
"I layer the pages to make them durable and then fold them into the bodice, straps and skirt," Livingston said. "The bodice is easily wearable by sewing in elastic."
Headline statement
Hanae often helps fold the pages. Sometimes, she selects the outer pages to make some sort of statement with the headlines.
In addition to the dresses, Hanae has a full line of newspaper accessories, including tiaras, earrings and a bracelet.
She said her favorite outfit was the first one that they made.
"It was so unique," Hanae said. "And it had wings."
Hanae and her friends have worn the dresses around downtown Olympia several different times. Livingston said it's not unusual for people to approach them and ask about the outfits and snap photographs.
They've even had motorists slow down along Fourth Avenue, roll down their windows and ask, "Where did you get those dresses?"
Hanae said the dresses are very comfortable, though she wishes her mom would let her wear something that was strapless. And she's as quick as Paris Hilton when it comes to posing for an audience.
Window display
"On one occasion, Hanae climbed into the display window at Dumpster Values and posed for a gathering crowd for over an hour," Livingston said.
Hanae and her cousin Mica Livingston, 8, say they'd like to create several newspaper dresses to sell at a future Arts Walk.
But for now, Livingston said he hopes to create more outfits that are comfortable and durable enough for Hanae to "run and jump and play in."
During the mid-1980s, he created a "newspaper boy" costume entirely out of newspapers for a Halloween party. He said he'll never forget all of the attention that it drew, and how much fun it was to wear something so unusual.
He said he's glad Hanae's dresses draw so much attention.
"Her outfits seem to put light into the world around her," Livingston added.