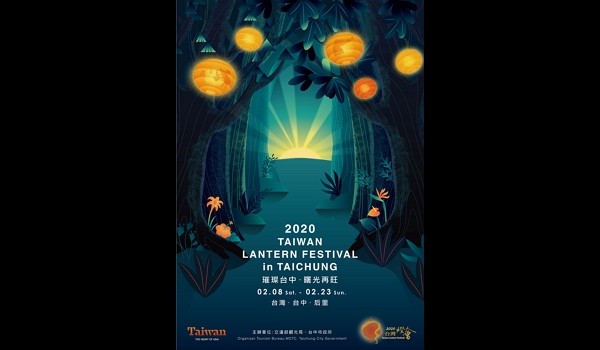 TAIPEI (Taiwan News) – Taiwan's Tourism Bureau has revealed the poster for the 2020 Taiwan Lantern Festival, which is designed around the theme of a fantasy forest.

The event poster was designed by Martin Yang, an honorary chairman of the Taiwan Graphic Design Association, according to CNA. The design depicts a local forest scene at twilight to lend it a "fantasy" effect, which serves as a welcome to all visitors and symbolizes the Lantern Festival lighting up Taiwan.

There is a forest lane on the poster, at the end of which one can see the sun rising from the horizon. The trees that flank the lane have lanterns dangling from their branches, and small flowers are blooming at the base of the trees.

Lanterns are not only the focal point of the festival; they also carry the historical significance of the skilled craft. Twilight represents hope for the future, and its pronunciation in Mandarin, "shu guang," resembles the word for rat, the Chinese zodiac sign for 2020, explained the Tourism Bureau.

The 2020 Taiwan Lantern Festival will use the same venues as the 2018 Taichung World Flora Exposition, which are suited for showcasing the ingenuity of the organizers and designers. The main show will be curated around the theme of "fantasy forest," with dreamy and mystic elements added to Taichung's characteristics.

The 16-day show will be held at Houli Horse Ranch (后里馬場) and Forest Expo Site (后里森林園區) next year from Feb. 8 to 23 and will consist of the "secret rainforest" and the "artistic world." The former features projection mapping, artistic installations, and parades; the latter displays a lantern-making activity, mechanical designs, and circus performances, according to the Liberty Times.

There will be a secondary exhibition at the Wen-Hsin Forest Park (文心森林公園), also located in Taichung, from Dec. 21, 2019 to Feb. 23, 2020. The park will be transformed into an amusement park right in the city center, with lantern displays, interactive installations, and various performances all centered around children and joyfulness.

A slew of sections are organized, each exhibiting different categories of design, including fairy tales, anime, and festivals at Wen-Hsin Forest Park; the circus, animals, and multimedia in the "artistic world"; and a train station, religions, and pokemon in the "secret rainforest." There will also be a light show at the tourist center, according to the Liberty Times.