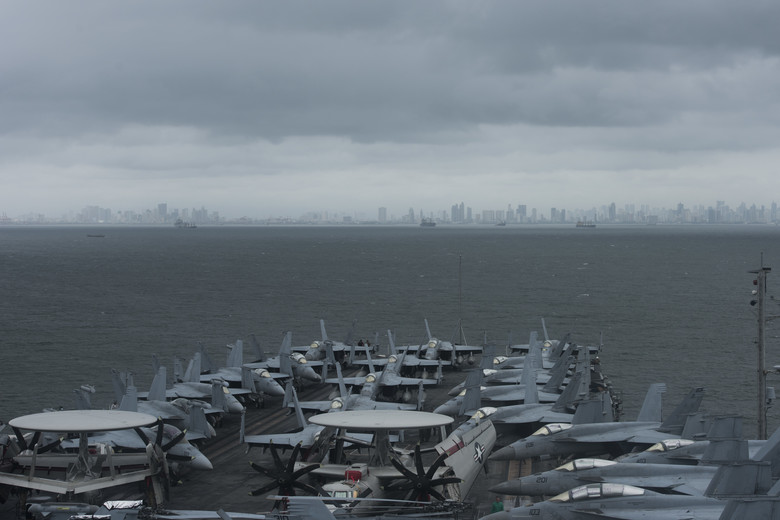 TAIPEI (Taiwan News) – On Wednesday (Aug. 7) the U.S. Navy’s Ronald Reagan Carrier Strike Group 5 made port in Manila after sailing through the South China Sea in what has been seen as a message from the U.S. to Beijing.

The journey of the USS Ronald Reagan through the contested South China Sea was reported on Tuesday (Aug. 6) as it was en route to the Philippines for a short port call. The Nimitz class aircraft carrier is accompanied by the Ticonderoga class guided-missile cruisers USS Chancellorsville and USS Antietam.

A press release from the U.S. Navy states that while in port, the U.S. and Philippine Navy will engage in senior leadership exchanges and engage in friendship and community-building exercises. The USS Ronald Regan previously visited Manila in late June of 2018.

Rear Admiral Karl Thomas, the commander of the strike group, told journalists earlier in the week that the motto of the USS Ronald Reagan is “peace through strength.” He stated that the strike group’s goal is to promote security and stability in a region that is rife with conflict over claims to waterways and island territories.

He was quoted by the U.S. Navy’s press release on the strike group’s visit to the Philippines.

"This port call is a direct reflection of the longstanding relationship between the U.S. and the Philippines and underscores our strong support to peace and stability in the Indo-Pacific region. Visiting the Philippines is always incredible and I’m glad that the officers and Sailors of Carrier Strike Group 5 will have the chance to deepen ties with our critical ally, while enjoying the culture and beauty of this wonderful country.”

The Military Times observed that the aircraft carrier’s most recent trip through the region comes after several confrontations between Chinese vessels and those of other claimants, including the Philippines, Vietnam, and Malaysia. Thomas acknowledged that the U.S. has a vested interest in ensuring that trade routes remain free and open in the Indo-Pacific and stated that the U.S. Navy’s goal is to ensure that territorial disputes can be solved in a peaceful manner.