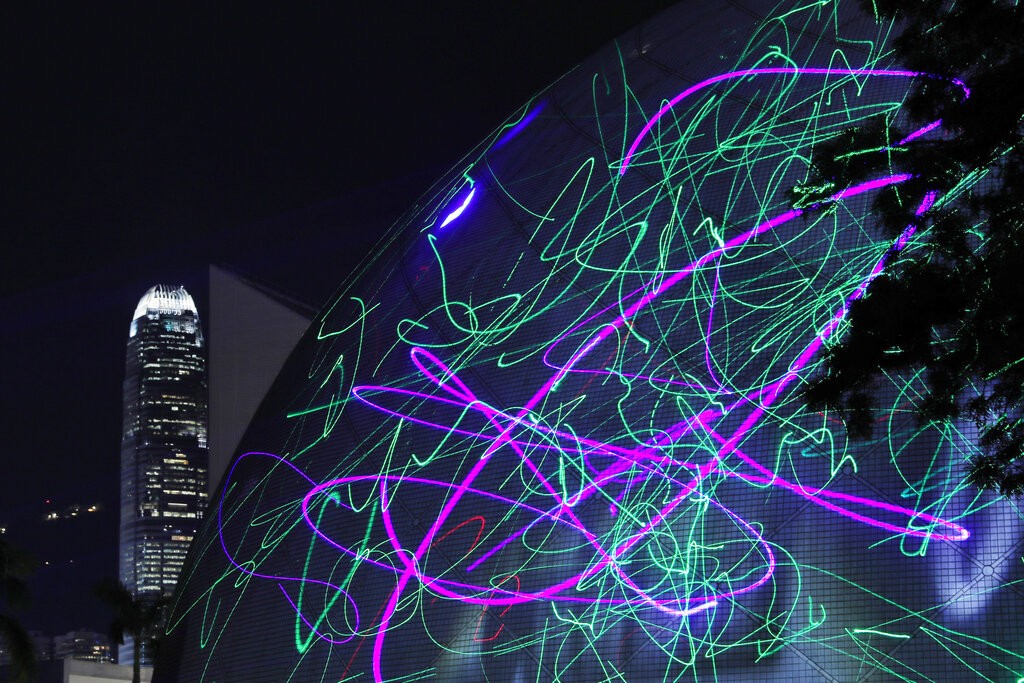 TAIPEI (Taiwan News) – Hong Kong protesters gathered in front of the Hong Kong Space Museum to “stargaze” with laser pointers, supporting a student who was arrested by the police for owning laser pointers, on Wednesday night (Aug. 7), the Stand News reports.

The chairperson of Hong Kong Baptist University's Students' Union, Fong Chung Yin (方仲賢), was arrested by the police for purchasing laser pointers, which the police called “assault weapons,” at Sham Shui Po on Tuesday night (Aug. 6). The arrest sparked a siege of the police station during which another nine Hong Kong residents, including legislative council member Wong Hok Lai (黃學禮), were arrested for “illegal assembly” or “assault on police.”

The police said during a conference on Wednesday that what Fong had bought was not just “laser pointers,” but highly concentrated “laser guns” with enough power to blind police. The police also demonstrated that the seized pointers could make a piece of paper start smoking by pointing the beam at it for ten seconds.

A journalist questioned whether the demonstration did not constitute “perverting the course of justice” through unauthorized use of evidence before a court session had even begun. However, the police denied this, claiming that they do not need authorization from the Department of Justice to use the items.

Attorney and former Legislative Council member Albert Ho Chun-yan (何俊仁) criticized the police for lacking “legal sense.” Ho said that the law does not even allow people to be arrested for simply owning a knife, which is inarguably a lethal item, let alone laser pointers, which are no different from umbrellas or pencils – capable of making someone blind but just “common items that can be legally bought anywhere.”

A group of Netizens claiming to be members of multiple student astronomical societies initiated a “stargazing” activity to teach the public how to use a laser pointer to locate a star, which was held in front of the Hong Kong Space Museum at 8 p.m. on Wednesday. The black shirts flocked into Sham Shui Po, which is now referred to as “arsenal” among the protesters, to buy laser pointers and gathered at Tsim Sha Tsui. The laser beams formed an unexpectedly beautiful sight, as though it was an amateur version of “A Symphony of Lights” (幻彩詠香江), the famous daily light and sound show at Victoria Harbour. To mock the police, a protester held a piece of paper in the middle of the crowd, asking them to burn the paper, but they failed and began sarcastically shouting “refund” for having mistakenly bought the “low-quality assault weapon.”