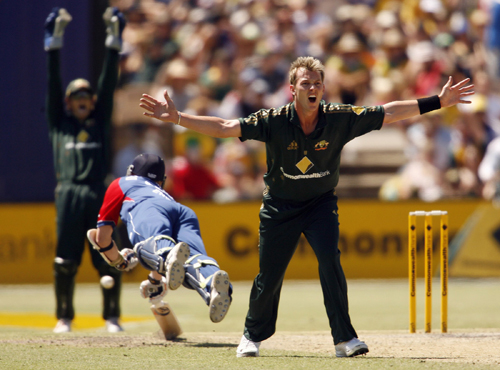 England's horror tour of Australia hit rock bottom yesterday when the home side routed them for just 110 and beat them by nine wickets in their triangular one-day series match at Adelaide Oval.
Australia cruised to the victory target, finishing on 111 for one from just 24.3 overs and claiming a bonus point in the process.
It was unbeaten Australia's fifth win and they are already guaranteed a berth in the tri-series finals, while the mentally shattered English are anchored at the foot of the table with just one win from five games.
With recalled paceman Mitchell Johnson claiming 4-45, the embattled English weren't even able to match their paltry score of 120 against New Zealand at the same venue on Tuesday, despite Australia resting first choice bowlers Glenn McGrath and Nathan Bracken.
The insipid effort equalled England's fourth-lowest score in one-day internationals and continued their alarming recent history of being unable to bat out their full complement of overs.
Worrying trend
In their past three one-day innings, they have managed just 155, 120 and 110 in a worrying trend.
The English lasted just 34.3 overs, enabling Australia to face 12 overs before the scheduled break in play, which is meant to separate the two innings.
Had it not been for the uncertain form of Australian opener Matthew Hayden, who also ran out Adam Gilchrist, the match might well have been over by the time the break came.
Former Australian captain Bill Lawry summed up England's plight well.
"Their fielding is sub-standard, their bowling is ordinary and their batting is shocking," he said in a grim assessment.
Jinxed ground
At the same venue where they infamously blew the second Ashes Test in December with a last-day batting collapse, interim England captain Andrew Flintoff won the toss and elected to bat.
His side looked to be doing okay when they were 2-72 and Ian Bell was in his best form of the one-day series.
However, Bell's dismissal for 35 triggered another ugly collapse by the English, who were embarrassingly inept at the crease and must simply be wishing their antipodean nightmare would come to a speedy end.
None more so than Flintoff, who hasn't had a single victory as captain on the tour and will be glad to hand the reins back to Michael Vaughan, who is expected to return from injury in England's next match.
Coach Duncan Fletcher will be another glad to see the back of Australia, with pressure mounting on his position with every on-field debacle.
Beaten 5-0 in the Test series in the first Ashes clean sweep by the Australians in more than 80 years, the English have enjoyed just one win since arriving Down Under in early November - a narrow one-day match victory against New Zealand.
The English have just eight wins in their last 32 one-day internationals as the World Cup looms.
Bell offered renewed hope for the English with some enterprising stroke-play, but once he fell the lack of fight from his teammates was telling, all 10 wickets falling to catches.
Paul Collingwood, who also dropped a chance in the field to cap a dark day, and Paul Nixon provided two of the softest dismissals you could ever see, lobbing up simple catches from the part-time spin of Andrew Symonds and Brad Hogg (2-16) respectively.
The 36-year-old Nixon's attempt to shield No.11 Monty Panesar was a comical failure and his record of 34 runs in five innings at 6.80 in his first international tournament must have other English wicketkeeper-batsmen scratching their heads.
At one stage, England lost 4-4 to slump to 9-107 as Johnson created havoc.
While Johnson was damaging, Brett Lee also continued his fine tri-series with 2-8 from eight overs.
Lee claimed the wickets of recent debutant Mal Loye (9), whose technique appears to have been found out at international level, and Tuesday's top-scorer Ed Joyce (11).
To make matters worse for England, they were without opening bowlers James Anderson and Jon Lewis, the pair joining Vaughan and Kevin Pietersen on the injured list.