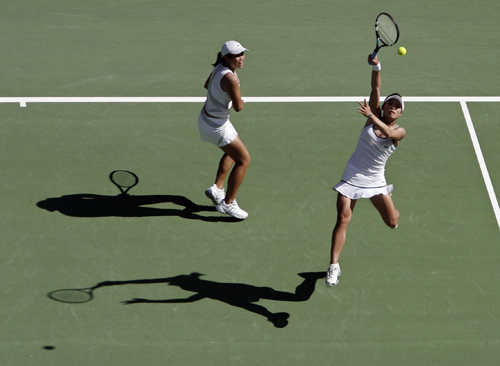 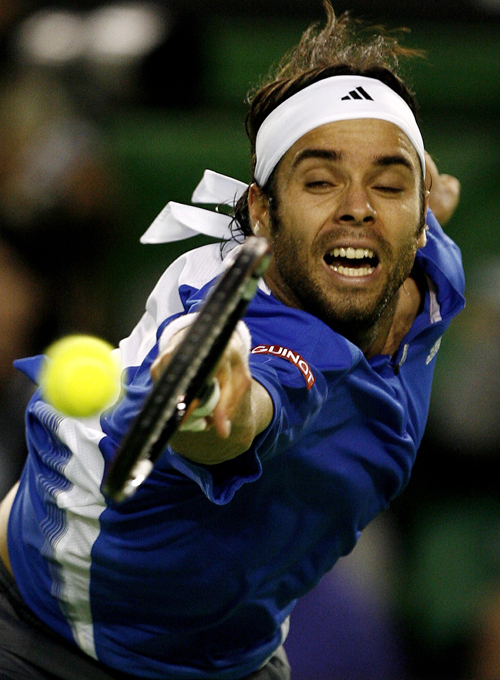 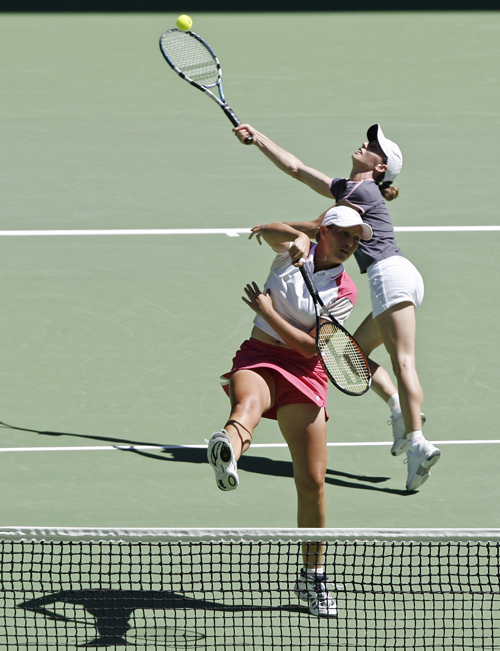 The Cinderella run of Taiwan's Chan Yung-Jan and Chuang Chia-Jung came to an end yesterday when they were beaten in the Australian Open women's doubles final by Cara Black and Liezel Huber.
The experience of Zimbabwean Black and South African Huber made the difference as they rallied past the rookie Taiwanese pair 6-4, 6-7 (4/7), 6-1 in 2hours 10 minutes.
Black and Huber, seeded three, are two of the WTA Tour's most decorated doubles players, winning Wimbledon in 2005 and finishing runners-up at the French Open in the same year.
In contrast, Chan, 17, and Chuang, 22, were wildcards here and playing only in their third Tour-level event together and their first major.
It was the first time that anyone from Taiwan had made a Grand Slam final and they put up a sterling fight before wilting under the hot Melbourne sun.
Proud girls
"We are very, very proud of our achievement, just to get as far as we did," said Chan, from Taipei.
"We did our best today. We started slowly, we didn't really know their game and we were a little nervous.
"But we got better and better in the second set and were more relaxed. In the third they put more pressure on. We're a little bit disappointed."
Despite their limited playing time together, Chan and Chuang clearly have an understanding on the court, winning their first event as a team in Seoul in 2005 and then finishing runners-up at the Japan Open in Tokyo last year.
Chinese scalps
They claimed defending champions Zheng Jie and Yan Zi of China among their scalps here.
Although Chan is the younger, she was dictating tactics on the court and showed a lot of flair and talent in the tournament, boding well for the future of Asian tennis.
"I want to focus on my singles as well as my doubles in the future," she said, though Chuang, from Kaohshing, said she preferred doubles and that would be where she put her efforts.
Both teams started solidly on Rod Laver Arena before Black and Huber snatched the advantage with a break in the fifth game and wrapped up the set in 39 minutes.
The second set was much tougher.
Black and Huber raced to a 4-2 lead but, led by Chan, the Taiwanese pair rallied to claw back to lead 5-4. Black and Huber held for 5-5 and then got the crucial break to go 6-5.
Black was serving for the game but nerves came into play and the Taiwanese pair broke back to take it to a tiebreak and they showed courage to get through 7/4 in a set that lasted one hour.
But it exhausted their resolve and they lost concentration, only winning one game in a one-sided third set to end their Australian dream.
Gonzalez on a roll
Tenth-seeded Fernando Gonzalez dominated Germany's Tommy Haas 6-1, 6-3, 6-1yesterday to reach the Australian Open final.
In a performance reminiscent of top-ranked Roger Federer's rout of Andy Roddick in the other semifinal a night earlier, Gonzalez was nearly flawless, leaving the 12th-seeded Haas stunned and frustrated with a brilliant array of shots that had the crowd gasping.
Gonzalez had zero unforced errors in the first and third sets and only three for the match to go along with 42 winners that accounted for more than half of his 82 points.
Gonzalez, who had never reached a Grand Slam semifinal before, will face Federer tomorrow evening in the championship match.
"Roger is No. 1 one by far," Gonzalez said. "I have lost many times to him, but I am playing much better than the last time that we played."
Once known for a weak backhand and a fragile psyche, Gonzalez has improved both significantly in recent months and has won over fans here with his powerful serve and forehand.
The Chilean ran off 11 points to start the first set, and Haas ended up with only 12 points in the seven games.
Gonzalez slipped only slightly in the second set with 12 winners and three unforced errors as Haas, his confidence shattered, spiked his racket once and came close to slamming it into the court on two other occasions.
Picking on the backhand
Haas tried to pick on Gonzalez's backhand, but the Chilean just kept getting back slice after slice until he got a chance to wind up on a forehand and send zingers into the corners.
Gonzalez, who never faced a break point, finished it off with a backhand crosscourt winner for his seventh service break.
In other selected action at the Australian Open yesterday: Mixed Doubles' semifinals; max Mirnyi (Bulgaria)/ Victoria Azarenka (Bulgaria) beat Jonas Bjorkman (Sweden x4)/Francesca Schiavone (Italy x4) 6-2 6-3; Daniel nester (Canada)/Elena Likhovtseva (Russia) beat Kevin Ullyett (Zimbabwe x7)/Liezel Huber (South Africa x7) 6-2 7-5.