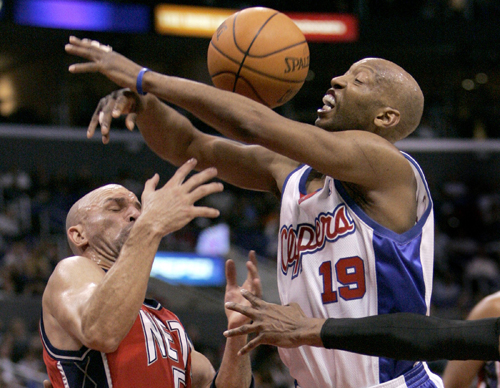 The New Jersey Nets tried to reverse the trend that's been haunting them this season and on this long West trip. But in the end, they suffered another deflating defeat in the closing seconds.
Cuttino Mobley's three-pointer with six-tenths of a second left lifted the Clippers to a 102-101 victory Thursday night at the Staples Center. It was the Nets' third straight one-point loss, and second in a row in the last second.
After giving up huge leads in the first two games and losing both, the Nets erased an 18-point lead in this game. They led by one with 1:07 left, but couldn't convert after that.
On the Nets' final play, Jason Kidd threw an inbounds lob to Vince Carter, but he couldn't tap it in. Carter finished with 33 points. Bostjan Nachbar had 17 and Marcus Williams 16 for the Nets (20-23).
The Nets are 0-3 on this five-game trip. These three were considered the most winnable as they close out the trek at Denver and Utah. Overall, the Nets are 0-7 on the road against the West so far this season.
The Nets survived a scary moment late in the third. Carter turned his left ankle after knocking down a three. Corey Maggette came down on Carter's foot. He fell down and lay there reaching for his ankle for several moments. But after a timeout Carter returned and launched a long three to show he was fine.
The Nets are having a hard enough time holding on to big leads, so they can't afford to have Carter join Richard Jefferson (ankle surgery) and Nenad Krstic (torn ACL) on the inactive list.
But they got big second-half play from Carter and the bench. The score was tied at 97 after two Jason Collins foul shots with 2:28 left.
After the Clippers came up empty on their end, Kidd fed Nachbar for a three from the baseline that gave the Nets a 100-97 lead with 1:32 left.
On the ensuing trip, Maggette made two from the line to cut it to one. It was 101-99 with 1:07 left after Kidd made one of two from the line.
Kidd atoned for the miss by blocking Quintin Ross' shot attempt on the Clippers' next trip, leading to a Nets' run-out. They couldn't convert as Nachbar's layup was blocked.
But the Clippers couldn't convert on their end as Sam Cassell missed a three. It went out of bounds off Los Angeles with 32.7 seconds left.
Following a timeout, Kidd missed a three-pointer that didn't hit the rim. Nachbar tried to track it down, but it ended up being a 24-second shot-clock violation, giving the Clippers the ball with 8.7 seconds left.
Cassell drove and kicked it out to Mobley for the three from the right wing.
Following the Nets' gut-wrenching last-second loss to the Warriors on Wednesday - their second straight one-point defeat after leading by at least 16 - coach Lawrence Frank and his players didn't seem too broken up. But before Thursday's game, Frank painted a different picture.
"We're disappointed. We're disappointed that we let two opportunities slip away. At the same time we're not getting it back, so we have to try and make it up some other way," he said.
That anger didn't translate onto the court early, as the Nets trailed by 17 at the half and were down 62-44 with 9:01 left in the third after two Mobley free throws.
In the fourth, Nachbar and Williams accounted for 14 of the Nets' first 19 points. A Nachbar lay-in, from Carter cut the Clippers' lead to 88-84 with 8:19 left.
After Los Angeles went ahead 92-84, Nachbar canned a three and Kidd scored on a driving layup to bring the Nets within 92-89 with 6:03 left.
Instead of being ahead by double figures, which the Nets had been in their prior seven games, they let the Clippers build a large first-half cushion.
In other NBA action on Thursday: Chicago 96, Dallas 85.