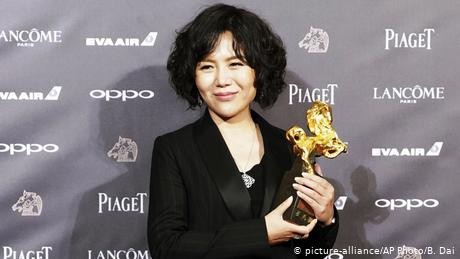 China's national film board said on Wednesday that it was barring mainland Chinese directors, actors and films from taking part in one of the Asian film industry's most prestigious awards ceremonies in Taiwan.

"China Film Administration says that it will suspend mainland movies and their personnel from participating in 2019 56th Golden Horse Awards," said a post on China Film News, a newspaper affiliated with the government film regulator.

The Golden Horse Awards, known as the Chinese-speaking world's version of the Oscars, sparked controversy last year after a Taiwanese director called for independence during her acceptance speech.

The brief post did not give a reason for the move and it was unclear whether last year's speech may have influenced the decision.

'Culture has no borders'

"Culture has no borders and art especially should not face political barriers," he added. "No matter what the reason, it's not a smart move to prevent those in arts and culture from participating in this sort of a film industry event that encourages free creation and welcomes multiple viewpoints."

Organizers of the Golden Horse Awards said that it regretted the move, but said that the jury selection and awards ceremony would continue as usual this year.

The announcement on Wednesday comes a week after China issued a ban on solo travel to Taiwan "due to current cross-strait relations."

Besides cutting the number of Chinese visitors to Taiwan, Beijing has been luring away diplomatic allies in order to increase pressure on the island, while both sides have carried out military drills.

China sees Taiwan as part of its territory awaiting unification, although the island split from the mainland following a civil war in 1949 and is ruled separately.

Tensions between Beijing and Taipei have particularly soured since the election of Taiwanese President Tsai Ing-wenin 2016; she is known for her pro-independence stance.