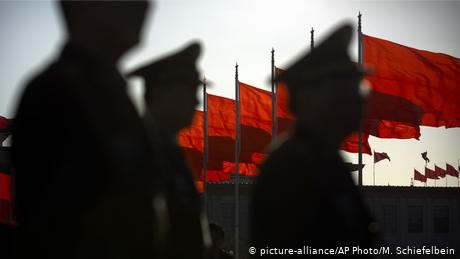 The Chinese government on Tuesday warned the White House against moving forward with plans to deploy intermediate-range missiles in Asia after the collapse of a key Cold War-era treaty regulating their use.

"China will not stand idly by and will be forced to take countermeasures should the US deploy intermediate-range ground-based missiles in this part of the world," said Fu Cong, director of the Chinese Foreign Ministry's arms control department.

Fu urged "our neighboring countries to exercise prudence and not to allow a US deployment of its intermediate-range missiles on (their) territory."

He mentioned Australia, Japan and South Korea. However, the Australian government on Monday dismissed rumors that it would host the new missiles, saying it had not been approached by the White House. Some observers believe the US territory of Guam could be under heavy consideration.

Read more: Opinion: Scrapping the INF treaty is risky — and a lost opportunity

US Defense Secretary Mark Esper made waves last week when he announced plans to deploy ground-based intermediate-range conventional missiles "sooner rather than later."

"I would prefer months," Esper told reporters a day after the White House withdrew from the Intermediate-Range Nuclear Forces Treaty. The US cited alleged violations by Russia for its decision to withdraw from the accord.

Esper noted that the plans to strategically deploy the missiles in Asia would raise tensions with China at a moment when Beijing and Washington are locked in a widening trade war.

"Eighty percent plus of their inventory is intermediate-range systems, so that shouldn't surprise them that we would want to have a like capability," he said.

European officials have expressed concerns that the continent's security is in jeopardy following the treaty's collapse. German Foreign Minister Heiko Maas has called for renewed efforts in "disarmament and arms control in order to prevent a new nuclear arms race."

The Cold War-era treaty concluded by the US and then-Soviet Union in 1987 restricted the use of conventional and nuclear missiles with a range of 500 to 5,000 kilometers (310 to 3,100 miles). It was hailed at the time as a historic diplomatic feat that made the world safer.

Read more: Vladimir Putin warns US not to start an arms race