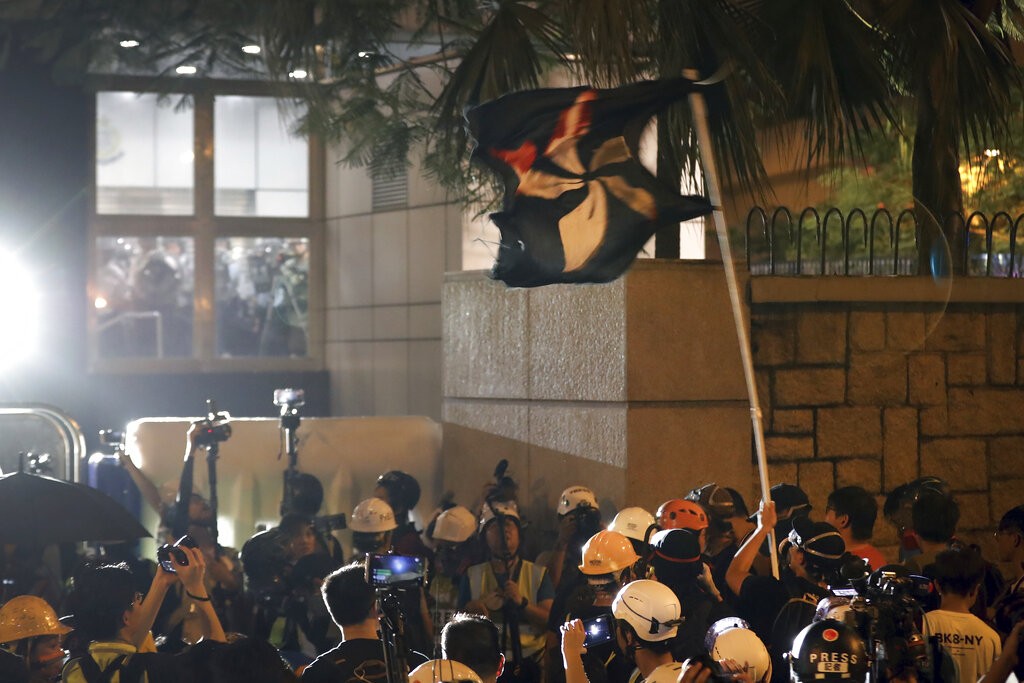 TAIPEI (Taiwan News) – Hong Kong police tore the skirt and underwear off a young female protester in Tin Shui Wai on Sunday (Aug. 4) at midnight while arresting her, enraging residents who then surrounded the Tin Shui Wai Police Station and protested for approximately 10 hours on Monday, the Stand News reports.

Video clips and photos showing a defenseless female citizen’s skirt get ripped off and underwear loosened while being surrounded, carried away, and arrested by more than six police officers went viral. Hong Kong Police spokesperson Yu Hoi Kwan (余鎧均) claimed that the skirt was accidentally torn off because the protester refused to be arrested and “struggled too much” during a conference at 4 a.m. on Monday. The arrested female protester was successfully bailed out with the help of lawyers in the morning. However, Tin Shui Wai, an outlying district, had already become the locus of public outrage and saw the longest, largest scale protest of a police station during Monday's city-wide strike.

Many feminist groups and Dr. Petula Ho (何式凝), a professor specializing in gender issues at the University of Hong Kong, were also present to condemn the police for having violated basic human rights, sexually humiliating a female citizen, and committing indecent assault. The unplanned assembly began around 1 p.m., and the tension began to rise as more protesters showed up holding signs reading “sexual violence of the police” and loudly calling the police “perverts” and “rapists.”

The police began to shoot at the crowd with rubber bullets at around 7 p.m. without prior warning and arrested 76 people, comprising more than 80 percent of the total arrested protesters on Monday. The rest of the crowd fell back to a safe distance but refused to disperse until 11 p.m.

The female protester, now known as the Tin Shui Wai girl by netizens, reported her safety via LIHKG, an online forum that has become the most important information-sharing platform during the ongoing protests, saying that she was unharmed aside from a few bruises and was taken care of by female police officers after her arrest. However, she claimed that a number of male police officers had sworn at her in Cantonese while she desperately shouted “my skirt” and “female police.”

The young woman said that, although she could imagine it becoming “an indecent scene” on the news, she “did not even shed a tear” and calmly exercised her right to silence after being arrested. She also told netizens that she did not mind her story or even the footage being known to the public if it could make more Hongkongers aware of the unrestrained police violence.

The Tin Shui Wai girl also said she felt even more distressed and heartbroken to see “brothers and sisters” bleeding on the front lines and “martyrs” committing suicide to protest against Hong Kong's extradition bill and police violence.