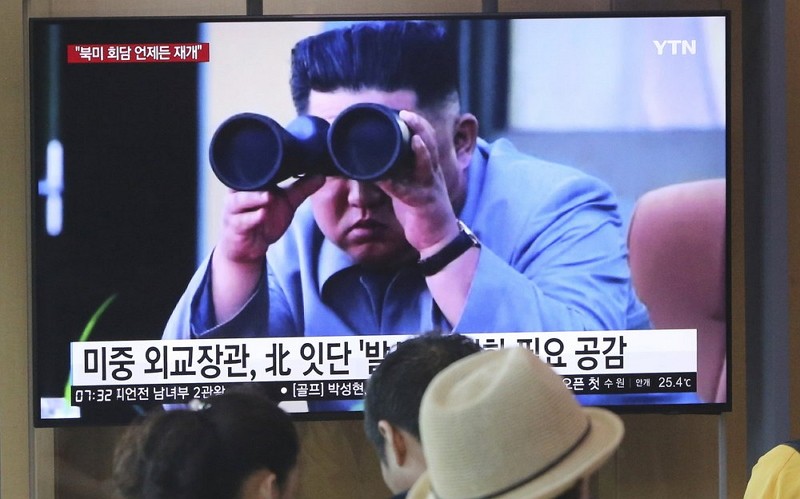 SEOUL, South Korea (AP) — North Korea continued to ramp up its weapons demonstrations by firing two presumed short-range ballistic missiles into the sea Tuesday while lashing out at the United States and South Korea for continuing military exercises that the North says could derail fragile nuclear diplomacy.

North Korea’s fourth round of weapons launches in less than two weeks came amid a standstill in nuclear negotiations and after President Donald Trump repeatedly dismissed the significance of the country’s recent tests despite the threat the weapons pose to ally South Korea and U.S. bases there.

Experts say Trump’s downplaying of the North’s weapons display has allowed the country more room to advance its military capabilities as it attempts to build leverage ahead of negotiations, which could possibly resume sometime after the end of the allies’ drills later this month.

South Korea’s military alerted reporters to the launches minutes before the North’s Foreign Ministry denounced Washington and Seoul over the start of their joint exercises on Monday. The ministry’s statement said the drills, which North Korea sees as an invasion rehearsal, leave the country “compelled to develop, test and deploy the powerful physical means essential for national defense.”

The statement from an unidentified spokesperson said Pyongyang remains committed to dialogue, but it could seek a “new road” if the allies don’t change their positions.

“It is too axiomatic that a constructive dialogue cannot be expected at a time when a simulated war practice targeted at the dialogue partner is being conducted,” said the statement. “We remain unchanged in our stand to resolve the issues through dialogue. But the dynamics of dialogue will be more invisible as long as the hostile military moves continue.”

Seoul’s Joint Chiefs of Staff said the two projectiles the North flew cross-country were likely short-range ballistic missiles. They were launched early Tuesday from an area near the North’s western coast and traveled about 450 kilometers (279 miles) on an apogee of 37 kilometers (23 miles) at a maximum speed of above Mach 6.9 before landing in waters off the country’s eastern coast, the JCS said.

It said the projectiles showed similar flight characteristics to short-range missiles North Korea fired on July 25, which traveled about 600 kilometers (373 miles) during launches the North described a “solemn warning” to South Korea over its plans to continue military drills with the United States.

South Korea’s military had said the flight data of the July missiles showed similarities to the Russian-made Iskander, a solid-fuel, nuclear capable missile that is highly maneuverable and travels on lower trajectories compared to conventional ballistic weapons, improving its chances of evading missile defense systems. The North last week also conducted two test firings of what it described as a new multiple rocket launcher system.

Analysts say the new North Korean weapons, which are fired from vehicles and difficult to detect before launch, would significantly enhance its ability to strike targets in all of South Korea.

Japan said the projectiles did not reach its territorial waters or exclusive economic zone. Tokyo’s defense minister, Takeshi Iwaya, said the North’s efforts to advance its missile capabilities are a serious threat to the region.

North Korea had said it will wait to see if the allied exercises take place to decide on the fate of its diplomacy with the United States and whether to continue its unilateral suspension of nuclear and long-range missile tests, which leader Kim Jong Un announced last year amid a diplomatic outreach to Washington.

South Korea’s Defense Ministry has not provided details about the drills, which were expected to be computer simulated and not involve actual combat troops and equipment.

Shin Beomchul, a senior analyst from Seoul’s Asan Institute for Policy Studies, said North Korea is trying to strengthen its bargaining position with Washington, which has so far rejected Pyongyang’s demands for sanctions relief in return for piecemeal steps toward partially surrendering its nuclear capabilities.

By demonstrating weapons that directly threaten South Korea but not the U.S. mainland or its Pacific territories, North Korea is also dialing up pressure on Seoul to coax major concessions from the Washington on behalf of Pyongyang, Shin said.

The allies have scaled down their major military exercises since last year as Trump and Kim began their nuclear summitry. But the North insists even the downsized drills violate agreements between the leaders.

The North’s recent tests have dampened the optimism that followed the third and latest summit between Trump and Kim on June 30 at the inter-Korean border. The leaders agreed to resume working-level nuclear talks, but there have been no known meetings between the two sides since then.