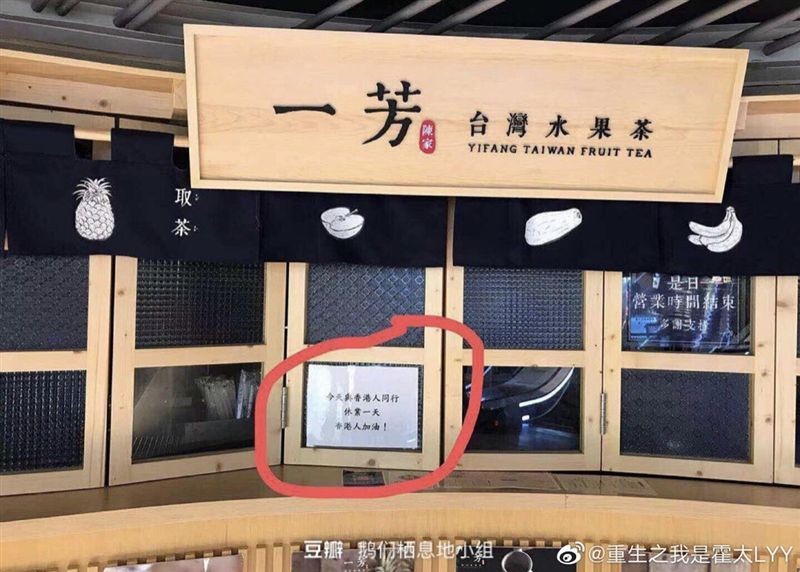 TAIPEI (Taiwan News) -- Well-known Taiwan tea brand Yi Fang Fruit Tea (一芳水果茶) suddenly took to Weibo on Monday (Aug. 5) to kowtow to Beijing by swearing its support for the tattered "one country, two systems" framework and condemning the anti-extradition bill protests in Hong Kong, prompting many Taiwanese to curse the company and threaten a boycott.

On Monday, Taiwan's Yi Fang Fruit Tea, which has many shops around the world, on Weibo pledged its obedient allegiance to the broken "one country, two systems" framework and expressed is opposition to the anti-extradition bill protests in Hong Kong. The company also said that it would terminate its contract with an Yi Fang franchise branch which had gone on strike without permission.

Taiwanese netizens were incensed by the move and said they would "refuse to drink it" and that "This turned out to be the nail in the coffin for fruit tea." They criticized Yi Fang for "only seeking profits and having no conscience" and that it has simply become "Yi Fang Chinese tea."

Others admonished Yi Fang's Weibo account to not "use Taiwan's name indiscriminately." The following is the full text of Yi Fang's statement released on Weibo:

"Today, some internet users have filmed and disseminated pictures of an Yi Fang shop, which wrote a description [together with the people of Hong Kong] and posted outside. Here, we would like to make a statement to the public that we firmly support one country, two systems and look forward to Hong Kong's prosperity and stability. We strongly condemn and resolutely oppose violent strikes. The recent demonstrations in Hong Kong have seriously affected the operation of Hong Kong stores, and they are deeply saddened.

Up to the time of submission, it has been confirmed that the store is not a direct operation, but a franchise shop. And its behavior is also the individual advocacy of the shop, which has nothing to do with the company's position. Effective immediately, the offending shop has taken the action of closing its doors. If there is any violation of the law and contempt for the state, it will be severely punished and we reserve the right to further investigate the legal liabilities.

Thank you for your support and attention. We apologize to all the people for the adverse impact of this incident on the general public. In the future, we will work on strengthening the deepening of our brand management and business philosophy, and we thank our partners for their trust and help.

Yi Fang will never tolerate any attempt to split apart the country! Apart from the individual government recommendations and safety considerations, 20 Yi Fang Hong Kong stores are still continuing to stay open outside the core protest areas. We strongly oppose strikes and violence and Yi Fang Fruit Tea will continue to operate!"

Taiwanese franchises have already felt the wrath of irate Taiwanese consumers, and individual branches have taken to Facebook to say things such as, "the behavior of the head office does not represent the political positions of their branches." Within three hours of the news breaking, furious Taiwanese posted over 6,400 angry comments on the company's Facebook page.

At 10:30 p.m. on Monday evening (Aug. 5), New Power Party Legislator Hung Tzu-yung (洪慈庸) took to Facebook to lament that she is afraid this is not the last time the country will see the "political kneeling" of a Taiwanese brand. Near midnight Tuesday morning, the general agent for Yi Fang Hong Kong issued a statement saying that the messages circulating on the internet had nothing to do with it, reported ETtoday. 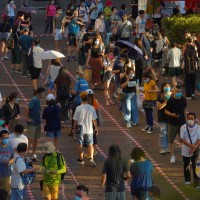 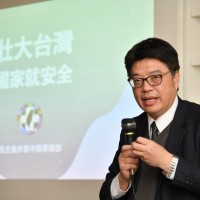