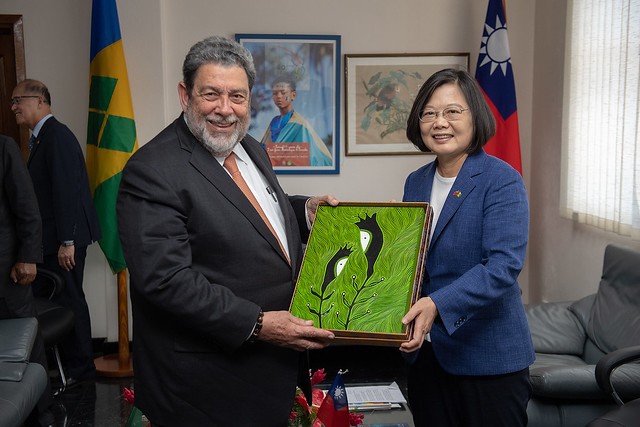 TAIPEI (Taiwan News) — Prime Minister of Saint Vincent and the Grenadines Ralph Gonsalves will inaugurate the country’s embassy in Taiwan during a week-long visit to the island nation.

Gonsalves will spend a week in the country, from Tuesday (Aug. 6) through next Monday, commented the Ministry of Foreign Affairs (MOFA). Taiwan currently has 17 official allies.

The Vincentian government is the only one of Taiwan’s allies not to have established an embassy in Taipei, after the two countries forged ties in 1981. The establishment of an embassy symbolizes firm relations and close collaboration between the two nations, said MOFA.

The decision came shortly before President Tsai Ing-wen (蔡英文) arrived in St. Vincent on July 16 as part of her Caribbean tour. The Vincentian ambassador is reportedly a woman, but authorities have yet to confirm the name.

The two countries will deepen exchanges and further improve political and economic ties, MOFA said. Taiwan and its Caribbean ally will also collaborate on financial issues and combating crime, following the signing of agreements by the two countries in St. Vincent, the ministry added.

During his stay in Taiwan, Gonsalves will meet with the president and be welcomed by a military salute and state banquet, according to MOFA.

The prime minister will visit a number of public and private organizations in the Taipei metropolitan area and in Tainan City. He will also meet with Vincentian students to get a better understanding of their lives and studies in Taiwan.