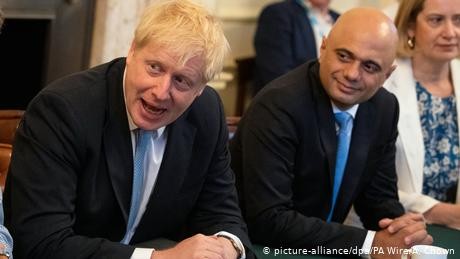 John McDonnell, financial spokesman for the UK's opposition Labour Party, said on Monday that he had written to Boris Johnson requesting that he reconsider Sajid Javid's suitability to serve as Britain's Chancellor of the Exchequer.

McDonnell raised three areas of concern pertaining to Javid's banking career during which he worked at Deutsche Bank:

The finance minister's post is broadly seen as the second most powerful in the British government; its occupant resides in 11 Downing Street, next to the PM.

In his letter, McDonnell also called for Johnson to investigate Javid's personal tax affairs. The new chancellor, who — according to reports cited by London's Evening Standard newspaper — was paid about £3 million per year (€3.25 million, $3.64 million).

McDonnell said there was evidence that would raise alarm bells over Javid's suitability to look after Britain's finances. He also questioned whether Javid benefited from a tax avoidance scheme while employed at Deutsche Bank.

Britain's Mail on Sunday newspaper reported in 2014 that Javid opted into a scheme known as “dark blue” that channeled bankers' bonus payments through the Cayman Islands.

McDonnell said: "It critically undermines this government's response to the scourge of tax avoidance for the chancellor to stand accused of this practice."

"Every penny avoided in tax by wealthy large corporations is a penny taken from our desperately underfunded public service."

The Labour spokesman also cited conclusions from a US Senate subcommittee which looked into the bank's activities in the run-up to the financial crisis.

McDonnell said that Javid was a senior office holder at Deutsche Bank around the time that committee concluded it had inflicted "material damage to ordinary people and the wider global economy."

A Conservative spokesman said: "Frankly, Labour might want to use the time better thinking about their own credentials for governing. Not content with anti-Semitism being rife in their party and their totally incoherent Brexit policy, the only threat to the UK economy is them."

Deutsche Bank was one of a series of lenders guilty of selling and pooling toxic financial products in the lead-up to the 2007 and 2008 financial crisis.

The US attorney general at the time, Loretta Lynch, said that "Deutsche Bank did not merely mislead investors: it contributed to an international financial crisis."