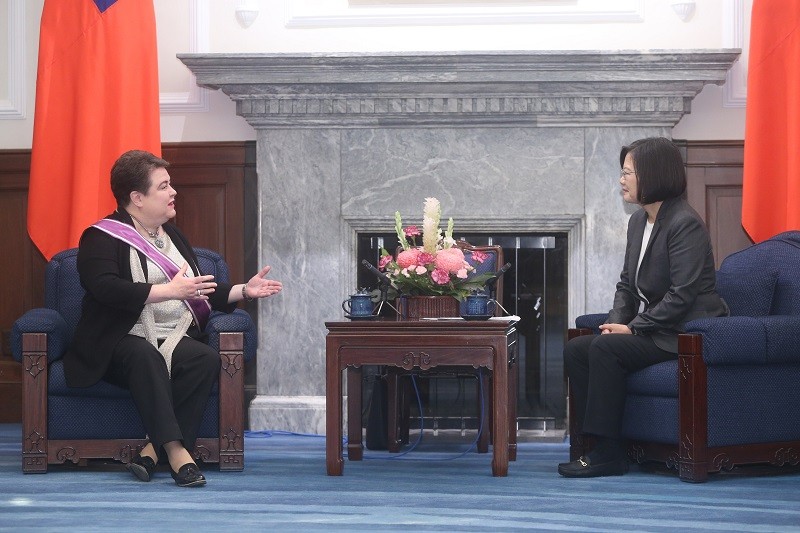 President Tsai Ing-wen (蔡英文) on Monday conferred the Order of Brilliant Star with Violet Grand Cordon on Madeleine Majorenko, outgoing head of the European Economic and Trade Office, for her contribution to promoting bilateral relations.

Majorenko assumed the post in July 2015 and will step down later this month.

"It's a personal pleasure for me to receive an award from you," Majorenko told Tsai during the ceremony at the Presidential Office,adding that during her time in Taiwan she has seen Tsai's inauguration, her administration in power and its work that has seen Taiwan flourish.

Majorenko said she has been in Taiwan for four years and had a lot of fun aside from all the hard work, because Taiwan and the European Union have achieved much together, including holding dialogues in different areas.

Noting that many people have asked her what she will miss most about Taiwan, Majorenko said there are many things, but she will especially miss the Taiwanese people.
Taiwan's people are hard working, innovative and always committed to serving. That's one strength, she said, adding that another is their warmth, friendliness and openness.

Taiwan has one strength that is undeniable, its democratic system, respect for human rights, rule of law and democracy. That is why the EU has deemed Taiwan a like-minded partner, Majorenko added.

With such people, democracy and human rights, Majorenko said the future of Taiwan is bright and bilateral relations between Taiwan and the EU will go from strength to strength.

"I'm very proud to be here with such an incredible female president in Taiwan," she said.