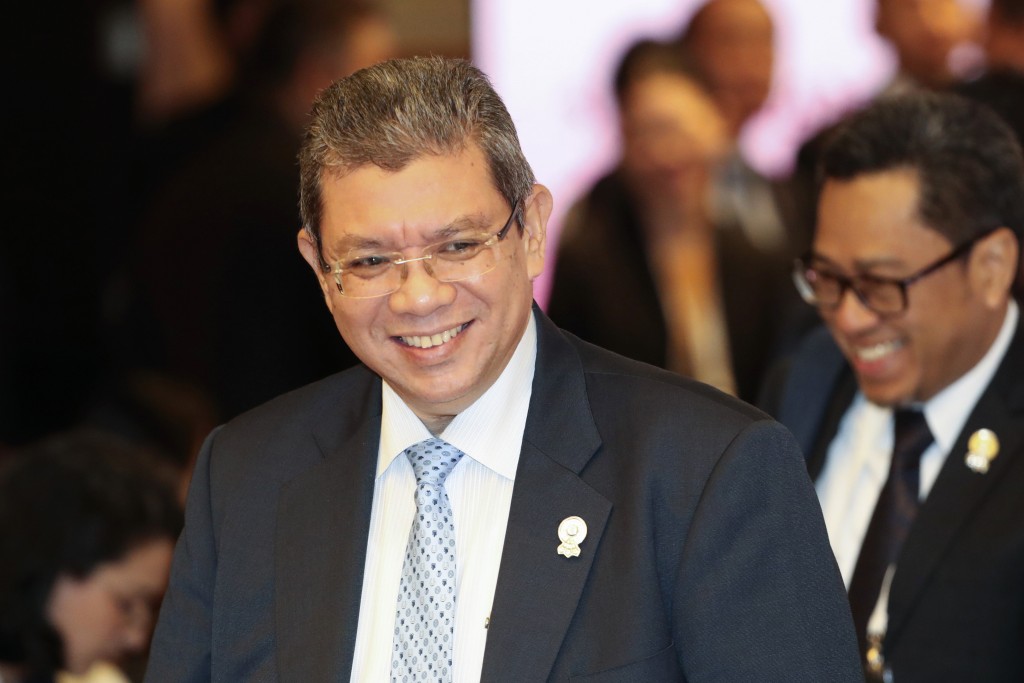 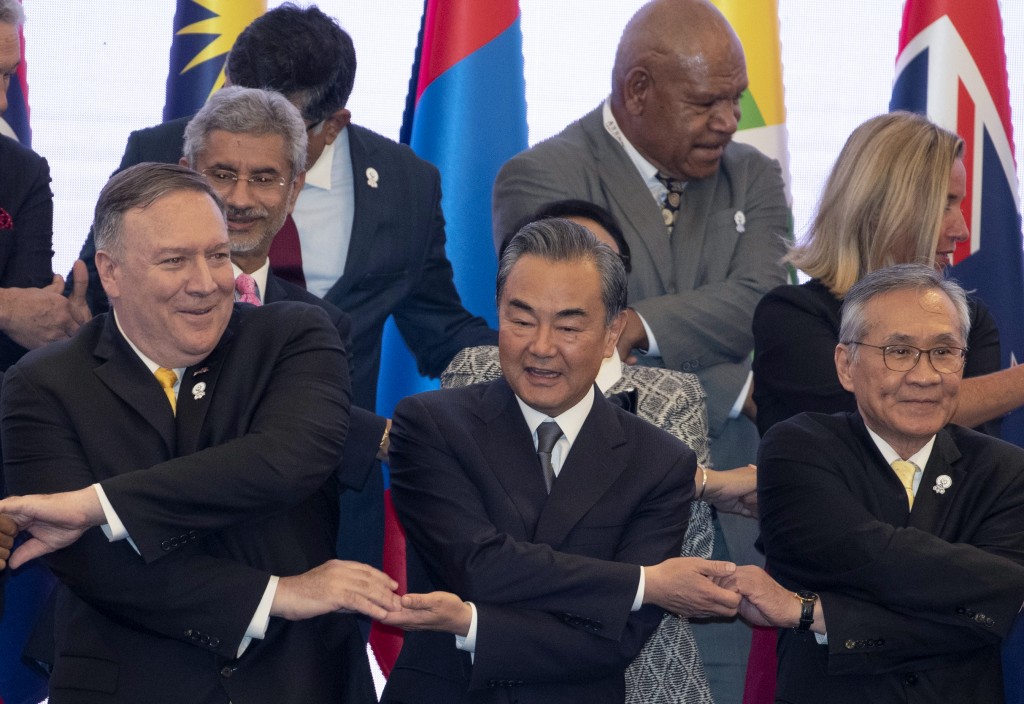 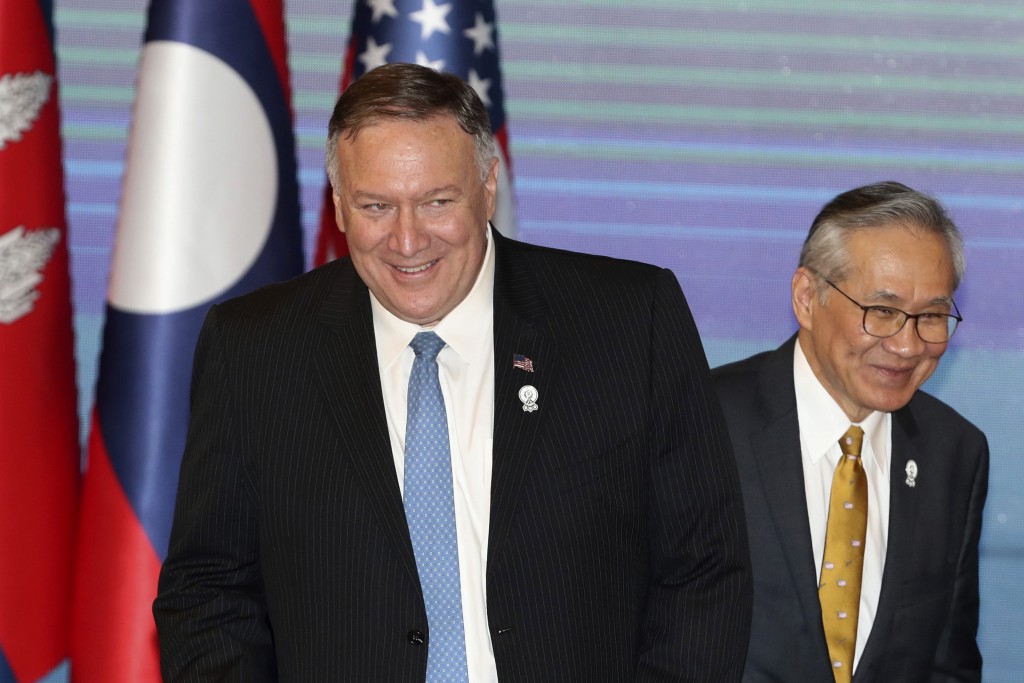 BEIJING (AP) — A look at recent developments in the South China Sea, where China is pitted against smaller neighbors in multiple disputes over islands, coral reefs and lagoons. The waters are a major shipping route for global commerce and rich in fish and possible oil and gas reserves.

MALAYSIA: TOO MANY WARSHIPS IN S. CHINA SEA

Malaysia's foreign minister says countries in the region are concerned about rising tensions over the growing numbers of warships plying the South China Sea.

Saifuddin Abdullah said Saturday that foreign ministers from the 10 countries of the Association of Southeast Asian Nations stressed the importance of non-militarization of the waterway. China has built military installations on several of its island holdings, while the U.S. and other countries challenge the claims by flying and sailing nearby in what are termed freedom of navigation operations.

"We should lessen the presence of warships in the disputed waters to ensure peace and stability, safety and freedom of navigation in the South China Sea," Abdullah was quoted as saying by Malaysia's official Bernama news agency.

"It is a free passage, but when there are too many, we are worried," he said.

A July report by the Asia Maritime Transparency Initiative said Chinese Coast Guard vessels had harassed Malaysian and Vietnamese oil and gas operations in contested waters, raising the possibility of confrontation. The Initiative is administered by the Center for Strategic and International Studies in Washington, D.C.

Chinese Foreign Minister Wang Yi says Beijing will not let anyone block its right to development, including in the South China Sea, which China claims virtually in its entirety.

"It is neither fair nor possible to try to obstruct China's development," Wang said in remarks Thursday to reporters provided by the Chinese delegation after talks with U.S. Secretary of State Mike Pompeo on the sidelines of a Southeast Asian regional meeting in Bangkok. "China's development is peaceful with strong internal impetus. It will not be stopped by anyone."

Wang said he asked the U.S. to "exercise prudence in words and deeds" after making clear China's position on the South China Sea, its treatment of Muslims in China's northwestern Xinjiang region and pro-democracy protests in Hong Kong during the meeting.

He also urged the U.S. to abide by the one-China policy and deal with Taiwan-related issues with caution, in reference to U.S. weapon sales to Taiwan, which China considers part of its territory.

POMPEO: US NOT ASKING NATIONS TO TAKE SIDES

U.S. Secretary of State Mike Pompeo says Washington isn't asking any Asian nation to take sides as it engages with the region where China is battling for influence and aggressively expanding territorial claims in the South China Sea.

Pompeo on Thursday hailed an Indo-Pacific engagement framework adopted by ASEAN leaders in June, saying it supports sovereignty, transparency, good governance and a rules-based order, among other things.

The U.S.-China rivalry, fueled by their current trade disputes, has put the Southeast Asian bloc in a tight spot, and the new framework is aimed at finding a middle ground to keep on the good side of both Washington and Beijing.

"Look, we don't ever ask any Indo-Pacific nations to choose between countries," Pompeo said in a speech at an annual meeting with his Southeast Asian counterparts. "Our engagement in this region has not been and will not be a zero sum exercise. Our interests simply naturally converge with yours to our mutual benefit."

The U.S. Navy, Marine Corps and Coast Guard, and the Indonesian navy and marine corps, are holding annual drills.

The Cooperation Afloat Readiness and Training (CARAT) drills, first held in 1995, kicked off Thursday in the Indonesian port of Surabaya and will feature hundreds of personnel from both nations. They will conduct both on-shore and at-sea training, such as search and seizure drills, mobile dive and salvage, gunnery exercises, explosive ordnance disposal drills and jungle warfare training.

Other components will include exchanges of knowledge in maritime domain awareness, medicine, aviation, law and explosive ordnance disposal.

CARAT, the U.S. Navy's longest-running exercise in South and Southeast Asia, "strengthens partnerships between regional navies and enhances maritime security cooperation throughout the Indo-Pacific," The Navy said in a news release.

Indonesia doesn't have overlapping territorial claims in the South China Sea, but has grown increasingly vigilant about foreign activities, especially those by China, in its exclusive economic zone.

The Philippine defense chief criticized China for what he called "bullying" actions in the South China Sea and said Beijing's peaceful assurances contrast with its behavior in the contested waters.

"They (China) say we do not bully people around, they follow international law, but I said you are not, what you are telling is not what you are doing on the ground," Defense Secretary Delfin Lorenzana said last week in one of his most stinging public rebukes yet of Chinese actions in territories claimed by Beijing, Manila and four other governments.

Unless China does what it says, its words will be doubted and Filipinos will continue to look at Beijing with mistrust, said Lorenzana, a retired army general. He cited China's low trust ratings in local opinion polls compared to those of the United States, a treaty ally of the Philippines.

Lorenzana called China's takeover of the Scarborough Shoal following a protracted 2012 standoff as "bullying." The United States brokered a deal for the simultaneous withdrawal of Chinese and Philippine ships from the vast fishing shoal, but Beijing reneged, prompting the Philippines to bring its disputes with China to international arbitration the following year, according to Philippine officials.