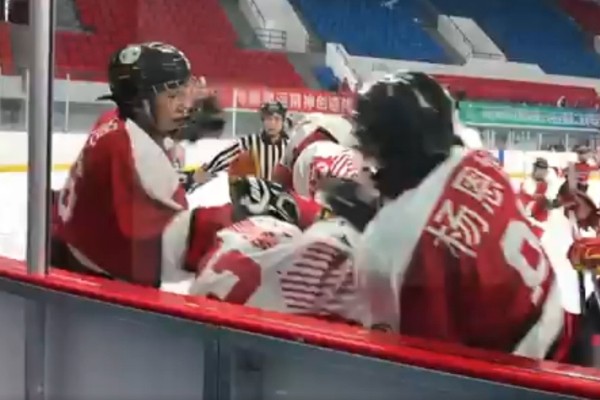 In video footage of the fight uploaded across multiple social media platforms, two Chinese players can be seen ganging up on and viciously beating a Hong Kong player with the number 23 on his jersey. In the background, a woman can be heard shouting repeatedly at the top of her lungs in English "Stop it, stop it!"

Multiple other fights can be seen in the background, with Chinese players appearing to be the aggressor in every case. The South China Morning Post identified the Hong Kong player being assaulted by two Chinese as Jonathan Wong.

There were no reports of injuries. The National Youth Games are held for athletes under the age of 19.

According to the Daily Caller, the three main unwritten rules in hockey fights are that there is "no hair pulling, no double-teaming and no hitting a player who has fallen to the ice." Judging by the video, the Chinese players appear have violated at least two of those rules.