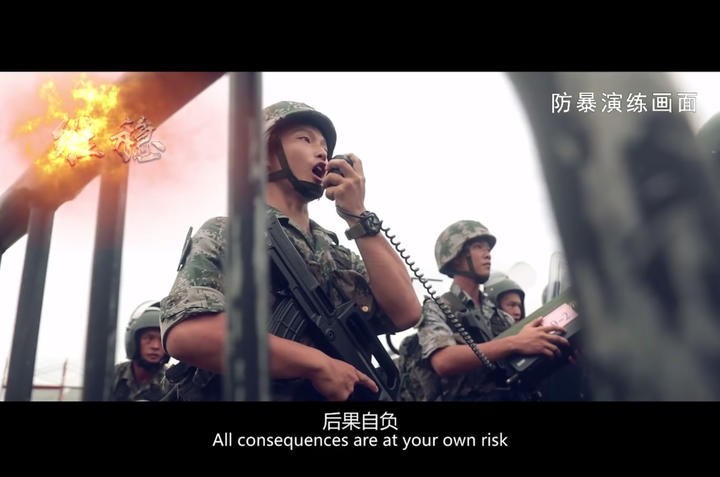 On Wednesday, the Hong Kong Garrison of the PLA released a video showing soldiers with heavy weaponry blasting targets to smithereens and troops in riot gear rounding up civilians like prisoners of war. Ominously, a PLA soldier can be heard shouting into a loudspeaker in Cantonese that "All consequences are at your own risk."

The video is a not-so-subtle hint that China is seriously considering sending in armed troops to crush the ongoing anti-extradition bill protests in Hong Kong. On July 24, Chinese Defense Ministry spokesman Wu Qian described the protestors' challenge to China's sovereignty over Hong Kong as "intolerable" and said that the PLA garrison could mobilize to restore pubic order if requested by the special administrative region's government.

An editorial published in the Financial Times on July 31 wrote that deploying the PLA to Hong Kong to put down protests would be a "massive error." That same day, news broke that China was massing troops on the border with Hong Kong and the White House responded that it was monitoring the situation.

On August 1, Taiwan's MOFA posted a tweet criticizing Beijing for celebrating Armed Forces day in "a most uncivilized fashion." It sarcastically wrote that the people of Hong Kong were "gifted a video of vile threats!"

MOFA pointed out that the so-called "People's Liberation Army" is meant to protect the people, and "not pound them into submission." MOFA closed the tweet by saying, "It's time for authoritarian China to back off!"

Beijing is celebrating Armed Forces Day in a most uncivilized fashion. The people of #HongKong are gifted a video of vile threats! The PLA is supposed to protect the people, not pound them into submission. It's time for authoritarian China to back off! JW https://t.co/L2q4PCblSd pic.twitter.com/PJ0nqG3xLJ