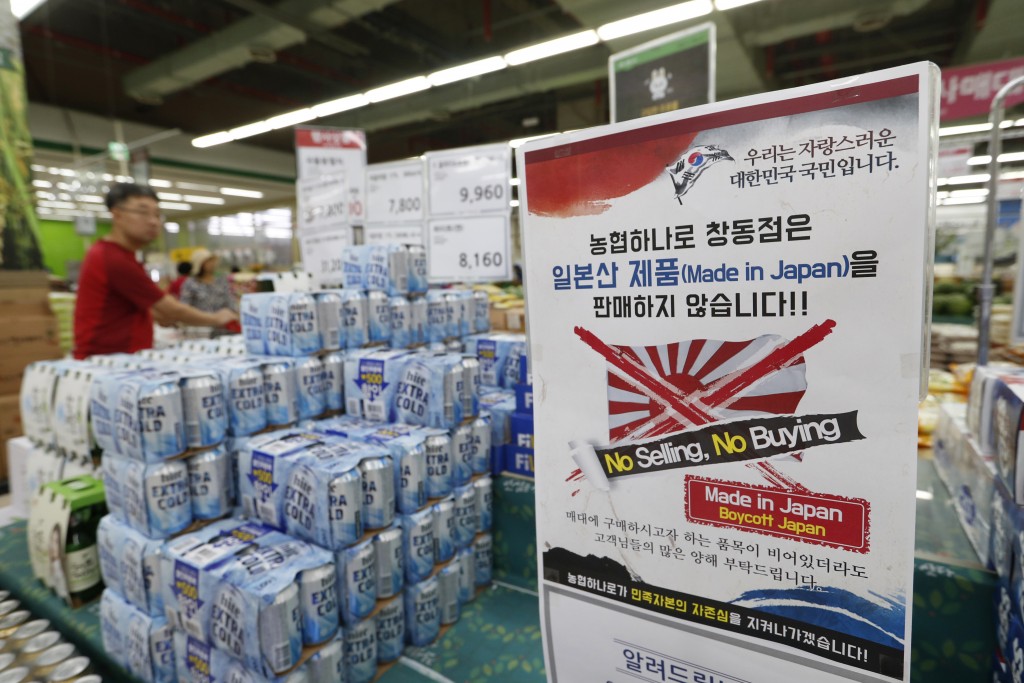 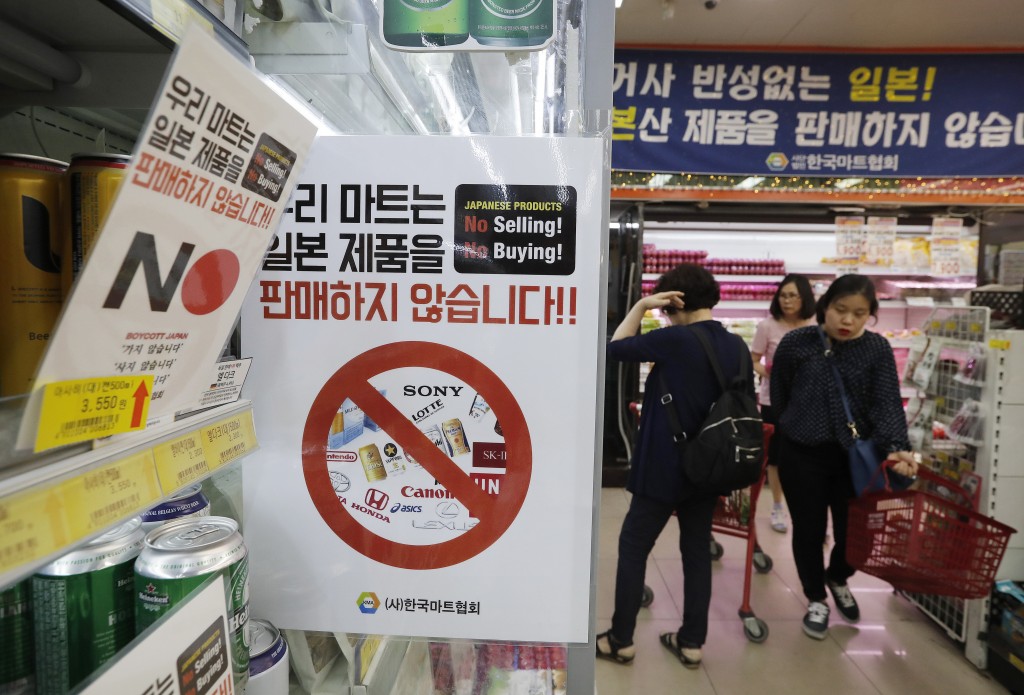 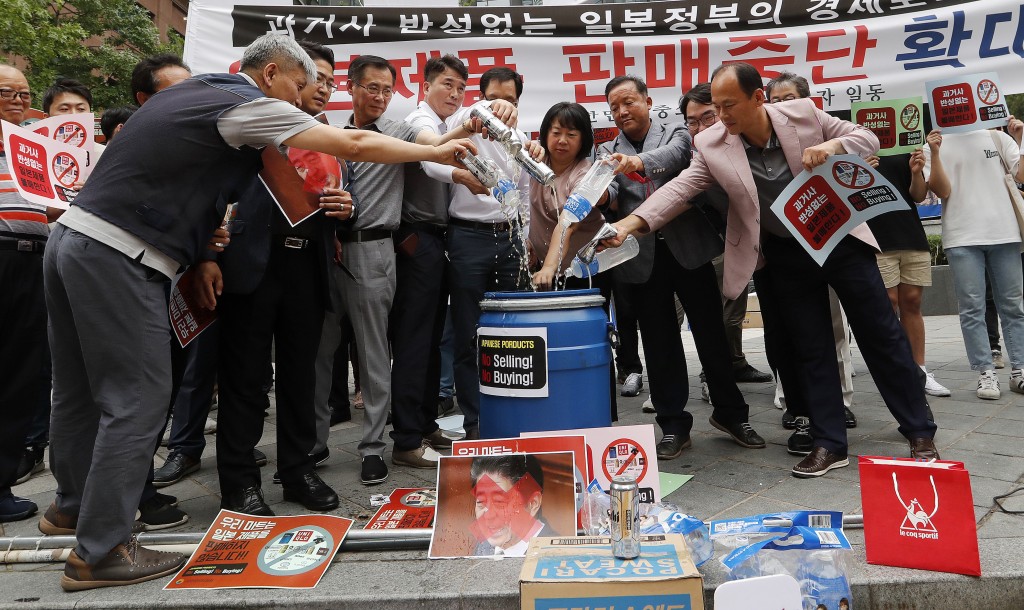 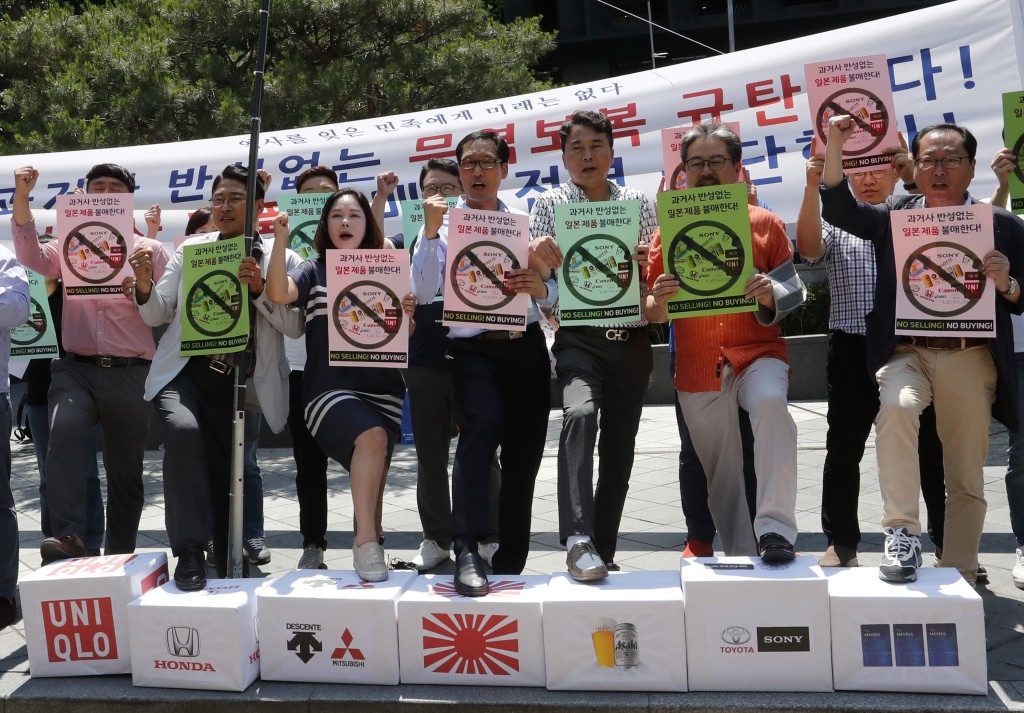 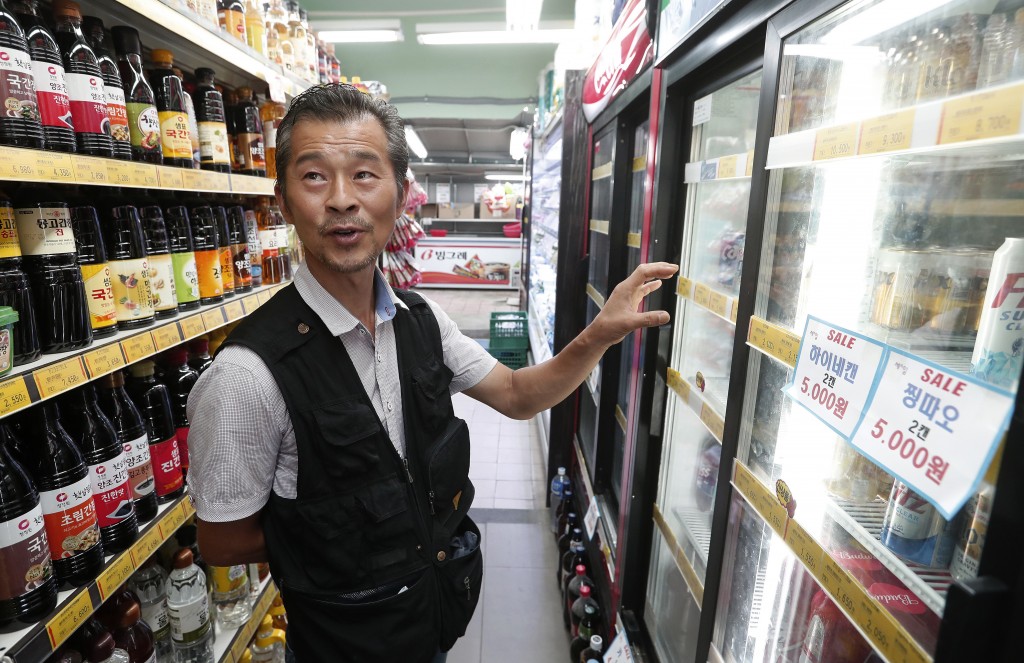 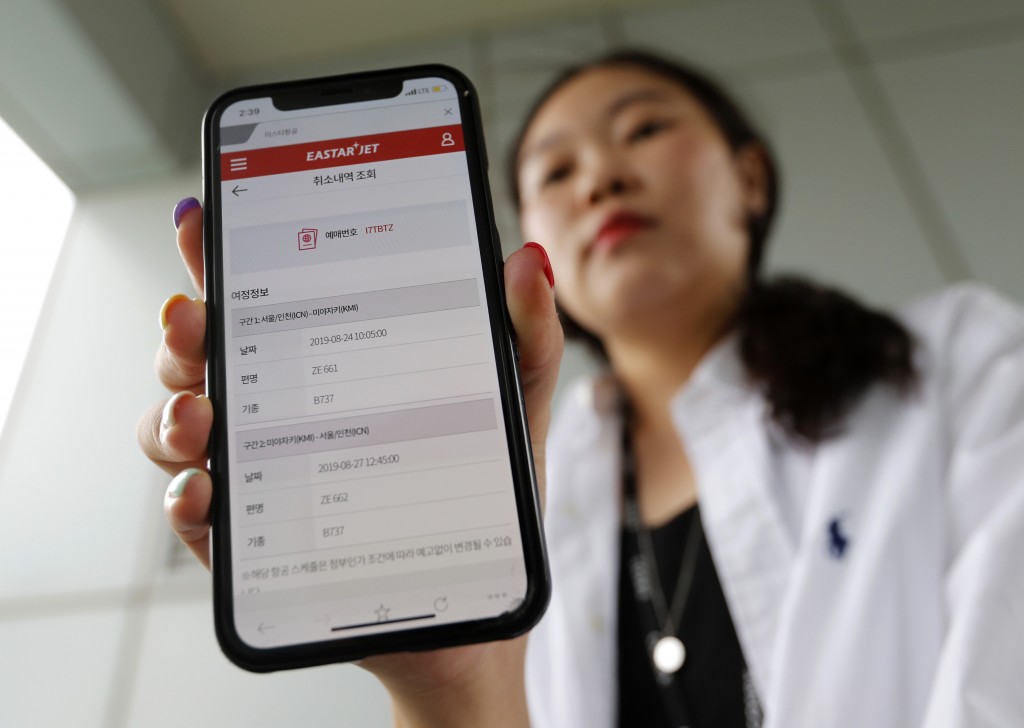 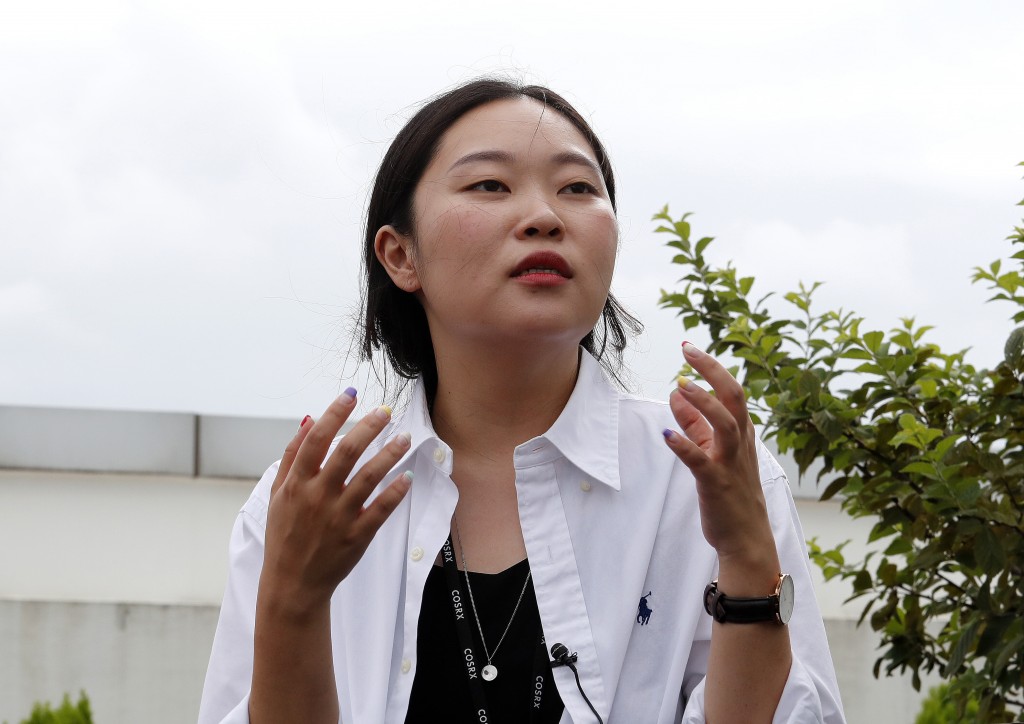 BUNDANG, South Korea (AP) — When Lee Kyung Eon and her friend recently scrapped their plans to go to Japan for their summer vacation and paid $135 penalty for canceling plane tickets, they joined a growing public campaign in South Korea to boycott Japanese goods and services.

"We intended to do something that is unhelpful to Japan even a little bit," Lee, a 26-year-old office worker in Bundang city, just south of Seoul, said. "Many people told us we did something really good ... but some with strong patriotic spirits said we shouldn't boast of things that we have to do."

A widespread anti-Japanese boycott has gained ground in South Korea since Tokyo on July 1 tightened its control of exports of three chemicals used to manufacture semiconductors and display screens — key export items for South Korea. The boycott could worsen as Japan is expected to expand its export curbs to other materials as early as Friday by removing South Korea from a list of countries granted preferential trade status.

South Korea accuses Japan of retaliating over local court rulings last year that ordered two Japanese companies to pay compensation to former Korean employees for forced labor during Tokyo's 1910-45 colonization of the Korean Peninsula. Japan has denied that, saying its action was taken out of national security concerns.

Some question whether the boycott, mostly targeting consumer goods, can really hurt the Japanese economy as a majority of Japanese imports are parts and materials used in TVs and smartphones that South Korea exports. They worry the boycott could only aggravate the animosities as it may trigger a backlash from Japan.

But others say the campaign exposes the bitter resentments many South Koreans still harbor against their former colonial master. A recent survey suggested 80% of South Koreans are reluctant to buy Japanese products.

Angry South Koreans have taken to Instagram and other social media, posting videos on their canceled Japan-bound plane tickets, sharing information on which Japanese companies operate in South Korea and expressing their support for the boycott.

There have been some consequences.

HanaTour, the largest travel company in South Korea, said a daily number of reservations for Japan trips has dropped to about 400-500 from 1,000-1,200 late last month. Other tour agencies have reported similar or lower booking figures for Japan tours.

Last year, about 7.5 million South Koreans visited Japan, making it the most popular destination. The state-run Korea Tourism Organization said it has no data on how many South Koreans traveled to Japan this month.

Customs officials said the imports of Japanese cars from July 1-20 was estimated at about $46 million — a 32% decrease from the same period last year. Fast Retailing Co., which operates Uniqlo, was forced to apologize last week after inviting criticism in South Korea over the remarks by one of its executives that the boycott won't last long.

One of the store's regulars, Chon Jong Lee, supported Dan's action. "I think I originally have stronger anti-Japanese sentiments than other people. I have really a bad feeling toward them," Chon said.

"The boycott isn't helpful in resolving the conflicts, though some may feel cool by venting their anger at (Japanese companies)," said analyst Lee Sangho at the Seoul-based private Korea Economic Research Institute. "If public sentiments (in both countries) get worse, we may see a situation that spirals out of control."

There have been anti-Japanese rallies in South Korea over the Japanese trade curbs, but none has yet turned violent. Two men in their 70s have set themselves on fire in an apparent protest against Japan. One died and the other, who set himself ablaze on Thursday, remained in critical condition.

Lee Myon-woo at the private Sejong Institute near Seoul said the boycott will likely have a limited effect on the Japanese economy. He also said that the lower number of South Korean tourists to Japan will likely be compensated by Chinese and other foreign visitors.

Some worry the boycott will eventually undermine the South Korean economy because a withdrawal of Japanese companies would lead to their South Korean employees losing their jobs, while a fewer number of tourists would incur losses for South Korean tour agencies.

Ahn Kyung-su, a researcher in Seoul who plans to visit Tokyo this weekend for his summer vacation, called the boycott "anachronistic" and illogical. "Our TV stations mostly use Japanese-made cameras. So do we have to stop watching their programs?" Ahn asked.

At Shin-Okubo, a major Korea Town in downtown Tokyo, business was as usual this week, with many Japanese looking for K-pop music, Korean food, cosmetics and other merchandise.

Misaki Toguchi, a 14-year-old junior high school student from Saitama, north of Tokyo, said her devotion to BTS and K-pop is unshakable despite the news of the disputes. "There is absolutely no change, I still really like Korea," Toguchi said.

"These (disputes) are something that only top officials in the government are doing. I don't think there is any impact on ordinary people like us," said Keiko Katsumata, a part-time worker who was in Korea Town with her friend.

The two countries are closely linked to each other culturally. Many South Koreans like dining at Japanese restaurants, watching Japanese animation films and travelling to small towns in Japan.

Speaking before a large placard hung at his Heemang store that partly reads "We are not selling Japanese products," Dan said his family canceled their plans to go to Mount Fuji for holidays this summer. "In fact, Japan has been a country that I've wished to go," he said.

Lee Kyung Eon, who decided to go to Taiwan with her friend in August instead of Miyhazaki, Japan, said she also used to enjoying Asahi beer, sushi, soba and other Japanese foods. She said she had already visited Japan twice.

She admitted there have been ups and downs in her feelings toward Japan, saying she had a good impression following her trips to Osaka and Fukuoka before anti-Japan sentiments resurfaced in her mind when the two countries fought over history.

"The level of my hatred against Japan is now at one of the worst points in my life," Lee said.