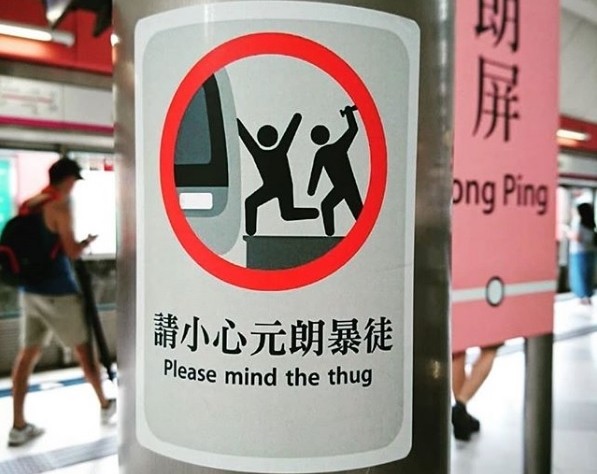 On July 21, a mob of over 100 men wearing white T-shirts and brandishing blunt weapons indiscriminately assaulted passengers in Hong Kong's Yuen Long MTR Station. Many of the men are suspected of being triad members in collusion with the police, who were conveniently absent from the scene for long stretches of time during the mob's attack.

Protestors who have been demonstrating for the past two months against the controversial extradition bill suspect that the thugs may have been dispatched by Beijing, if not local pro-China politicians such as Junius Ho, to crush the protest movement. Out of defiance, signs started appearing in the Hong Kong MTR on July 22 which read, "Please mind the thugs"

On July 28, this photo of one of these signs was posted on the Instagram page @hkstreetart, where it received 319 likes. It was then in turn uploaded to the social media site Reddit on July 29, where it gained 495 upvotes. Other images similar signs made in response to the Yuen Long MTR attacks soon appeared as well: