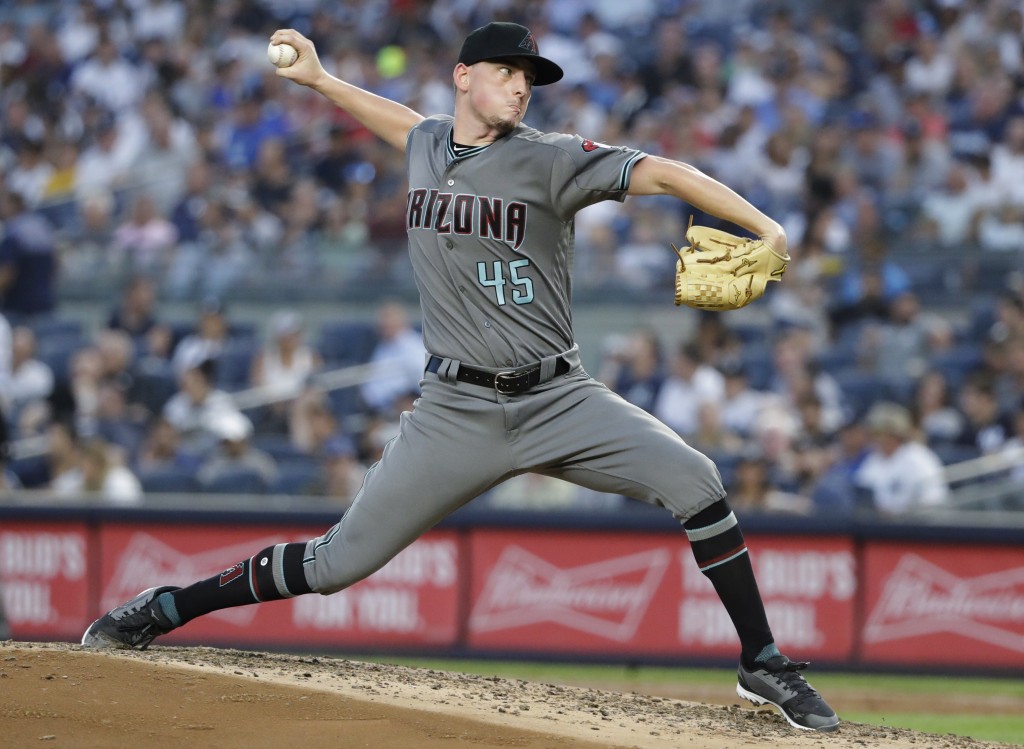 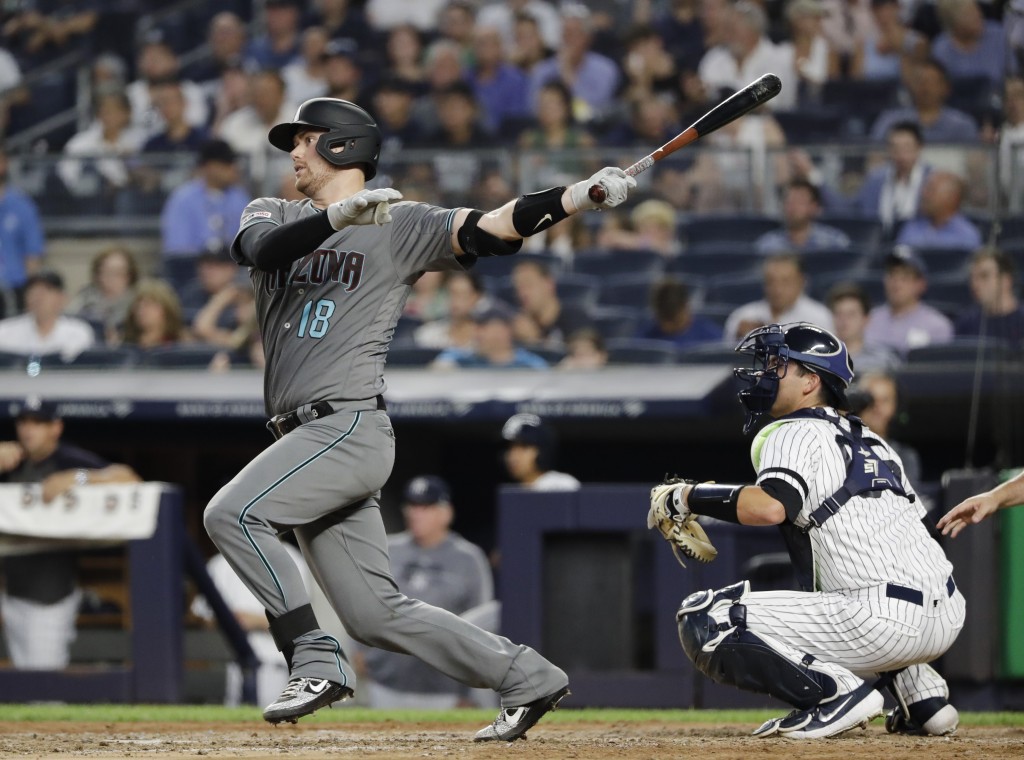 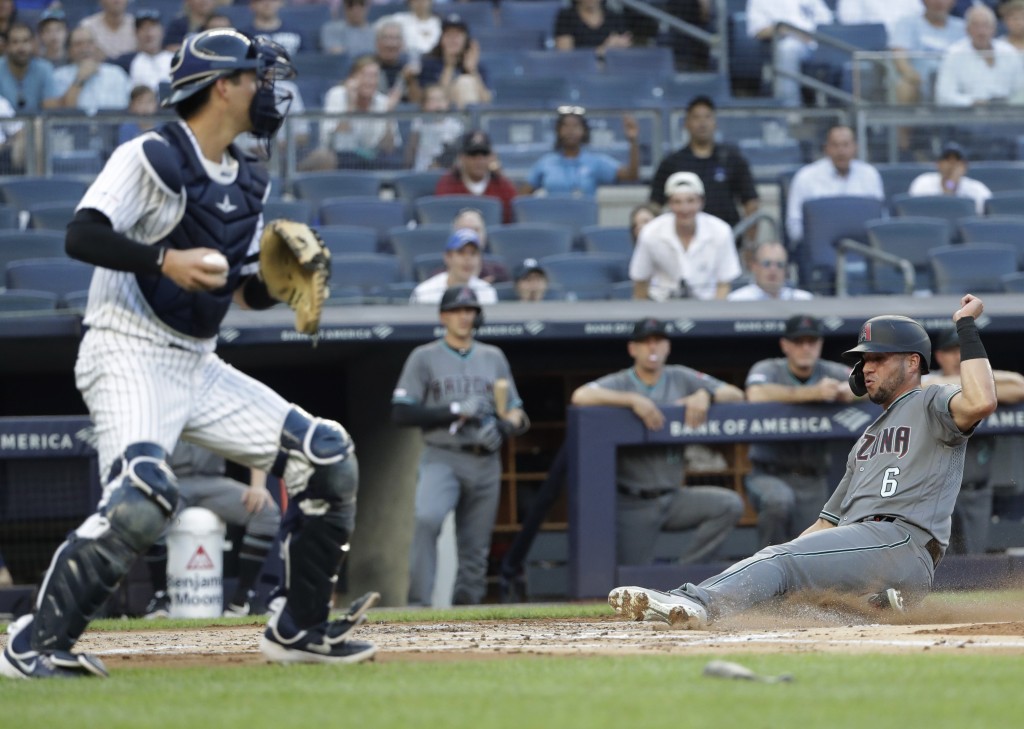 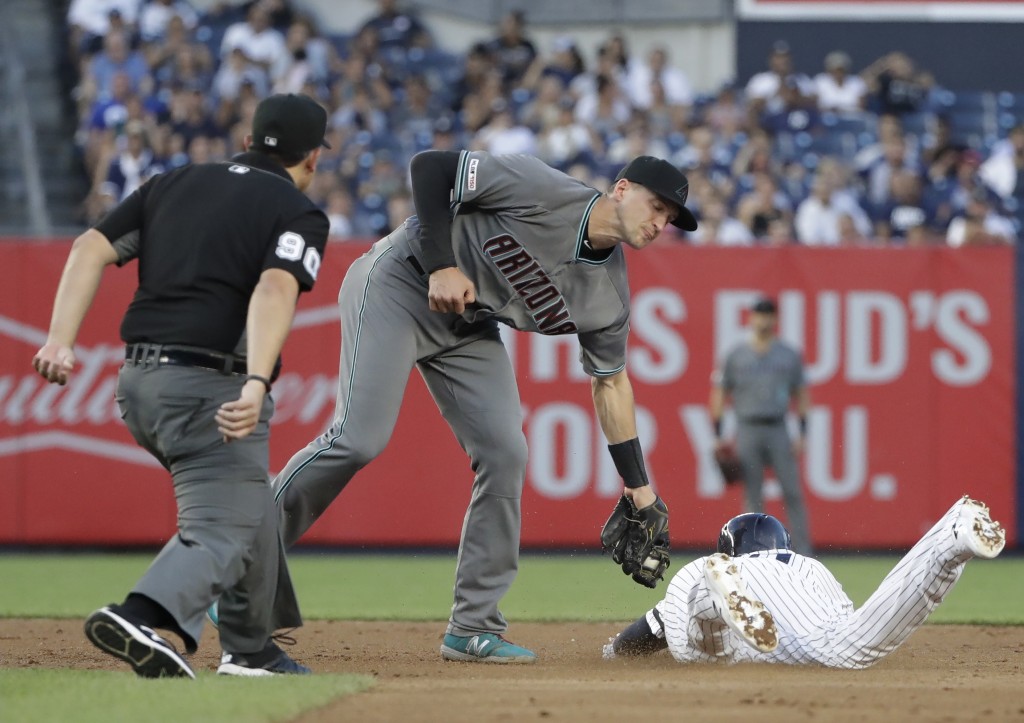 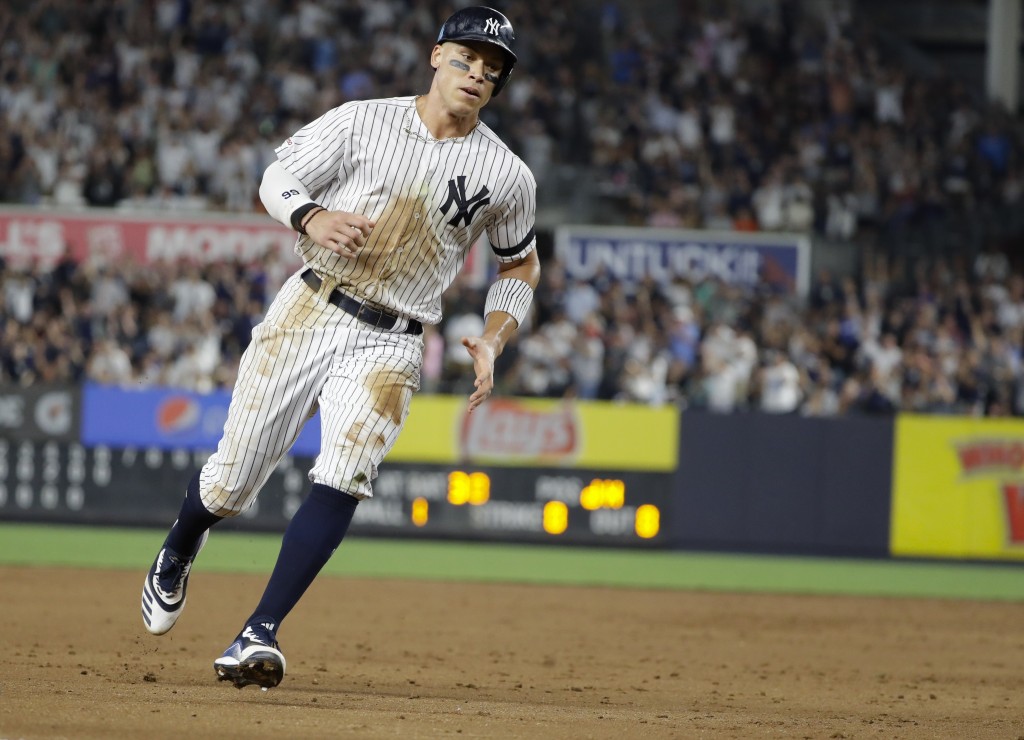 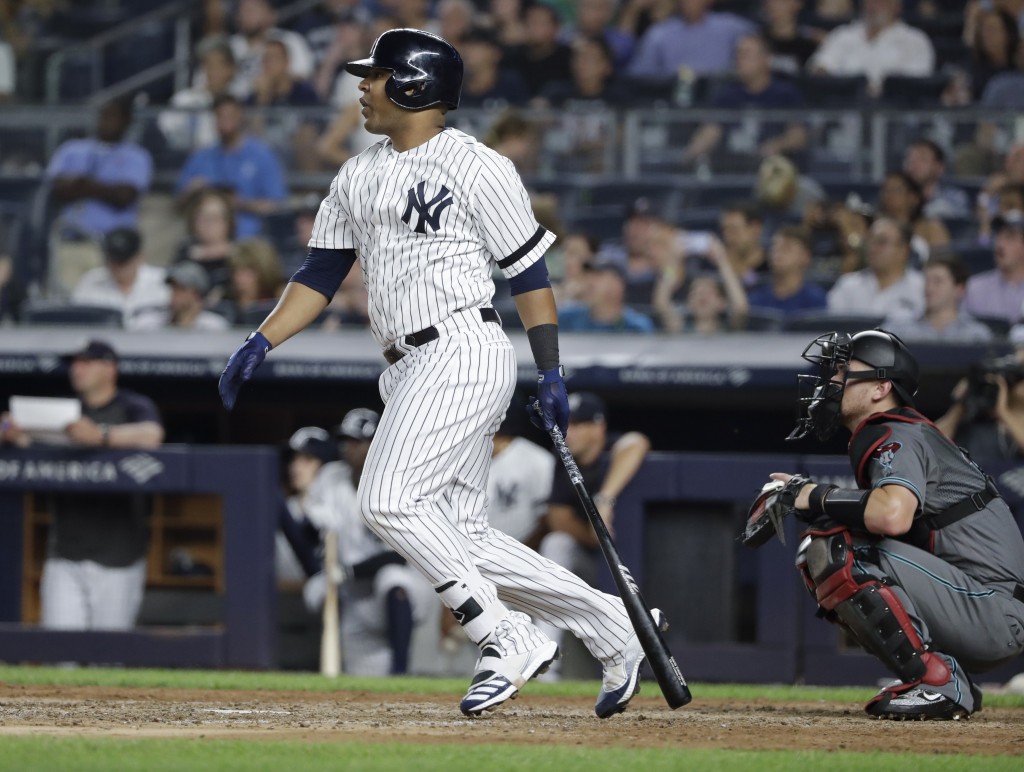 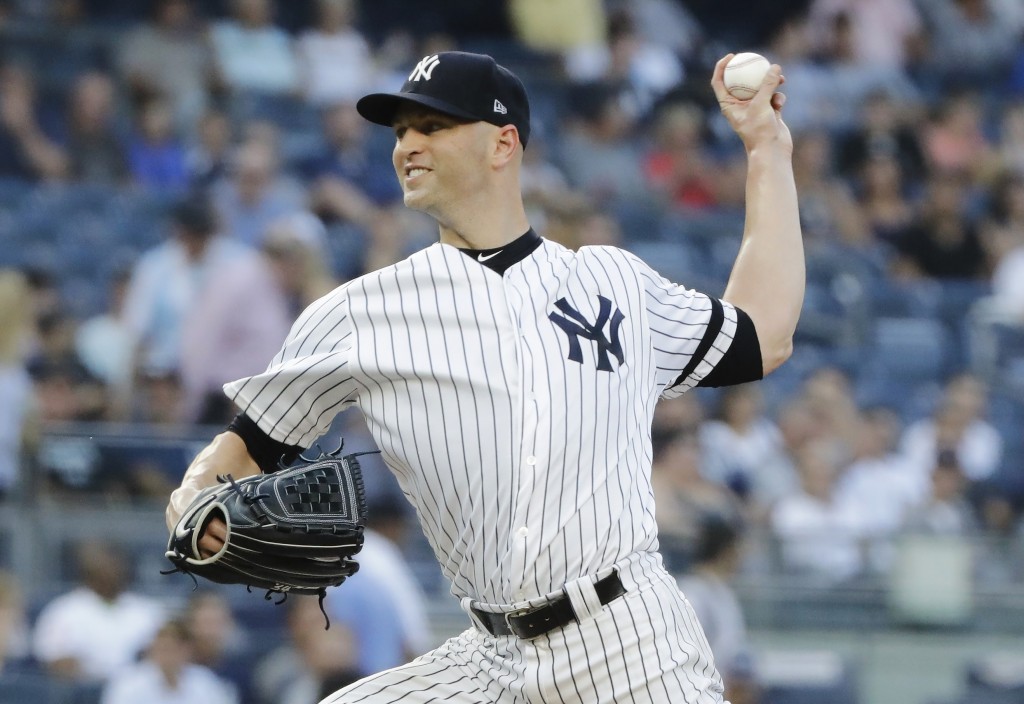 NEW YORK (AP) — Diamondbacks rookie Taylor Clarke was an impressive winner in his Yankee Stadium debut, five days after the birth of his daughter, and Arizona got home runs from Christian Walker and Carson Kelly to beat New York 4-2 on Tuesday night.

Nick Ahmed hit an RBI single and Adam Jones had an early sacrifice fly for the Diamondbacks (54-54), who have won all three meetings with the AL East-leading Yankees this year. Arizona, now 14-5 in interleague games after winning nine of its past 10, will go for a season sweep Wednesday afternoon in another rematch of the thrilling 2001 World Series won by the Diamondbacks in seven games.

J.A. Happ (8-6) allowed three runs in six innings for a struggling New York staff that gave up 79 runs over the previous eight games. General manager Brian Cashman is shopping for pitching help ahead of Wednesday's trade deadline — but time is running out.

"We know we're capable of something really special with all the guys we have in that room right now," manager Aaron Boone said. "Whatever happens or does or doesn't happen over the next 24 hours, I don't expect our room to change from a confidence standpoint."

Back from a rugged 3-4 road trip against fellow American League contenders, the Yankees have dropped six of nine following a five-game winning streak. They lost consecutive home games for the first time since dropping three straight in April.

They did, at least, prevent their opponent from scoring at least six runs for the first time in nine games. But this time, it was the lineup that struggled in front of a season-high sellout crowd of 47,281 at Yankee Stadium.

Clarke (4-3) did not permit an earned run over 5 1/3 innings of three-hit ball in his 12th big league start. The 26-year-old right-hander, who made his major league debut in April, struck out six and walked two to win his third decision in a row.

Archie Bradley got four straight outs for his fifth career save and first since June 18 last year.

Diamondbacks: LF David Peralta was in the lineup after getting hit on the right foot with a 90 mph slider in the ninth inning Monday night at Miami. "He's fine," manager Torey Lovullo said. ... OF-C Blake Swihart (strained right oblique) was set to play the outfield in his latest rehab game with Triple-A Reno. ... RHP Matt Andriese (bruised left foot) felt good after a second bullpen, Lovullo said. Andriese has been on the 10-day injured list since July 20. ... RHP Luke Weaver (forearm tightness) and RHP Taijuan Walker (Tommy John surgery) are throwing as part of their rehab programs. Weaver will have an MRI before getting back on a mound, Lovullo said.

Yankees: Voit exited with a core muscle injury and was scheduled for an MRI. He was replaced in the cleanup spot by the light-hitting Wade, who entered at third base as Gio Urshela shifted to first. ... All-Star INF DJ LeMahieu, who began the day leading the AL in batting, ran well in the afternoon but was held out for a third straight game as he nurses a sore groin. "Just trying to be smart with it," Boone said. ... OF Brett Gardner (left knee) is on track to return from the injured list this weekend against Boston. ... CC Sabathia was scheduled to see a doctor and receive an injection for inflammation in his right knee. ... RHP Luis Severino (rotator cuff inflammation) is getting close to throwing off a mound. ... OF-DH Giancarlo Stanton is making slow progress trying to building up strength in his quadriceps as he recovers from a sprained right knee. ... All-Star C Gary Sánchez (left groin strain) ran and hit indoors. Sánchez is eligible to come off the injured list Saturday but that's not likely. ... RHP Jonathan Loaisiga (strained right shoulder) struck out three in two innings of one-hit ball for Double-A Trenton.