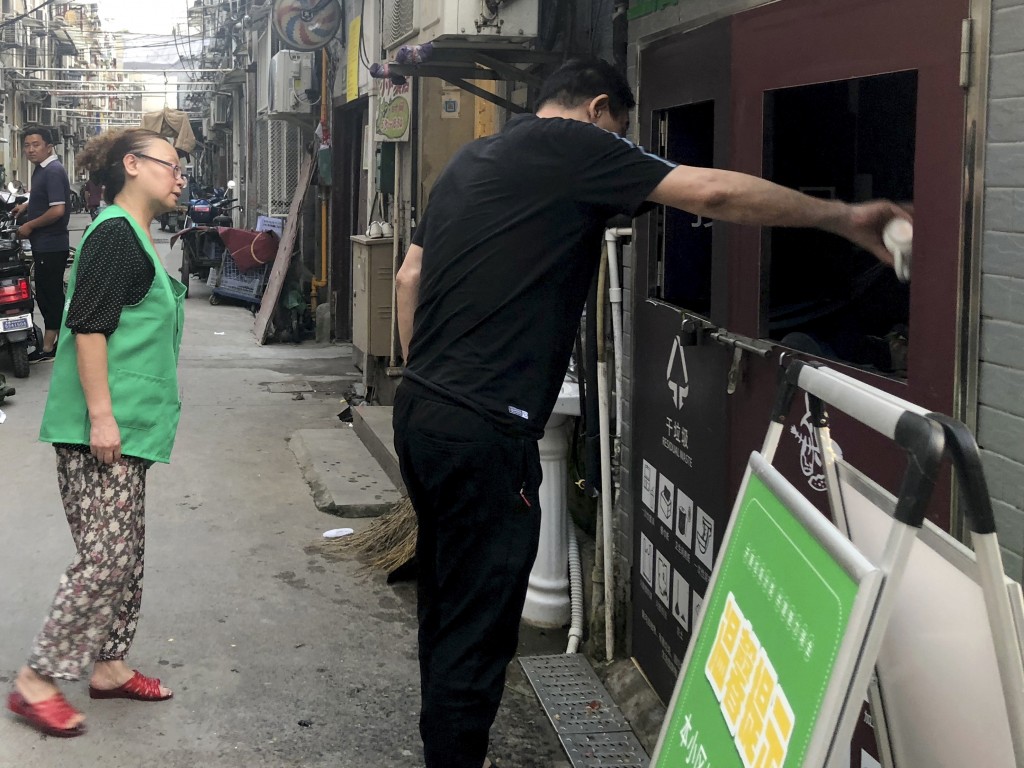 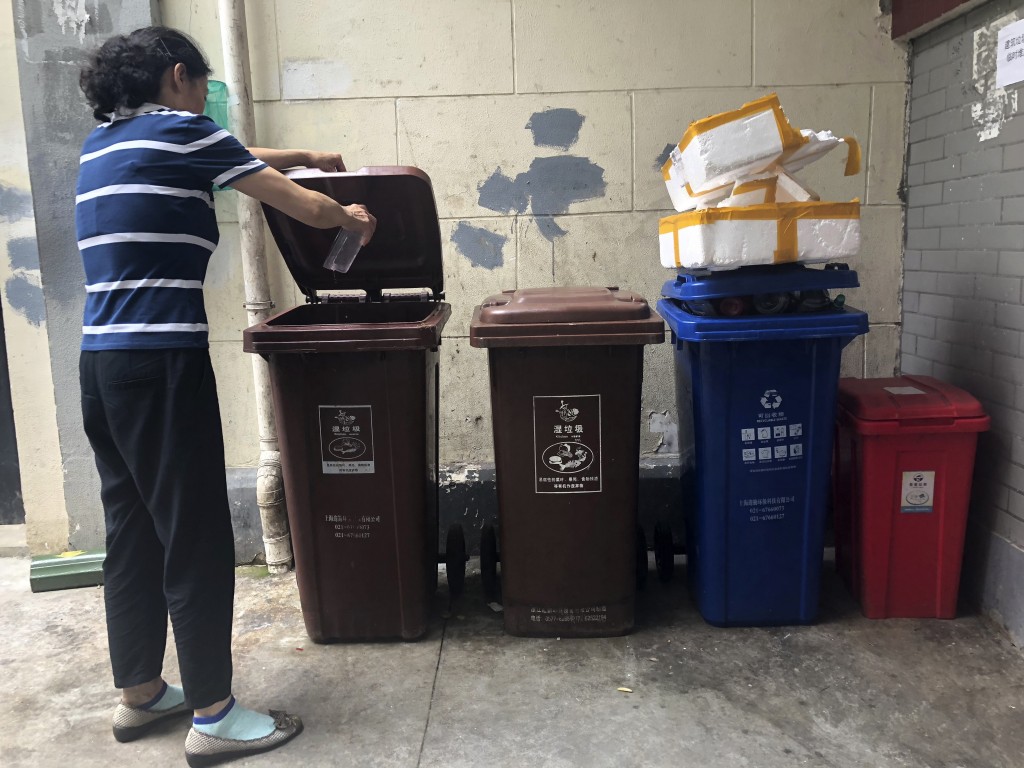 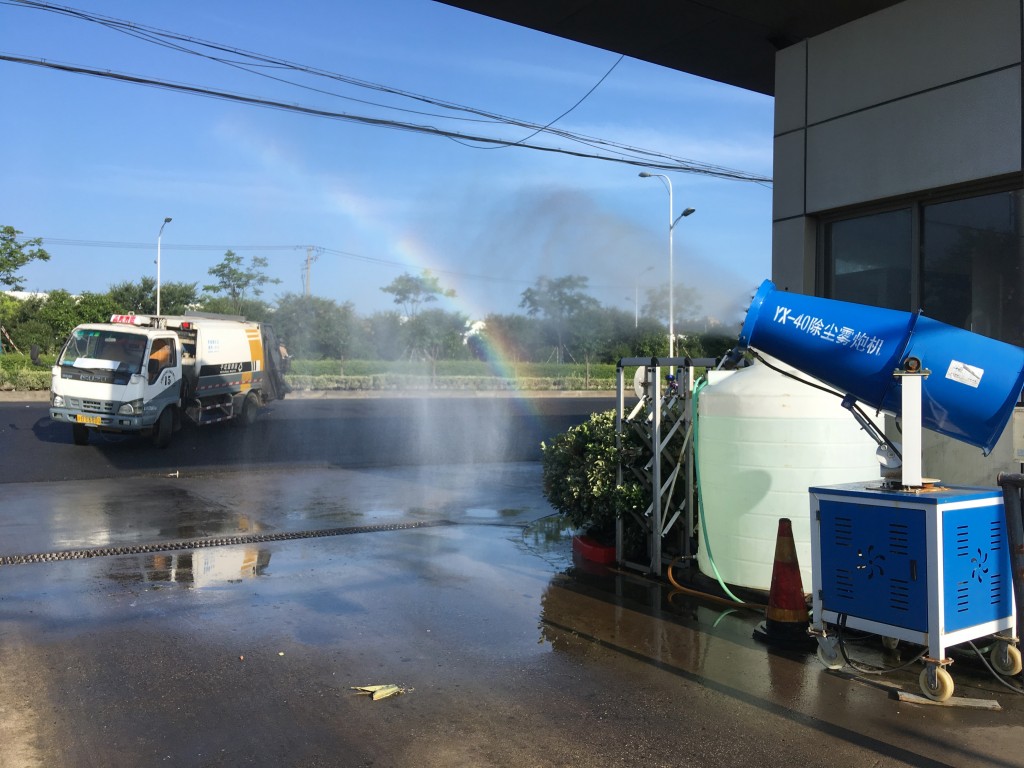 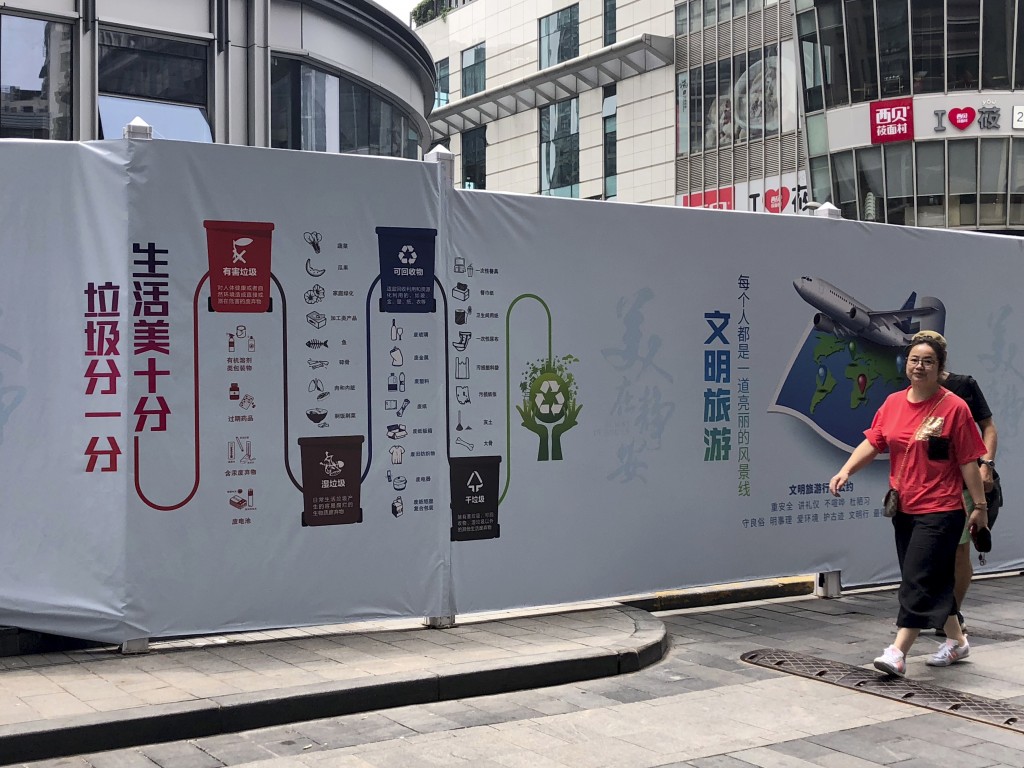 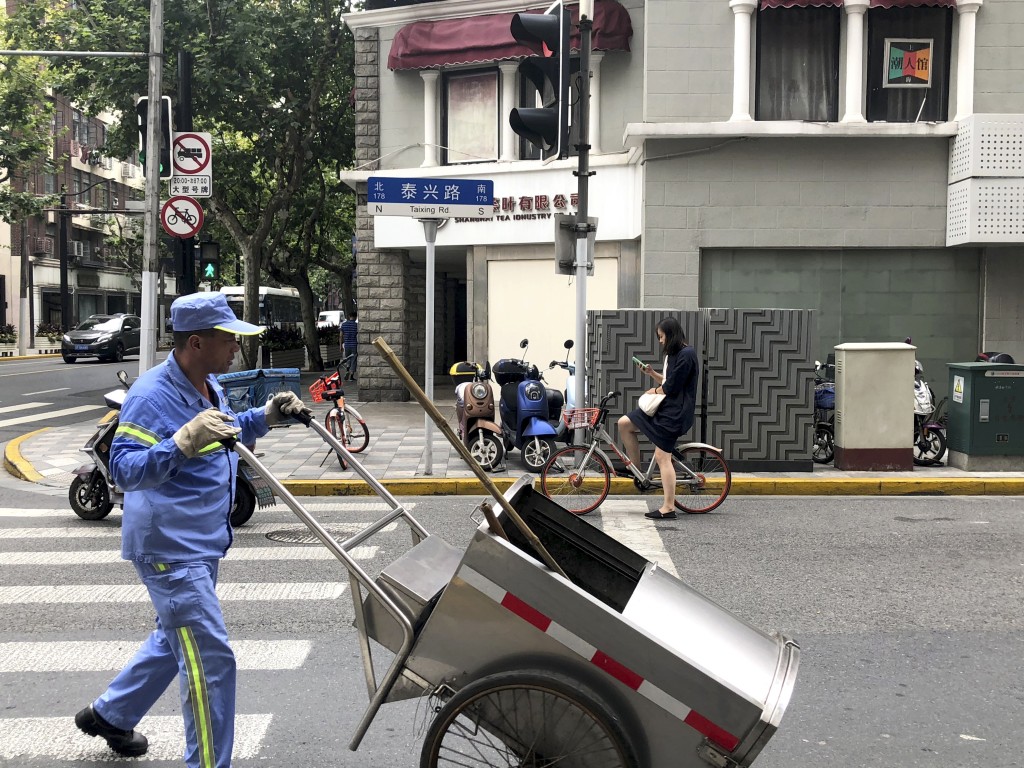 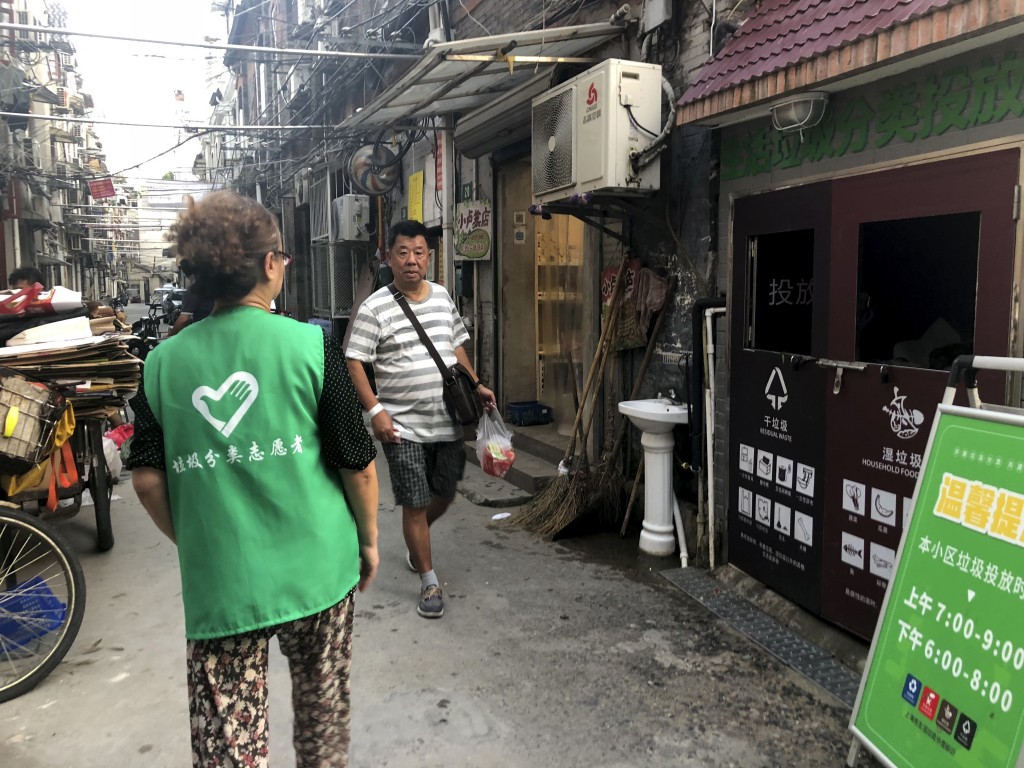 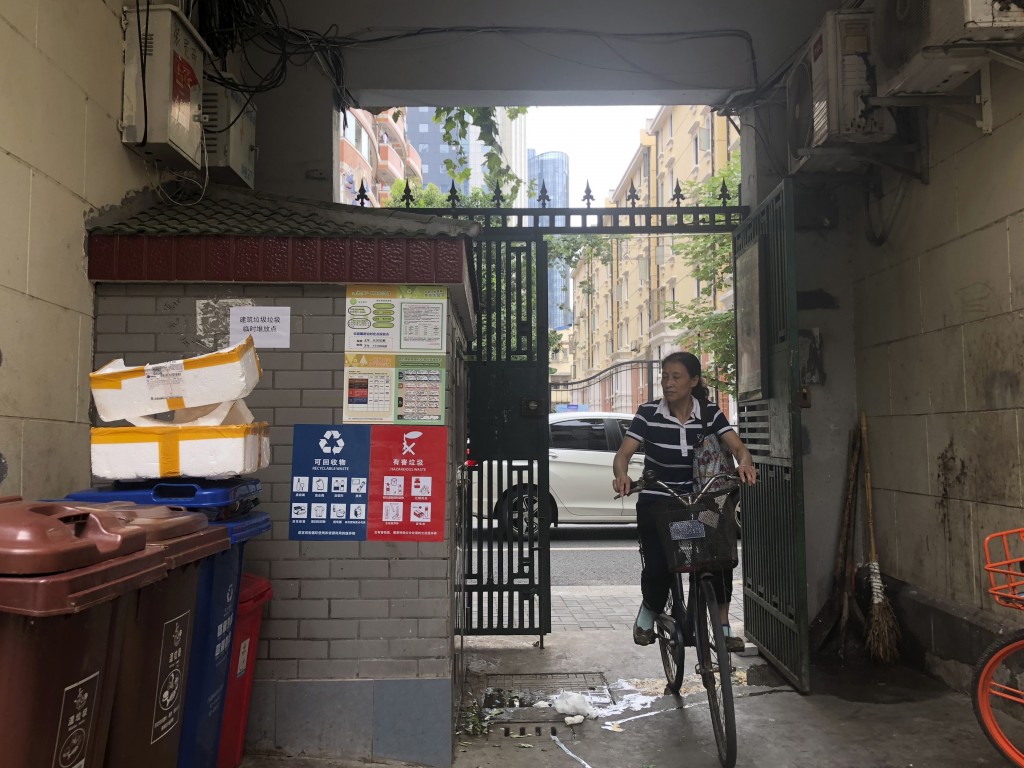 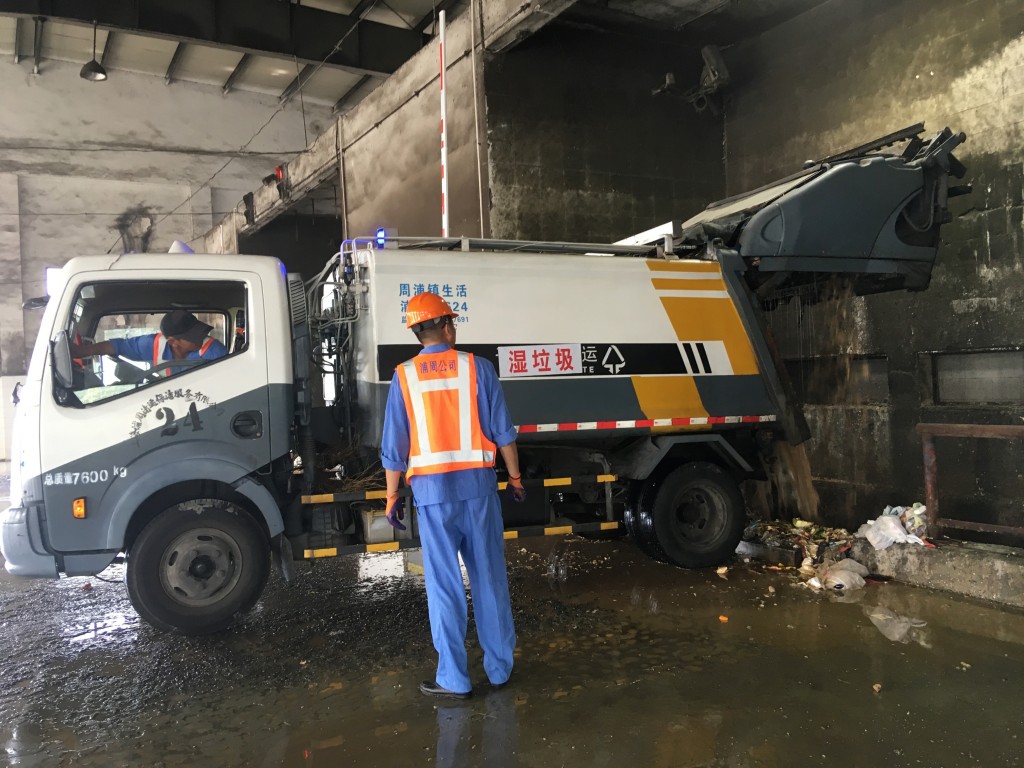 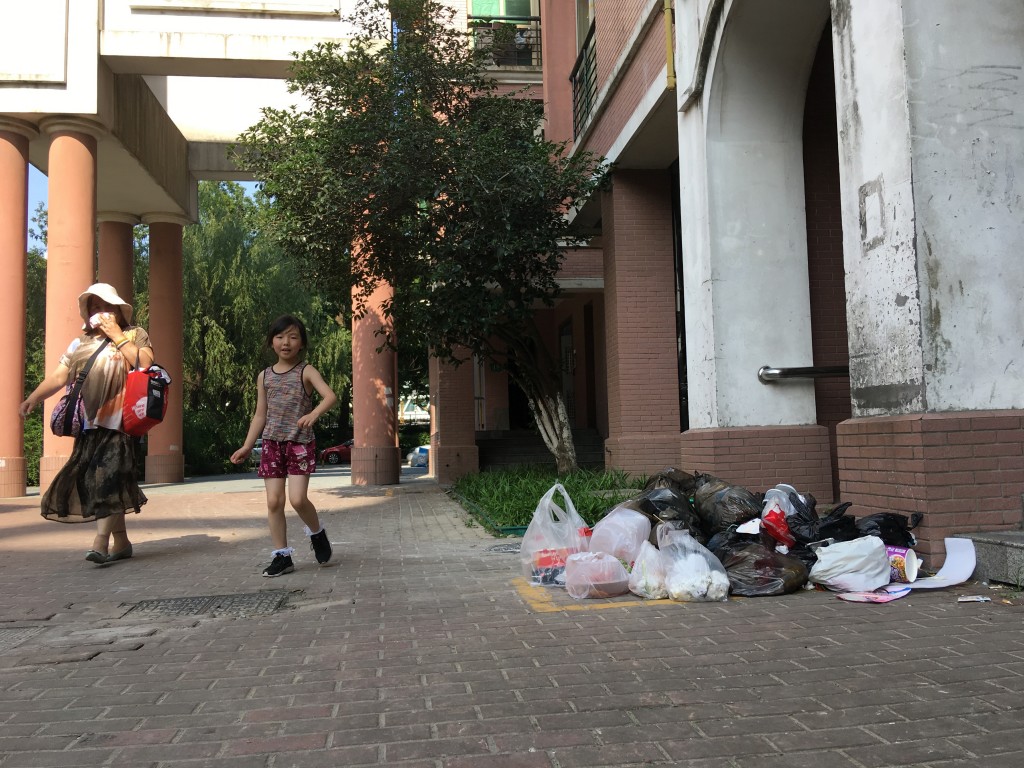 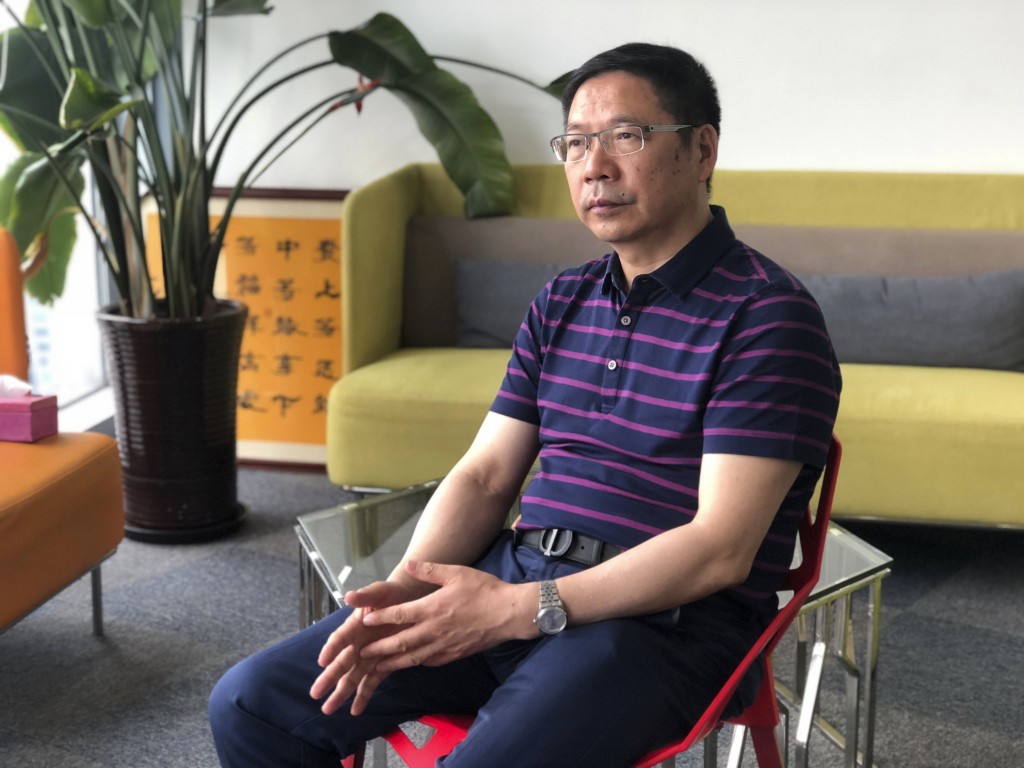 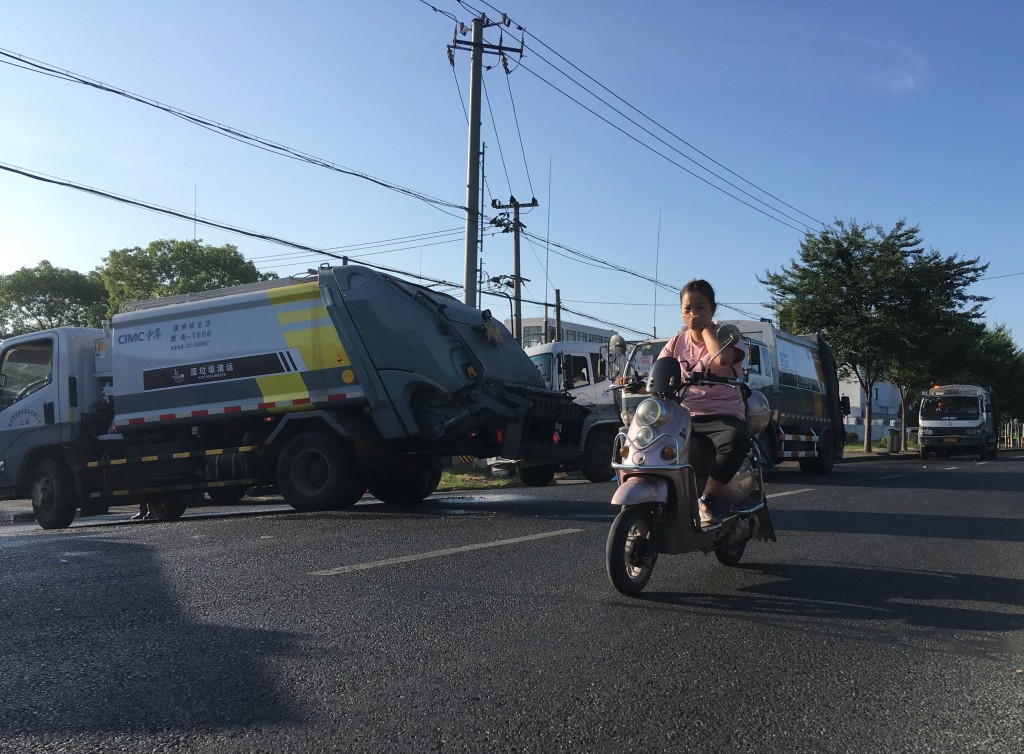 SHANGHAI (AP) — China's biggest city has dived headfirst into a trash sorting program that marks the country's first serious attempt at cutting the amount of garbage headed for landfills nationwide.

But despite a sweeping education campaign by the ruling Communist Party and the threat of fines, Shanghai residents still have a ways to go in changing their lifestyles and getting with the program— one properly disposed chicken bone at a time.

Months ahead of the campaign's launch in July, the government began its push to explain to Shanghai's young and old how garbage will need to be sorted into four categories: wet, dry, recyclable and hazardous.

From choreographed dances with trash bins to fliers sent to 6.8 million families and a scorecard for participating neighborhoods, efforts to roll out the system en masse have reflected the Communist Party's all-encompassing approach to rules enforcement.

There's lot of garbage to get through. About 9 million tons of household trash to be exact, according to 2017 data from Shanghai's Statistics Bureau. The government hopes the new sorting measures will reduce the amount of waste headed for landfills by making it easier to recycle or compost some of the trash.

"It is going to take a generation to really accomplish it," said Du Huanzheng, a self-described "trash professor."

"It is a change of habits," said Du, a professor at Tongji University in Shanghai who has served as an adviser for the new program. Quoting a Chinese proverb, he said: "It's easier to change the rivers and mountains than a person's nature."

On a recent day in downtown Shanghai, 67-year-old Zhang Guihua stood in front of an apartment complex's trash disposal area with bins for the four new trash categories.

Zhang, who works as a caregiver in the complex, said the rules have no doubt made taking out the trash more time-consuming. For instance, while the elderly woman she works for generally only has one bag of garbage to throw out at a time, Zhang now has to pick out the trash by hand before sorting it into the different bins.

"It is troublesome," Zhang said. "My hands get dirty after dealing with it and there's no place for me to wash my hands."

Online commentators have pointed out that distinguishing one type of waste from another is no easy task. While chicken bones are officially classified as wet, pork bones are considered dry. Dry mushrooms are in fact wet, and wet tissues are actually dry.

One strategy for identification that has been spreading online is to think of the trash in terms of pigs: Trash is wet if pigs can eat it, and dry if not; trash is hazardous if it can kill pigs, but recyclable if it can be sold to earn cash to buy more pigs.

To help children remember the rules — and pass them on to their families — Chinese e-commerce platforms are selling "trash classification toys" with miniature garbage bins and flash cards, and teachers have assigned trash-related homework.

As President Xi Jinping said during a visit to Shanghai last November, according to the Xinhua state news agency, trash classification is the "new fashion."

The sorting campaign has dominated headlines on Shanghai media, and fliers have been sent to every family. In a performance held by district-level authorities, eight jean shorts-clad girls danced energetically on a stage beside four large trash bins, to a song which declared "I have no rival in trash sorting!"

"The Chinese government has a strong ability to act," Du said of the program's strong enforcement. "Its ability to concentrate on doing big things is stronger than in Western countries."

Neighborhoods and districts in the city are also now being graded for their trash sorting ability on a scale from "excellent" to "bad." Individuals who have excelled in trash sorting are rewarded with points that can be redeemed for household items like detergent and umbrellas.

There are sticks together with the carrots. Shanghai Urban Management and Law Enforcement Bureau said 607 fines ranging from 50-200 yuan ($7-$29) were issued in the first 20 days of the program.

Even when residents have got it all figured out, however, the proper equipment is not always fully in place.

Tang Guiqin, a 70-year-old retiree, said it was both natural and convenient for her and her family to learn the new rules. But when she went to throw a glass bottle, she discovered that her neighborhood was lacking bins for both hazardous and recyclable materials.

"There's no trash can for it here," Tang said with a laugh. "I have no choice but to throw it into the dry trash can."

Putting the new measures into force has required the whole community to adapt. Neighborhood volunteers — everyone from housewives to retirees to independent waste pickers — have donned green vests to stand watch beside trash cans and make sure residents are getting with the program.

Zhu Xiaohua, a retiree, said she volunteers three days a week, from 6 p.m. to 8 p.m. In the beginning, it took some getting used to, Zhu said, but most of her neighbors now follow the rules.

"I personally think there won't be any need to monitor after a while," said Zhu, who wore a green vest with the words "Trash Sorting Volunteer."

Despite these efforts, not everyone does exactly as they're told.

In a neighborhood in Shanghai's Pudong New Area, workers from the apartment complex's management office must go through the trash every day to rearrange the items that residents did not care to sort. The employees open up the bags and pull the dregs out with their bare hands, separating the bubble tea, watermelon slices and expired tofu.

With the first month of the program just ending, no official figures are available yet on how it is doing.

In some cases, residents are being encouraged to apply the classification system to other parts of their lives.

Chinese e-commerce giant Alibaba has launched a smartphone app to help users identify the right categories for specific items. Users can type or take photos of items they're throwing out, and the program will tell them which of the four categories it belongs to — even for nonmaterial forms of "trash."

If you search the term "ex-boyfriend," for instance, the app will give you the following suggestion: "This may be hazardous. Recycling is not recommended if he is truly scum."