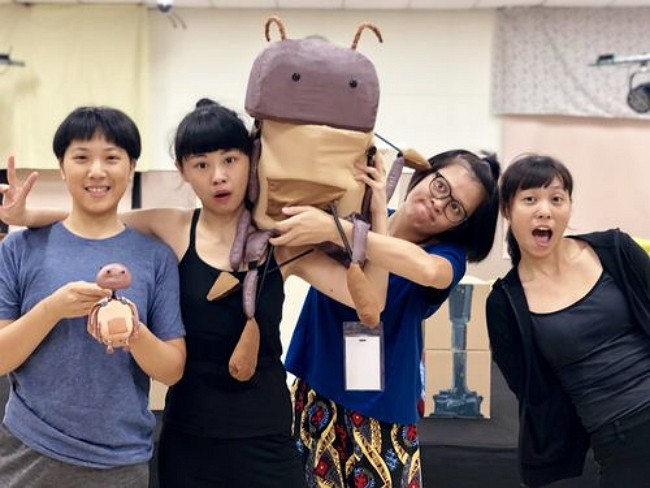 Taipei, July 30 (CNA) Performing arts troupe Team Furry Tails (軟綿尾巴組) is staging a children's puppet show at the six-week 2019 Taipei Children's Arts Festival (TCAF) from Tuesday based on the travels of a cockroach that explores the theme of immigration and its challenges.

The puppet show, called "A Cockroach and Furry Blurry Fluffy Things," opened that day with two performances and will be performed three times a day until Friday, Aug. 2 at Taipei's Bojia Sports Park.

The production, designed for two to eight year olds, premiered at the Edinburgh Fringe Festival last year, which according to the TCAF's website is focused on telling "stories on (of) animals in ways that are interesting, vibrant and full of imagination to children and adults alike."

Director Huang Yu-chia (黃昱嘉), who has studied in London since 2016, said the show is about a cockroach from Taiwan who has been mistakenly packed into a box that has been shipped to London, after which he has many adventures that are allusions to migrants and the experience of being in a foreign country.

"While I was in London, I really wanted to put on a puppet show to express my Taiwanese identity and my experiences such as discrimination as an immigrant (foreigner) so I thought of the cockroach, which is rampant in Taiwan. It is considered dirty and unwanted, similar to what I experienced," Huang said.

"Although they (locals) didn't really hate me, they really didn't care about me," she added.

After arriving in London, the cockroach had to adapt to new surroundings, was often subjected to isolation or harassment by local animals and couldn't really express itself until it made friends with a squirrel and decided to stay in the city, she said.

"Migrants want to express their feelings and concerns to locals but actually it is really hard," Huang said, adding that many people in the United Kingdom who watched the show described the performance as portraying bravery and friendship.

Prior to its performances for TCAF, a total of 25 performances were staged at the 2018 Edinburgh Fringe Festival, held in August last year, Huang said.

"In Edinburgh it was quite tough because we resorted to handing out flyers to get news of the performance out there, and in comparison to other performances which were more locally well known, parents didn't really bring their children to our shows because they didn't know what to expect," she said.

To that end, she wanted to take the opportunity to stage the show at the TCAF to see what the reception is like compared to performances in Edinburgh, Huang said.

The show opened to a full house of 80 people and thrilled children and parents with creative and lively puppetry of different animals, including a cat, dog, crow, squirrel, and a flock of pigeons.

Ho An-yun (何安妘), one of the three actresses on stage, said the liveliness of the puppets comes from the chemistry she has developed with the other performers.

"This way the puppets come to life and are not just props being used for the sake of being used," she said.

The 2019 TCAF, being held from June 29 to Aug. 4, is an annual six-week festival that takes place around July and includes live performances, exhibitions, and workshops. The family-friendly event is celebrating its 20th anniversary this year.