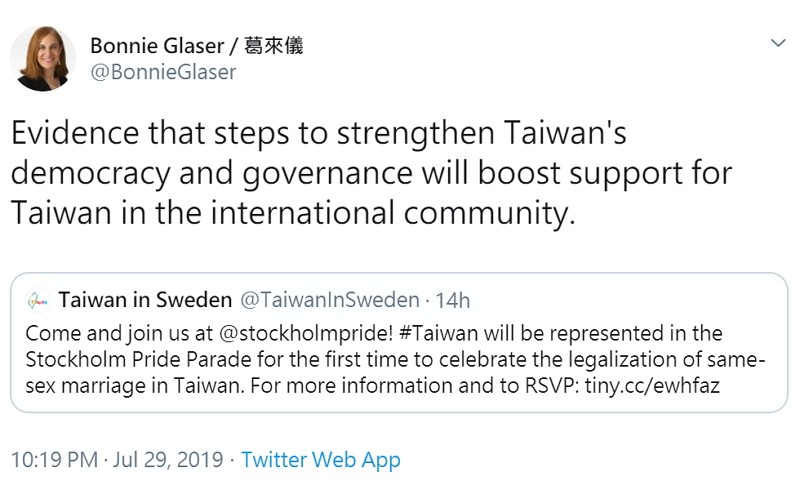 TAIPEI (Taiwan News) – Bonnie Glaser, a senior advisor on Asia at the Washington-based think tank Center for Strategic and International Studies (CSIS), has expressed her support for Taiwan’s democracy on social media.

In a re-tweet on Monday (July 29), Glaser shared information about an event posted by the Taiwan Mission in Sweden, which announced Taiwan will for the first time be represented at the Stockholm Pride Parade. The event will take place on Saturday (Aug. 3).

According to the de facto embassy, Taiwan’s participation in the event highlights its status as the first Asian country to legalize same-sex marriage, in May. Everyone is invited to join the Taiwan float at the annual parade and make the most of the “perfect opportunity to show Sweden and the world about Taiwan’s determination to uphold human rights and democracy.”

Glaser wrote in the re-tweet, “Evidence that steps to strengthen Taiwan's democracy and governance will boost support for Taiwan in the international community.” While Taiwan’s participation in the parade doesn’t suggest Swedish government support, as one netizen pointed out, Glaser said, “Participation in the international community doesn’t take place solely through governments.”

Glaser has previously voiced concerns about the military provocations that have resulted in heightened tensions between Taiwan and China. In a YouTube video, Glaser also cautions against China meddling in Taiwan’s politics and society.

“There is evidence of disinformation, of money being funneled from China, to various groups in Taiwan. And there’s interference in social media,” according to Glaser. 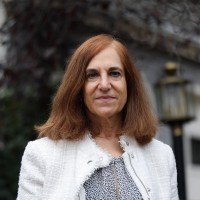 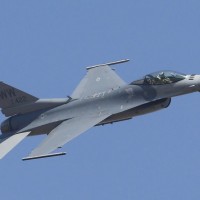