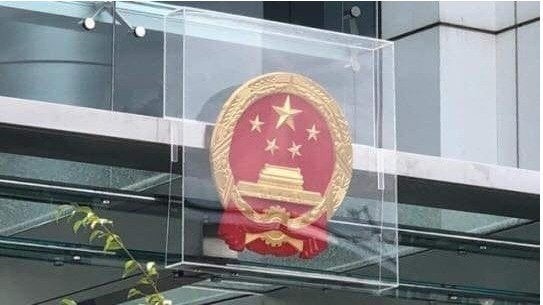 TAIPEI (Taiwan News) – Following the defacing of the Chinese national emblem outside China’s Liaison Office in Hong Kong last week, the Chinese government responded by encasing the emblem in what appears to be plexiglass.

While a seemingly minor precaution to prevent future instances of vandalism, the symbolic and possibly unintentional message behind the action is one of insecurity and defensive planning. Rather than projecting an image of pride and confidence in Hong Kong, the new protective casing of the national emblem reflects an image of something fragile that must be protected from its immediate environment.

Naturally, the new plexiglass case caught the attention of people online who shared some humorous commentary on the new protective measure.

“Hope the glass is not as fragile as their feelings,” remarked one user named Chairmanwumao on Reddit. A Cantonese pun for the word “plastic” has already been employed to describe the actions of the Liaison Office (膠味濃, transl.-extremely stupid).

Others on Reddit and Twitter began joking that it was a “glass coffin” similar to the one that houses the preserved body of PRC founder Mao Zedong in Beijing . “The same transparent glass as the coffin at Tian'anmen Square, great idea!” joked ShanghaiNPC on Twitter. Others were quick to point out the sad reality that the Chinese government acted with obvious haste to ensure the safety of their precious emblem. However, they have remained silent as pro-CCP thugs and name-tagless police officers terrorize peaceful protestors in Hong Kong.