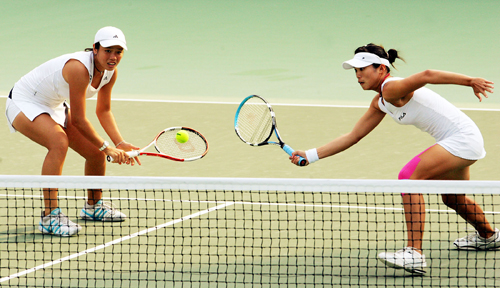 Overjoyed tennis pair Chan Yung-jan and Chuang Chia-jun pushed forward into the final of the women's doubles at the Australian Open with a stunning 6-3, 6-4 win over Chinese No.2 seeds Yan Zi and Zheng Jie. They've become the first Taiwanese tennis players ever to advance to a Grand Slam final.
Yan and Zheng were the defending champions, but their hopes of becoming the first women to defend their doubles' title in 13 years in the tournament were dashed by the excellent performance of the unseeded Chan and Chuang, whose landmark achievement has them writing a brand new chapter in Taiwan's tennis history.
Chan, 17, and Chuang, 22, who entered the competition on a wild card, held the only break in the opening set to take a one-set advantage in 37 minutes.
In a tense second set, both teams lost their serve once before Chan and Chuang broke their opponents for a second time at 4-4 and held their serve to steal a 6-4 victory in the second set, which took 46 minutes.
In the thrilling match, there were just two double faults, one by each pair, and four breaks of serve, three to the Taiwanese pair, who also won a total of 67 points as opposed to their rivals' 51. Chan is currently 75th in the world singles' rankings and 107th in doubles, while Chaung is ranked 200th in the singles and 75th in doubles.
"We lost to them [Yan and Zheng] in the Asian Games final and this is revenge for that," smiled Chan, who got a phone call from her excited mother Liu Hsieh-chen in Taipei, as she soaked up the applause in the Margaret Court Arena.
"This is the second time we've played them and we knew a bit more about their game. Winning in straight sets is an extra joy. We are very excited because it's a big surprise, " she said.
Chuang said the key to their success at Melbourne Park was being relaxed and having fun. "We are just trying to be relaxed and have fun and it looks like it is working," she said, adding that they are getting a lot of support from back home. "Lots of people are watching. Maybe we will go home as heroes."
Their match against the Chinese pair was indeed highly anticipated by local fans because Taiwan has not had a tennis stars since Wang Shi-ting, who won six WTA singles titles in her career and had a best world singles' ranking of 26. However, she never got beyond the third round in a Grand Slam between 1992 and 1999.
Although the exciting semifinal match took place mid-morning local time, many office workers in Taipei were planted in front of their television sets to watch the live broadcast of Taiwan's duo defeat China's Yan and Zheng.
Many in Taiwan were revved up for the match not only because it was the first time that anyone from Taiwan had gone so far in a Grand Slam tournament, but also because the opponents were from China, Taiwan's arch political rival.
The defeated Chinese pair, who won at Melbourne and Wimbledon last year to become China's first Grand Slam winners, appeared to be disappointed. "Our opponents played very well. In the second set we had some chances and a lot of break points. I'm not so happy because we wanted to go the final," said Zheng. Yan added, "We didn't play our best tennis today. They served well and volleyed very well and put a lot of pressure on us."
Chan and Chuang are to face Cara Black of Zimbabwe and Liezel Huber of South Africa in the final today at 12:00 p.m (Taiwan time). They have never played the African pair before, but have watched them play at the tournament.
"We'll do the same as we have been doing, just trying to do our best and have fun," said Chan in response to a question about preparations for the final.