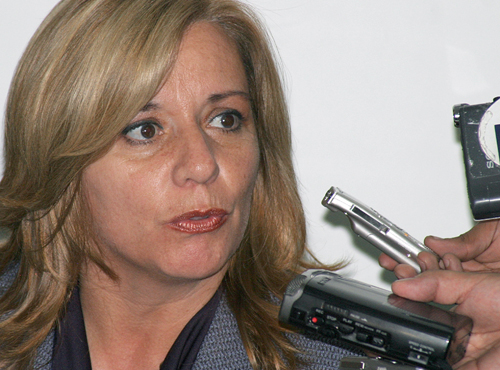 Ecuador's first female defense minister died Wednesday in the collision of two helicopters that also killed her daughter and five members of the military, officials said.
The mid-air wreck in the port city of Manta killed Defense Minister Guadalupe Larriva, 50, her daughter Claudia Avila, 17, and five more officials, Interior Secretary Gustavo Larrea confirmed.
In a televised interview Vice President Lenin Moreno said the helicopters were performing a night flight test "and in a bad maneuver it appears that the blades collided and the helicopters fell to the ground."
The crash took place near the military base in Manta, 260 kilometers southeast of the capital of Quito.
No top ranking commanders were on board the helicopters, Moreno said.
Pilot Celso Acosta and Coronel Marco Jurado were among the five officials killed. The rest were not immediately identified.
Newly appointed
Larriva was appointed by President Rafael Correa and both took office on January 15. She was Ecuador's first female defense chief and the first to have never served in the military.
In a short statement aired on Canal 1, Correa told "the Ecuadorean people to pray for Guadalupe, her daughter, the pilots, for her family members, for the government of Ecuador."
A strong police guard was in place at the crash site and rescue crews were on hand Wednesday evening, according to local media reports.
Correa appointed seven women to his Cabinet, saying he wanted to promote gender equality in his South American nation.