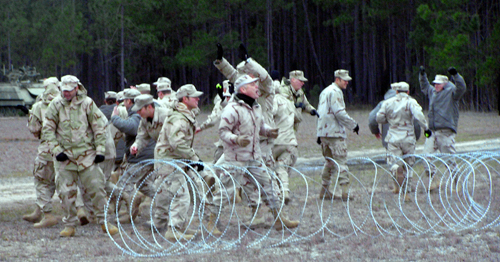 The military's new weapon is a ray gun that shoots a beam that makes people feel as if they will catch fire.
The technology is supposed to be harmless - a non-lethal way to get enemies to drop their weapons.
Military officials say it could save the lives of innocent civilians and service members in places like Iraq and Afghanistan.
The weapon is not expected to go into production until at least 2010, but all branches of the military have expressed interest in it, officials said.
During the first media demonstration of the weapon Wednesday, airmen fired beams from a large dish antenna mounted atop a Humvee at people pretending to be rioters and acting out other scenarios U.S. troops might encounter.
The crew fired beams from more than 455 meters away, nearly 17 times the range of existing non-lethal weapons, such as rubber bullets.
While the sudden, 54.44-degree Celsius heat was not painful, it was intense enough to make participants think their clothes were about to ignite.
"This is one of the key technologies for the future," said Marine Colonel Kirk Hymes, director of the non-lethal weapons program which helped develop the new weapon. "Non-lethal weapons are important for the escalation of force, especially in the environments our forces are operating in."
The system uses millimeter waves, which can penetrate only 1/64th of an inch of skin, just enough to cause discomfort. By comparison, common kitchen microwaves penetrate several inches of skin.