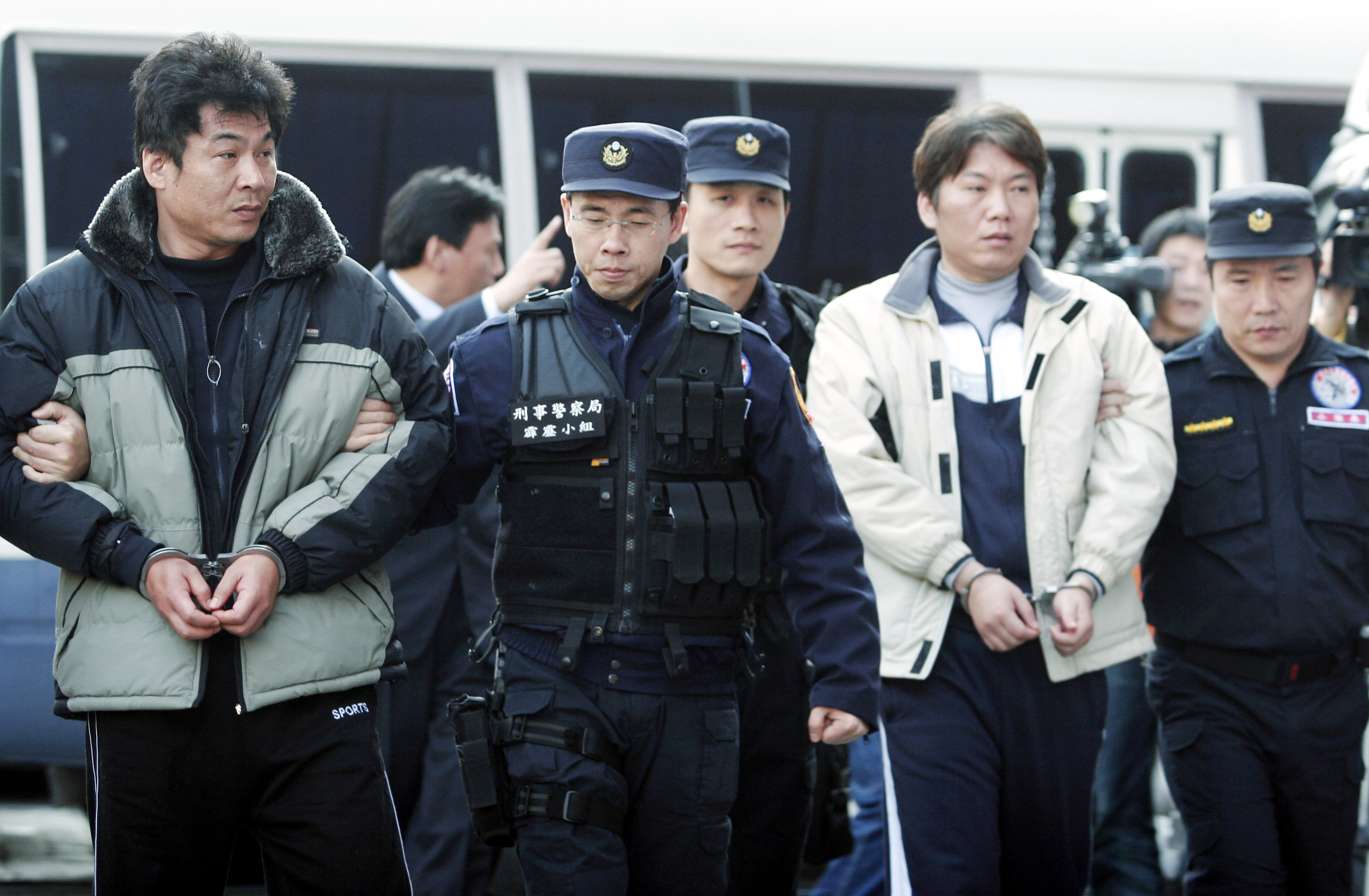 Lee Han-yang, who is suspected of making off with a large sum of money from the armored car he was driving, and his brother Lee Chin-tsan, were extradited to Taiwan yesterday afternoon after being caught by Chinese police and detained for about two weeks. Commissioner of Taiwan's Criminal Investigation Bureau Huang Mao-sui praised the Chinese police for their cooperation in the detection, arrest, and extradition of the two suspects.
According to a CIB statement, the armored car driver Lee Han-yang is suspected of having drugged his colleague at breakfast and taking off with NT$56 million he was transporting to banks in Taipei City on January 2. He allegedly fled to China on the same day to meet his brother. After being tipped off by Taiwan's CIB, Chinese police tracked down the two brothers and arrested them in Yunnan province on January 9.
The two brothers, hooded and handcuffed, were delivered by Chinese police to the Taiwan Red Cross on Taiwan's Matsu islands, a few kilometers off China's Fujian Province.
The two brothers were later flown to Taipei in a police helicopter, the National Police Administration said in a statement. The two will face investigation into their alleged involvement in the disappearance of the money, and will be confronted with four other suspects, in an effort to determine who and how many might have collaborated in the disappearance of the money, CIB commissioner said. The whereabouts of the stolen money is still unknown, he added.
China and Taiwan worked out an agreement to repatriate criminals and illegal immigrants in 1990.
The CIB noted in a statement that with crimes across the Taiwan Strait, such as extortion, drug trafficking, and fraud, having risen in the recent years, the level of cooperation between the two sides in fighting crime would become an important factor in maintaining public order.
There is a growing need to establish a systematic and normalized contact channel with Chinese law enforcement officers that would bring the two sides closer together in order to fight cross-strait crime, the statement read.
The apprehension and extradition of the Lee brothers came weeks after a Taiwanese tycoon Wang You-theng (王又曾) and his wife reportedly fled to Shanghai at the beginning of this year, days before several companies in his Rebar Asia Pacific Group became engulfed in financial problems.
The couple are now believed to be in the United States and a warrant has been issued for Wang's arrest.
China's apparent willingness to provide refuge for Wang was widely condemned in the Taiwanese media, which accused the mainland of routinely harboring Taiwanese fugitives.
In an apparent response to the accusations, China's official Xinhua News Agency reported earlier this week that it had sent 123 criminal suspects back to Taiwan since 2000.
The agency quoted Chinese Ministry of Public Security spokesman Wu Heping as promising that China police would make every effort to repatriate criminal suspects to Taiwan.