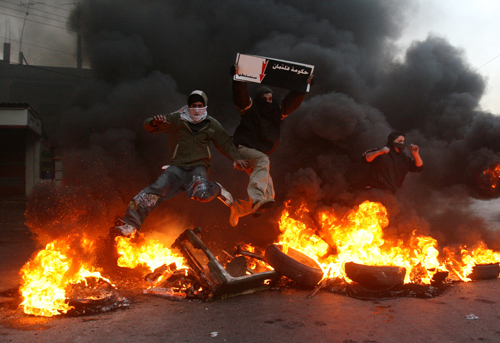 International donors pledged some US$7.6 billion in aid and loans yesterday for Lebanon's U.S.-backed prime minister and his economic reform program for the war-scarred country.
The money was pledged at a donor conference in Paris. The host, French President Jacques Chirac, announced the dollar figure after the more than 40 nations and financial institutions attending took turns over four hours in announcing their contributions.
The aid was toward the top end of what analysts had expected. It offered a boost for Lebanese Prime Minister Fuad Saniora as his government is locked in a power struggle with Iranian-backed Hezbollah and its allies, struggling under debt and facing the task of rebuilding following last year's war between Hezbollah and Israel that left parts of southern Lebanon in ruins.
"Your support will be essential in seeing Lebanon through," Saniora told the conference. "The cost of failure is too great to contemplate."
He added that Lebanon is "on the verge of a deep recession."
Chirac played auctioneer, pressuring participants to give. He gently chided Japan for not giving more than US$11 million, checked whether other pledges were in dollars or euros, and asked his aides "How much?"
"Be brief, be good and be generous," he said.
That donors gave billions showed that recent violence in Lebanon did not significantly dent international support for Saniora's government. Chirac opened the meeting with a plea that Lebanon "more than ever" needs international support.
World Bank President Paul Wolfowitz described Lebanon as being at a "critical crossroads." Denmark's representative said Saniora would return home "knowing that you have friends around the world."
The war caused US$2.4 billion in direct damages, and US$700-US$800 million in indirect damages, said Wolfowitz. He said Lebanon's economy, instead of growing as expected last year, shrank by 6 percent. Lebanon's US$40 billion (euro31 billion) of state debt is equivalent to about 185 percent of its annual economic output, making it one of the world's most indebted nations.
Many praised Saniora's reform proposals. Wolfowitz called them "ambitious, comprehensive and coherent." The new U.N. secretary-general, Ban Ki-Moon, urged donors to "favorably and generously" support the plan.
Saudi Foreign Minister Prince Saud al-Faisal said his country would channel US$1 billion (euro770 million) in development funding and an additional US$100 million (euro77 million) grant for the Lebanese government.
Chirac said half of a new euro500 million (US$650 million) loan from France would be extended this year. The European Commission, the EU's executive arm, pledged some euro500 million (US$649 million) in loans or aid.
U.S. Secretary of State Condoleezza Rice confirmed that the Bush administration would seek US$770 million (euro592 million) for a new comprehensive package of which a substantial part would be grants, not loans. That money must be approved by U.S. Congress, and would more than triple U.S. economic aid to Lebanon.
"This is a package that is for Lebanon," Rice said when asked if the money is contingent on the survival of a U.S.-backed government in Beirut. "Lebanon is a democracy."
Reflecting continuing tensions in his nation, Saniora yesterday abruptly abandoned plans to attend an international gathering this week of world political and business leaders, the World Economic Forum in Davos, Switzerland.