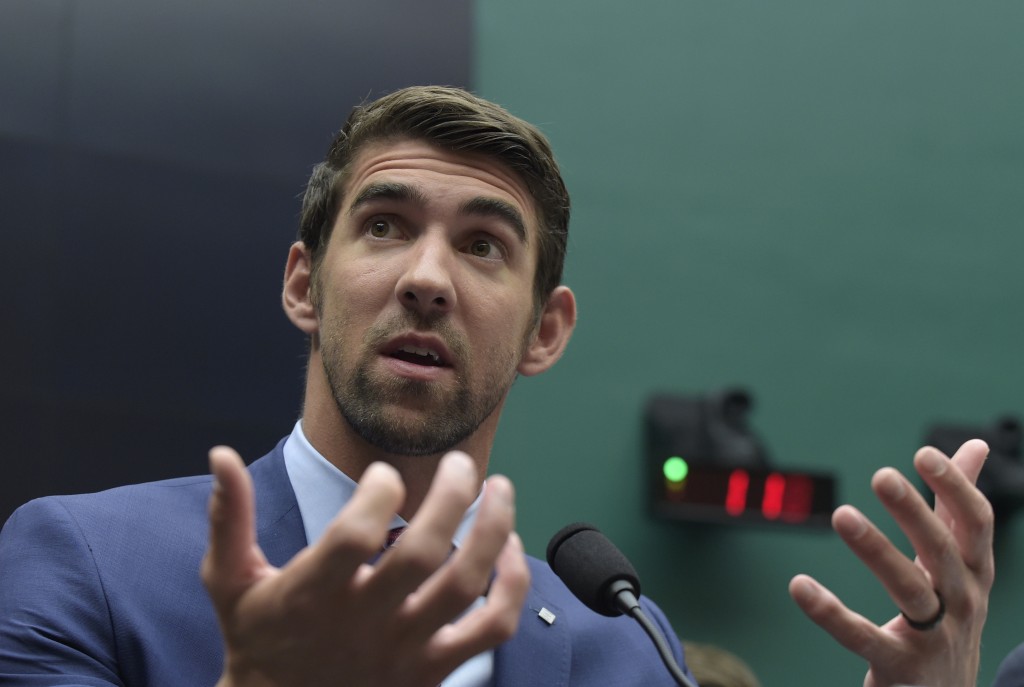 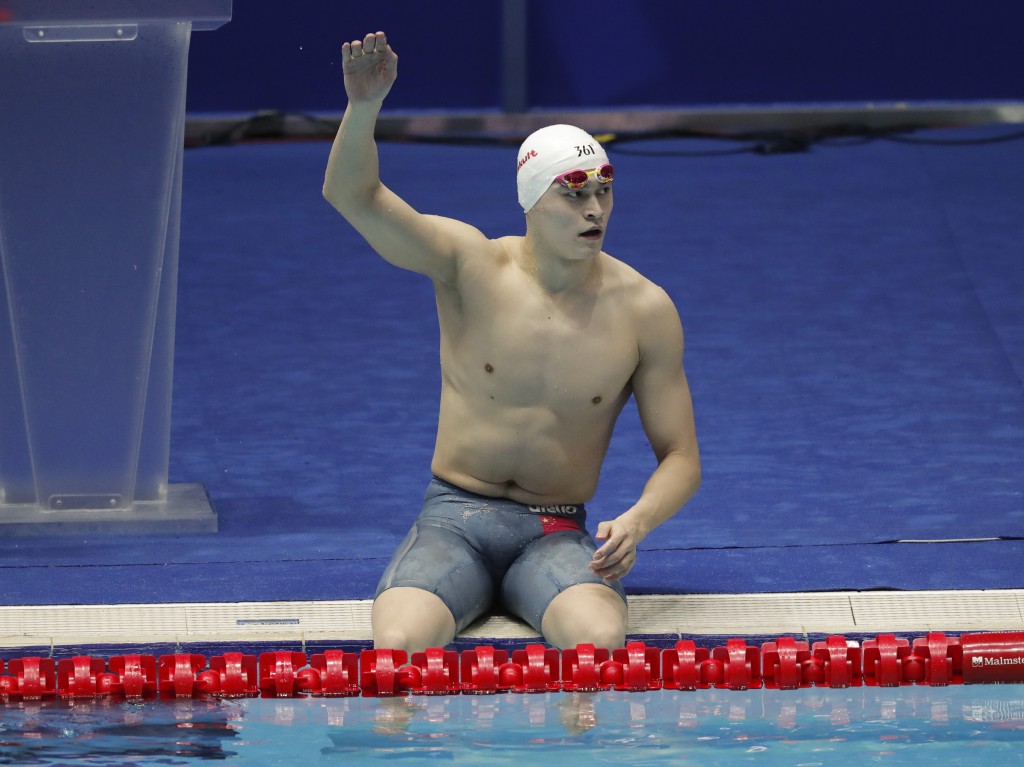 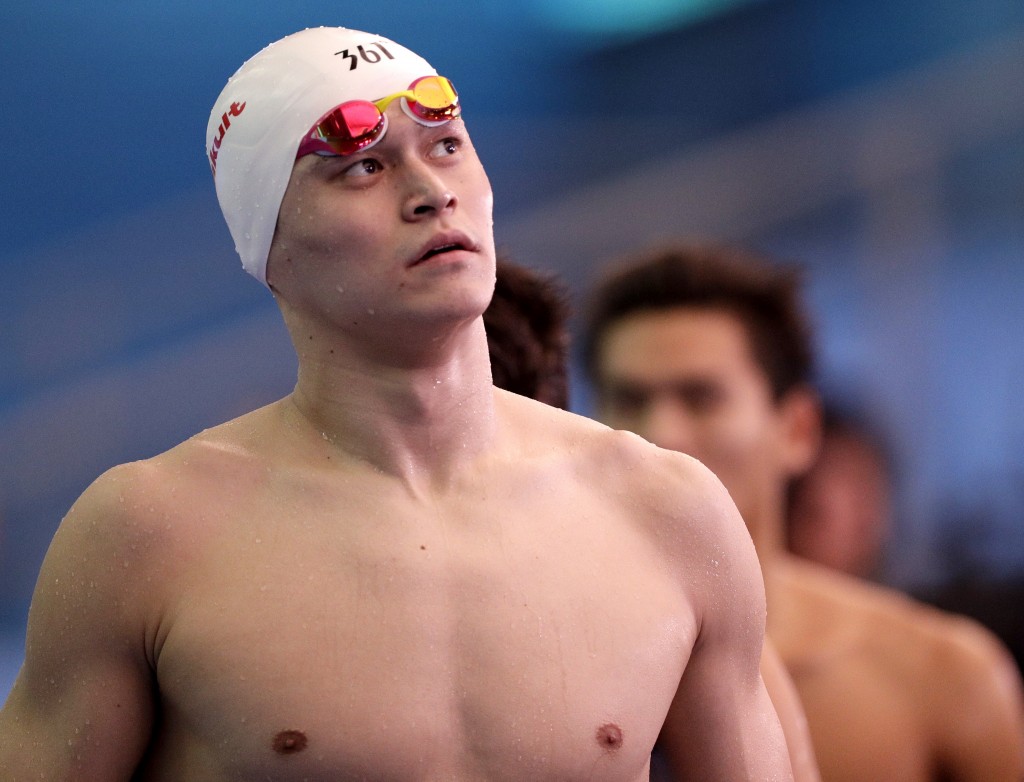 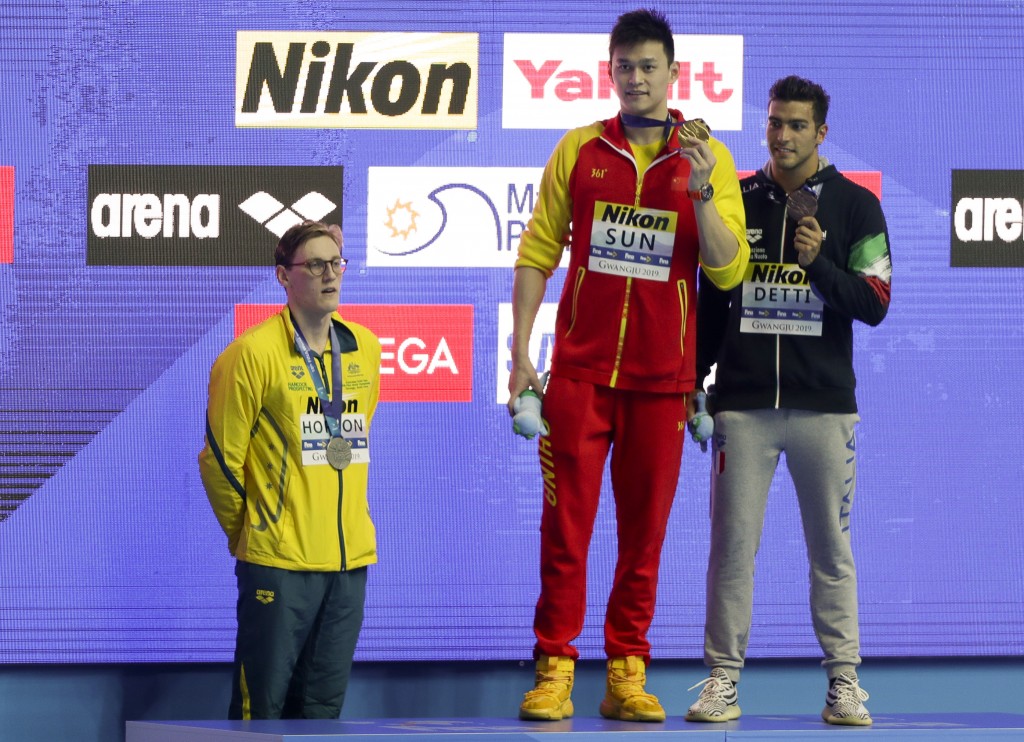 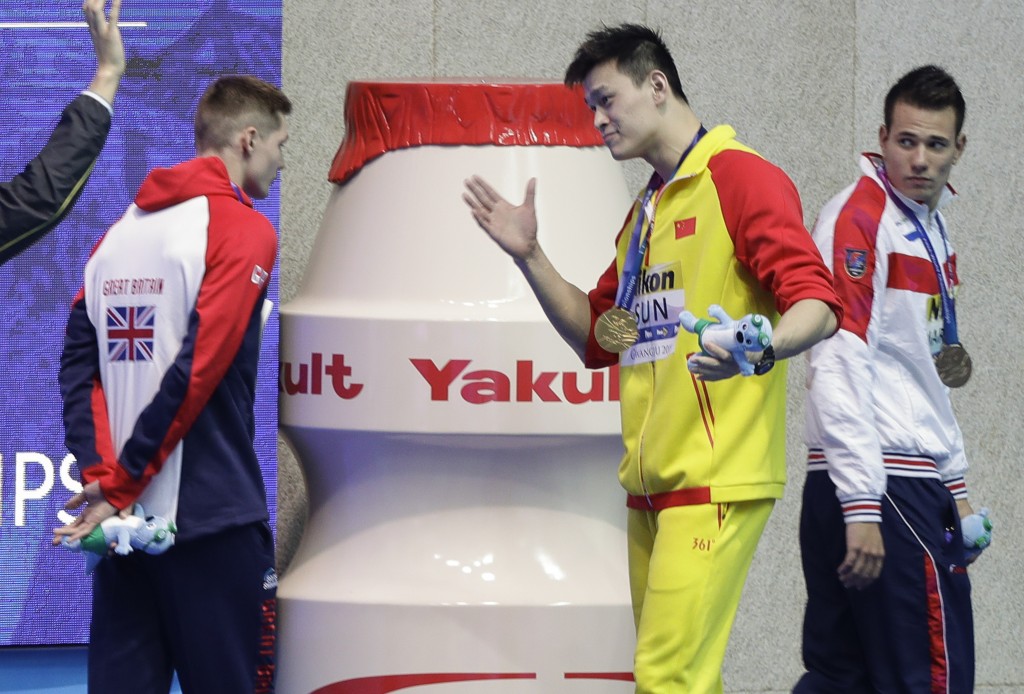 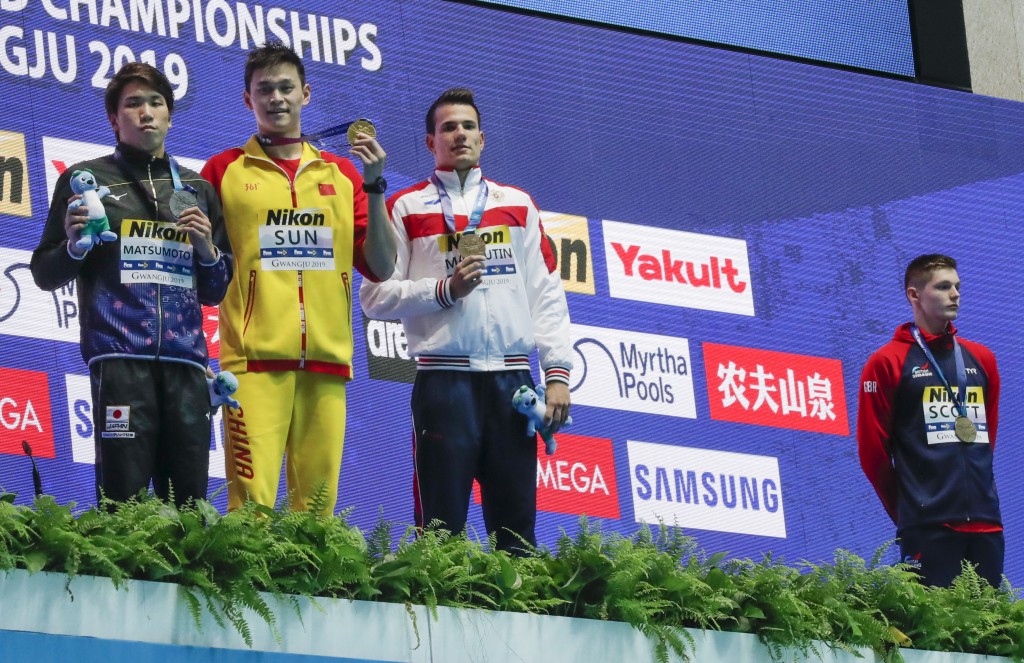 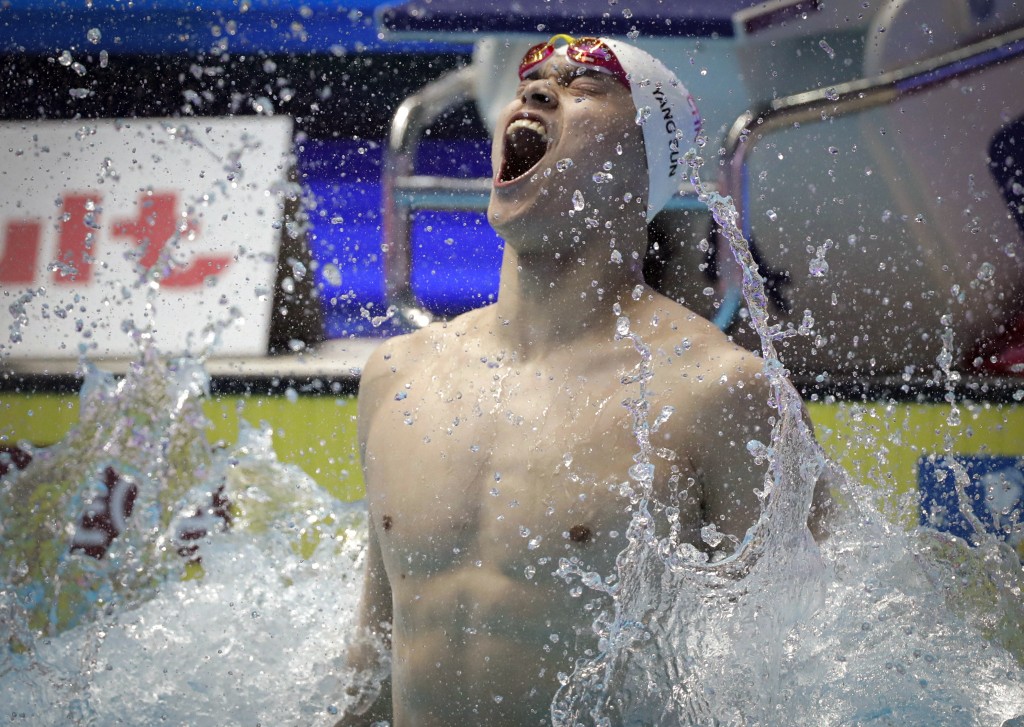 Michael Phelps is watching the world championships from afar, enjoying his ever-growing family while tackling the challenges of life after swimming.

But the winningest athlete in Olympic history is still passionate about the sport that meant so much to his life.

And, yes, he still gets angry when the subject turns to the scourge of doping.

"No one cares. No one wants to do anything about it," said Phelps, his voice rising on the other end of the line Friday when reached during breakfast at his Arizona home.

The issue has taken on a new sense of urgency at the FINA world championships in Gwangju, South Korea, where Chinese star Sun Yang was allowed to compete — and collect a couple of gold medals — even after reports that he smashed a vial of blood with a hammer when drug testers who showed up to take a sample.

FINA decided to let Sun off with a warning, which essentially meant no punishment at all for what should be an egregious violation of doping rules — especially since the swimmer already tested positive in 2014 for a banned substance. Sun still faces a hearing before the Court of Arbitration for Sport that could lead to major sanctions, but the lack of action by a governing body that has long been viewed as laughably inept and mainly concerned with making sure all the checks clear prompted two swimmers to take a bold stance in Gwangju.

Australia's Mack Horton, a longtime rival of Sun, refused to take a spot on the medal stand after finishing second to him in the 400-meter freestyle. Britain's Duncan Scott did the same after settling for a bronze medal in the 200 free, also won by Sun.

Phelps, who has said he never felt like he swam a final that didn't include at least one doped-up swimmer, can understand the frustration expressed by Horton and Scott.

On the other hand, he doubts their dramatic gesture will have any real impact.

"I love how people are standing up and voicing their opinion," Phelps said. "But at the end of the day, there's only one person, only one group of people who can really change this. That's FINA. When FINA wants to do something, wants to change how this sport is seen after all these positive drug tests that are occurring, after all this controversy, maybe they'll do something about it. It's in their hands, in their control.'

FINA has shown no eagerness to aggressively tackle the doping issue.

In fact, the organization hastily added rules to its code of conduct that were designed to stifle the sort of silent protests taken by Horton and Scott, showing it's more concerned with punishing those who complain than those who might be seeking a chemically enhanced edge.

While encouraged by the efforts to form a swimmers union, which would give the athletes a greater say in the way the sport is run, Phelps isn't so keen on individual protests like the ones seen in Gwangju. He wonders if Horton and Scott undermined their own performances by focusing too much on Sun.

"When your energy goes into that, it takes away from your swimming," Phelps said. "I was very clear how frustrated I was that people chose to use performance-enhancing drugs instead of preparing themselves, putting in the wok and putting in the training and doing what it takes to be a champion instead of taking the easy way out. But I wasn't going to waste my time and my energy to focus on somebody else and what they were doing. That was out of my control."

Clearly, that approach worked well for Phelps. He won 23 Olympics golds, and 28 medals overall, before retiring after the 2016 Rio Games. At 34, he is content with his staggering legacy and laughs off any suggestion that he might launch another comeback. His wife, Nicole, is expecting their third child in October, following 3-year-old Boomer and 1-year-old Beckett, and Phelps is relishing the chance to be fully invested in his kids' lives.

But swimming will always be a huge part of his life.

He weighs less than he did in Rio and still heads to the pool almost every day, recognizing that it's as much a mental salve as a means of staying in shape. "That's the one place where I can clear my head," said Phelps, who battled depression during his career. "It's so quiet in the pool."

He is still involved in the business side of the sport, running the MP swimwear line with an eye toward building "my own little dream team" for the Tokyo Olympics. He recently signed up former training partner Chase Kalisz, a silver medalist in Rio, and hopes to add other athletes by next summer.

In Gwangju, two of his longstanding world records were taken down. Hungary's Kristof Milak shattered the 200 butterfly mark that had stood for a decade, while American Caeleb Dressel eclipsed the 100 fly record in a semifinal heat Friday, another mark that was set in 2009.

"I was up at the crack of dawn this morning to see if I would have the record for another 24 hours," Phelps said.

He wasn't surprised that Dressel claimed the 100 fly record but thought his mark in the 200 would hold up a bit longer. The 200 fly was always Phelps' baby, the event in which he set his first world record in 2001 and held the best time for more than 18 years.

"It was almost bittersweet in a way," Phelps said. "The last few days, I've been going back through the memories of it all, going back to 2001 when I broke it for the first time. ... But records are made to be broken. I said that my whole career. In a way, I'm kind of excited because I worried that the sport would not continue to have kids who wanted to do whatever it takes to accomplish their dreams and passions."

As for the seedier side of swimming, Phelps will continue to speak out. He supports a one-and-done philosophy for dopers, believing anyone who tests positive should automatically receive a lifetime ban. He'll keep pushing those in charge to do the right thing, while remaining realistic about the prospects for any significant change.

"I'm sure Shirley Babashoff didn't want to stand up next to the East Germans to receive a silver medal," Phelps said, referring to the U.S. swimmer who famously called out the most notorious doping nation at the 1976 Olympics and was proved later to be totally correct in her suspicions.

Paul Newberry is a sports columnist for The Associated Press. Write to him at pnewberry@ap.org or at www.twitter.com/pnewberry1963 His work can be found at https://apnews.com/search/paulnewberry