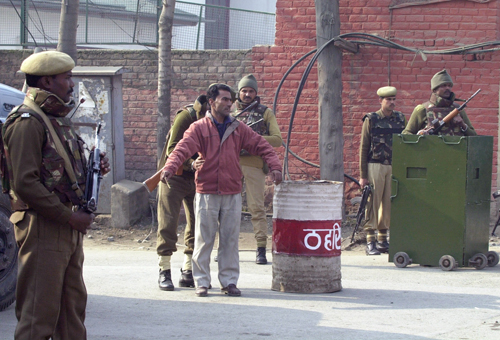 Security forces set up roadblocks and snipers took up positions on government buildings in India's capital yesterday to prevent possible militant attacks ahead of national day celebrations, officials said.
Authorities sealed off much of downtown New Delhi, through which a parade - the highlight of today's Republic Day festivities - passes every year.
Officials announced that the city's metro rail service would be partially shut down for several hours today.
Russia's President Vladimir Putin, who arrived yesterday for a two-day visit, was to be the chief guest at today's parade.
At least 15,000 police and security forces have been deployed around the city, said Dipendra Pathak, a top police official.
Although there have been no specific threats, a spate of deadly terror attacks in 2006 - from the bombings of a temple in the Hindu holy city of Varanasi to the Mumbai railway bombings that killed more than 200 people - warranted the extra security, Pathak said.
Also, several separatist groups in the country's restive northeast and in the Indian-controlled part of Kashmir have called general strikes for Republic Day, which marks the adoption of India's democratic constitution in 1950. The country gained freedom from British colonial rule in 1947.
Security was tightened at all major government telecommunications and power installations, with additional personnel deployed, Pathak said.
In the Indian-controlled portion of Kashmir, thousands of police and security forces frisked people and searched vehicles for any explosives in heavy-guarded Srinagar, the summer capital of India's Jammu-Kashmir state.
Authorities have closed roads leading to a soccer stadium in Srinagar where a parade was to be held today, said Farooq Ahmed, a deputy-inspector general of police.
"There are intelligence inputs that militants will try to disrupt the Republic Day functions in Kashmir," Ahmed said. "We're doing everything possible to thwart any possible attempt."
Hezb-ul-Mujahedeen, the largest Kashmiri rebel group, and the All Parties Hurriyat Conference, an umbrella group of separatist political and religious groups, have all called for a general strike in the Kashmir Valley on India's national day.
The Hezb-ul-Mujahedeen is one of more than a dozen Islamic militant groups that have been fighting since 1989, seeking Muslim-majority Kashmir's independence from predominantly Hindu India, or its merger with Islamic Pakistan.
More than 68,000 people, most of them civilians, have been killed in the 18-year old conflict.
The Himalayan territory of Kashmir is divided between India and Pakistan, which both claim it in entirety and have fought two wars over it since their independence from Britain in 1947.