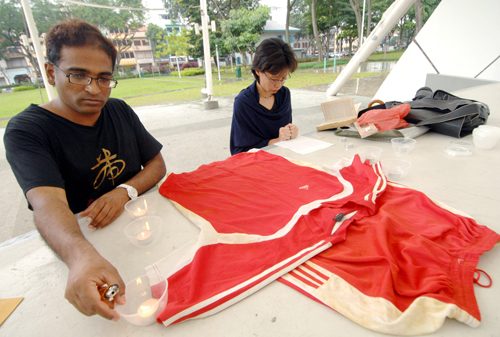 A 21-year-old Nigerian is set to be hanged for drug smuggling in Singapore this morning, despite international protests and a last-minute hunger strike by Singaporean civil rights activists.
Iwuchukwu Amara Tochi will be hanged at dawn today, according to an official at the Nigerian embassy in Singapore, after he was arrested at Singapore's Changi Airport in November 2004 for carrying about 727 grams of heroin.
Tochi's family has not traveled to Singapore to see him because they cannot afford the plane tickets, the embassy official said, adding that "he was well."
Nigerian President Olusegun Obasanjo asked the Singapore government on Tuesday to grant a reprieve to Tochi, who was a champion football player in Nigeria according to human rights group, Singapore Anti-Death Penalty Campaign.
Singapore's Ministry of Home Affairs declined to comment on Obasanjo's appeal.
Amnesty International, which also appealed to Singapore last week to spare Tochi's life, said the judge who convicted Tochi of drug smuggling "appears to have accepted that he might not have realized the substance he was carrying was heroin."
'Judicial murder'
The death sentence is mandatory for anyone caught carrying more than 15 grams of heroin in Singapore.
Two leading Singapore civil rights activist started a 24-hour hunger strike in protest at the planned execution.
"The state does not have the right to take a life. It's judicial murder," said M. Ravi, a human rights lawyer, as he sat on a straw mat laid out in Singapore's Speakers' Corner, the only place in Singapore where citizens can make public speeches.
The hanging of Tochi comes more than a year after Singapore hanged an Australian man, Nguyen Tuong Van, 25, in December 2005 amid much public outcry, and despite repeated pleas for clemency, including from the Australian parliament.
Yesterday, a Singapore court charged another Australian for drug trafficking, but he narrowly escaped the death sentence, which is mandatory for anyone caught with more than 500 grams of cannabis.
Michael Karras, 38, was arrested on January 9 after he was found with about 495 grams of cannabis. Karras, who is pleading not guilty according to his lawyer S.S. Dhillon, faces a maximum of 40 years in jail and 30 strokes of the cane.
Singapore has the highest per capita execution rate in the world, and has hanged more than 420 people since 1991, according to Amnesty International.
The death penalties in Singapore's anti-drug laws have been criticized by human rights groups as inhumane. But the Singapore government says they are necessary because of the city-state's close location to drug-producing countries.