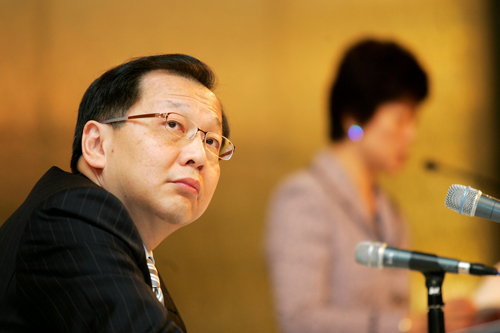 Taiwan Semiconductor Manufacturing Co., the world's largest custom-chip maker, posted its first profit decline in five quarters as sales growth slowed for Motorola Inc. cell phones and Texas Instruments Inc. handset components.
Fourth-quarter net income fell 18 percent to NT$27.91 billion (US$851 million), or NT$1.08 per share, from NT$33.90 billion, or NT$1.31, a year earlier, the Hsinchu, Taiwan-based company said in a statement yesterday.
Texas Instruments and Motorola, users of Taiwan Semiconductor's most advanced chips, this month both reported lower-than-expected earnings and rising inventories. The slump is set to continue this quarter, with Taiwan Semiconductor forecasting a further sales decline from a year earlier.
"Their outlook for the first quarter is below our expectations," Ernest Chiang, who manages US$27 million of assets, which doesn't include Taiwan Semiconductor, for Ta Chong Investment Trust Corp., said in Taipei. "We don't have so much confidence in their second quarter either."
The profit was in line with the median estimate of NT$27.2 billion in a Bloomberg survey of 13 analysts. The company's shares gained 0.7 percent to NT$71 yesterday in Taipei before the earnings were announced, compared with a 0.2 percent decline in the benchmark Taiex. The stock has climbed 5.2 percent this year compared with a 1.3 percent increase in the benchmark Taiex.
Taiwan Semiconductor earlier reported sales declined 5.4 percent to NT$74.96 billion, from NT$79.23 billion a year earlier. Operating income for the fourth-quarter fell 20.4 percent to NT$27.4 billion, the company said. Non-operating income rose 78 percent to NT$2.1 billion.
"Their operating results were slightly disappointing," said Rick Hsu, an analyst at Nomura Securities Co. in Taipei. "The lower result was influenced by them having lower contributions" from their more advanced chips.
Sales for the current quarter will be between NT$62 billion and NT$64 billion, the company said at an investors' conference. That is a decline of between 17 percent and 19 percent from the NT$77.29 billion the company posted a year earlier. Sales and profit margins will rise in the second quarter, Tsai said.
Worldwide semiconductor-industry sales will grow between 4 percent and 6 percent this year, compared with growth of between 8 percent and 9 percent last year, Taiwan Semiconductor chief executive Rick Tsai told investors in Taipei.
"We're seeing a bottom of the inventory correction in the first quarter," Tsai said. "We will begin to recover in the end- of-March timeframe."
Semiconductor inventories in the electronics industry rose 5 percent during the fourth quarter to US$4.3 billion, compared with a US$700 million shortage a year earlier, according industry researcher ISuppli Corp. Growth in sales of mobile phones and electronics didn't keep pace with production levels last year, leading to the oversupply.
Motorola, the world's second-largest cell-phone maker this month reported profit declined 48 percent to US$624 million, missing its own forecasts on lower demand for mobiles.
Texas Instruments, the world's biggest maker of mobile-phone chips, this month reported profit rose 2 percent to US$668 million, missing analysts estimates because demand for handsets was "unseasonably weak." The company supplies chips made by Taiwan Semiconductor for use in Motorola's phones.
Taiwan Semiconductor's gross margin, or the percentage of sales left after deducting the cost of goods sold, fell to 46 percent in the fourth quarter, compared with 52.1 percent a year earlier and 49.9 percent in the previous quarter.
Profit margin, which measures the percentage of profit from total sales, fell to 37.2 percent, compared with 42.8 percent a year earlier and 39.4 percent in the previous quarter.
Looking forward
The company, which holds 50 percent of the world's custom-chip making business, is outspending rivals on new equipment and technology. It spent US$2.46 billion on capital equipment last year, and will raise it to between US$2.6 billion and US$2.8 billion this year, compared with last year's US$1 billion budget for nearest rival United Microelectronics Corp.
To reduce its cash levels, the company will undertake a share buyback this year, which will include buying shares owned by major shareholder Royal Philips Electronics NV, Tsai said.
"We want to better utilize our cash position," Tsai said. The buyback will also be conducted to minimize any negative impact from Philips' sale of its 16.2 percent stake in the company.
Philips Chief Executive Officer Gerard Kleisterlee said Monday the company wants to exit its shareholding in Taiwan Semiconductor because there's "no business relation" between the two companies, repeating its earlier pledge to lower its holding in the Taiwanese company in a "responsible manner."
The Philips' stake is valued at approximately NT$297 billion, based on yesterday's closing share price. Taiwan Semiconductor had NT$177.98 billion in cash and near-cash equivalents at the end December, the company said in a statement yesterday.