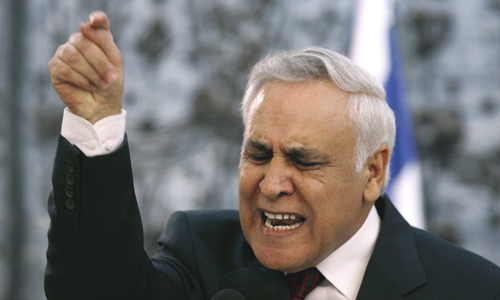 Under a torrent of demands for his resignation and a growing movement to impeach him, Israeli President Moshe Katsav asked parliament Wednesday for a leave of absence. The move came one day after the attorney general announced he planned to charge Mr. Katsav with rape and other sexual offenses following months of investigation.
Katsav, who said Wednesday he would resign immediately if he is officially indicted, now sits perched at what many Israelis view as the pinnacle - literally and figuratively - of a government in a state of moral decline.
A slew of civilian and military leaders here are under investigation for various types of wrongdoing, and the nation's regard for its top elected official is at an all-time low, with Israeli Prime Minister Ehud Olmert garnering approval ratings as low as 14 percent. And although Israelis have been showing increasingly less regard for their once-venerated institutions over the past decade, this new slide in public confidence coincides with a range of indicators pointing in the direction of change.
This, some pollsters say, includes the increased likelihood of Israel heading toward earlier-than-planned elections. In the interim, it is improbable that Israel's government and even its Army, historically viewed as an institution above the political fray, will have the wherewithal and support necessary to make groundbreaking moves toward peace with the Palestinians or with Syria, both of which are in the offing.
"What happened in the last few years is that we've had the erosion of all government systems in Israel, the justice department, the courts, the leaders, and especially the politicians. If you attach the title 'politician' to anyone, his ranking will immediately go down 20 points," says Rafi Smith, director of the Smith Polling Institute in Ramat Gan, near Tel Aviv.
"The credibility of all the leaders is in question, because most of them are either under investigation or have a cloud of corruption over them," Smith says, "and there is a perception that corruption is a real problem here."
Several studies prove the point. In the 2006 Transparency International Corruption Perceptions Index, published by the Berlin-based graft watchdog, Israel ranks 34th. Israel's ranking, says one Israeli watchdog group, is down from the late 1990s, when it was in the high teens.
A 'me' generation
"The moral standards have declined in that it's become a 'me' generation where private gain trumps public good," says Michael Partem, the deputy chairman of the Movement for Quality Government in Israel. The organization, which has nearly 20,000 members, has come to play a particularly active in role in fighting corruption and making legal challenges to poor governance. It runs four hotlines and made 1,500 legal complaints last year - some of which were then taken up by the Supreme Court. It also played a critical role in calling for the establishment of the Winograd Commission, which is investigating the conduct of various leaders during last summer's war between Israel and Lebanon.
Partem, a lawyer, points out that the public's increasingly bleak perception of its most senior leaders comes amid increased expectations of upstanding behavior. Katsav is not the first Israeli politician to be accused of sexual misconduct in office, but in decades past, victims were less likely to speak out and the powerful were much more likely to be protected.
"There are changing standards and norms," Partem says. "Things that were tolerated 20, 30 years ago are not tolerated today. Certainly the abuse of power for sexual favors has been around a long time, but the public tolerance for it is much, much lower."
To be sure, political figures in many of the most developed countries suffer from image problems. The spreading sense that political life has become more of a place for self-gratification and greed than achieving ideological goals is not one that is limited to Israel. But Israelis seem to be taking the sting especially hard, given that the country was founded on the ideals of social equality, and that Katsav had once been viewed as a success story.
Born in Iran, Katsav's rise to the presidency was seen as an example of Jews from Muslim countries - often marginalized by the Ashkenazi establishment that fled Europe - finally arriving in positions of power.
Now, some critics say Katsav's office should be abolished altogether.
Columnist Ben Caspit, writing in the popular newspaper Maariv, joined a chorus of voices demanding Katsav's resignation, and then some.
"We have no need for a president," Caspit wrote. "Show me the last president who contributed anything to the people, to the state, to unity, to security, to the economy, to anything. [...] It is an outdated, tedious, unnecessary, wasteful institution, which consists solely of benefits, honors, and nonsense. The opulent residence, the ceremonies, the trips, the bodyguards, the cars, the budgets. It costs a fortune and is of no use."
Olmert, meanwhile, is being investigated for possible wrongdoing in a banking sale, during the 2005 privatization of the country's second largest bank, Bank Leumi, when Olmert was serving as finance minister. Other key figures are also on trial. Former Justice Minister Haim Ramon is charged with sexual misconduct while Tzahi Hanegbi, a former minister of the environment, is charged with making illegal appointments.
And it remains unclear whether the resignation last week of Dan Halutz, the chief of staff of the Israel Defense Forces, will free Olmert of the taint associated with last summer's war or simply drag his popularity even lower. A poll done by Smith - in conjunction with Israel's Channel 10 - on the day of Halutz's resignation last week showed the sway of public opinion was not in Olmert's favor. Sixty-nine percent of respondents said Olmert should resign, while an overwhelming 85 percent said Defense Minister Amir Peretz should resign. Some two-thirds said they hoped the parties would call for early elections.