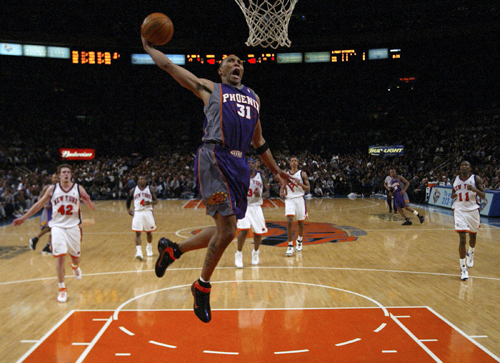 There's infectious good and infectious bad.
Infectious bad Wednesday night involved the germs that knocked big men Jake Voskuhl and Melvin Ely out of the Bobcats' options. On a night when four big men were out, Voskuhl and Ely would have helped.
Infectious good involved Gerald Wallace's effort to inspire his teammates. Wallace had 29 points and 11 rebounds, but that didn't overcome the Detroit Pistons in a 103-92 loss.
The Bobcats were down to 10 players, and you can't afford to be shorthanded against the Pistons' ensemble. That was particularly telling in the fourth quarter, when Detroit shot 69percent from the field.
Detroit scored off 12 of its last 14 possessions, and the Bobcats' second "stop" in the span was actually Pistons guard Chauncey Billups dribbling away the last 16 seconds.
Unable to counter
"Any time we stopped them inside, they'd just kick it out" to a shooter, said Bobcats guard Matt Carroll. "They just had so many choices. Sheed (Rasheed Wallace with 20 points) was making them from way out, and we couldn't counter that."
Rasheed Wallace was tremendous in the final quarter, hitting 3-of-3 from the field and 4-of-4 from the foul line. That made a three-point game with eight minutes left look silly by the buzzer.
Injured squad
Here's the greater concern: The Bobcats flew out for their first West Coast trip as shorthanded as they've been all season.
Primoz Brezec (bulging disc in his lower back) and Brevin Knight (abdominal surgery) are expected to miss the three-game swing. Ely (upper respiratory infection) didn't fly with the team. The Bobcats hope Voskuhl and Othella Harrington (left knee pain) can play sometime during the trip.
Much like last season, a team that once looked so overloaded with big men is now hurting inside. Wallace is playing out of position at power forward, and Sean May (14 points and six rebounds) played for the first time in five games, after soreness in his right knee.
The healthiest big men Wednesday were Emeka Okafor (17 points and 16 rebounds) and rookie Ryan Hollins.
Befuddled Hollins
However, Hollins was so befuddled, trying to guard various Detroit big men, that coach Bernie Bickerstaff limited him to just three minutes.
Gerald Wallace carried his team offensively, despite chronic pain from a separated right shoulder.
"I'm never going be fully healthy," Wallace said. "My shoulder is the primary concern at the moment, and that's not going to be right all season."
In other NBA action on Wednesday: Toronto 90, Oklahoma City 88; Philadelphia 118, Cleveland 115; Indiana 96, Miami 94; Atlanta 82, Boston 76; Phoenix 112, NY Knicks 107; Houston 90, San Antonio 85; Memphis 132, Utah 130; Sacramento 114, Milwaukee 106; Portland 101, Minnesota 98; Golden State 110, New Jersey 109.