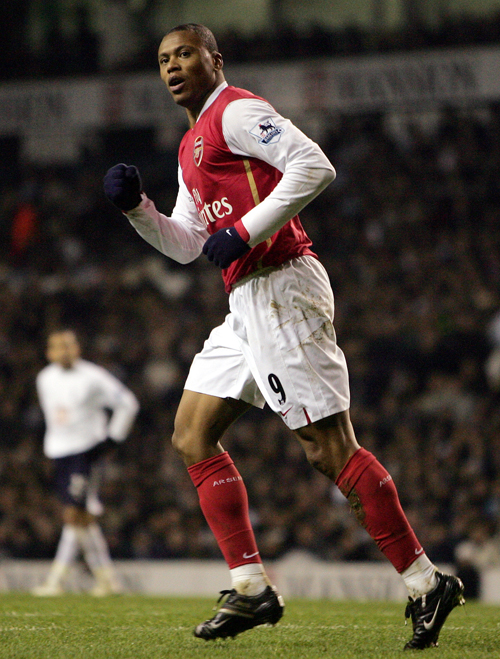 Arsene Wenger believes Brazilian midfielder Julio Baptista is finally ready to play a key role in Arsenal's challenge for honors.
Baptista, nicknamed the Beast, had struggled to make an impact with Wenger's side since his pre-season loan move from Real Madrid.
But he showed he is starting to adapt to English football as his double strike sparked Arsenal's superb fightback to earn a 2-2 draw in the first leg of the League Cup semi-final against Tottenham on Wednesday night.
Baptista could have been forgiven for thinking he was in for another dispiriting night after his own goal following Dimitar Berbatov's early strike gave Tottenham a 2-0 lead at White Hart Lane.
But the former Sevilla player made himself a hero with the Arsenal fans by scoring twice from close range in the second half to put his side back in the tie ahead of next Wednesday's second leg.
Wenger said: "Julio Baptista has shown again what a player he is. He scored an own goal, but instead of feeling sorry for himself he scored two for us.
"He is mentally a very strong player and he will get his chance to play more as the season goes on.
Wenger has allowed Baptista to adapt gradually and the League Cup has been his training ground.
He obviously enjoys the competition after scoring four times in Arsenal's 6-3 win at Liverpool in the quarter-finals.
"He likes it here and likes the atmosphere inside the squad," Wenger added. "It is a different game than in Spain but he has enough physical and mental strength to adapt.
Suited in the center
"You can play him anywhere there is a hole. He has the sense to get into the box from deep positions when it is needed, so the central role is more suited for him."
Wenger, who may be without Alexander Hleb for several weeks after he suffered a hamstring injury, once again fielded an inexperienced side as he kept faith with his young players and he was rewarded with an heroic display.
"It is great for the confidence of the young players to know that, away from home, they can come back after a little bit of a shaky start," Wenger said.
"Many teams so young would have crumbled at 2-0, but we still kept going and came back.
Tottenham are unbeaten in their 12 matches in the League, FA and UEFA Cups this season, but there was an overwhelming sense of resignation from boss Martin Jol.
He admitted his side had squandered a glorious chance to take a giant step towards their first final in five years and claimed Berbatov's groin injury in the first half was decisive.
"We are very disappointed but we only have ourselves to blame. We have to learn from this.
"In the first 25 minutes we were outstanding but when Berbatov went off that had a big effect. He was holding the ball up and we missed him when he went off.
"We needed to get a third goal but we couldn't keep the ball in the second half and they kept coming back.
"Even then it needed two mistakes from us for them to score, but that is another thing we need to learn. If you lose the momentum you can concede goals."
Berbatov had headed Tottenham into the lead after 12 minutes before Baptista deflected Tom Huddlestone's free-kick into his own net nine minutes later.
But Wenger's young guns refused to accept defeat and Baptista turned in Emmanuel Eboue's cross after 64 minutes before sliding in to equalize in the 77th minute.