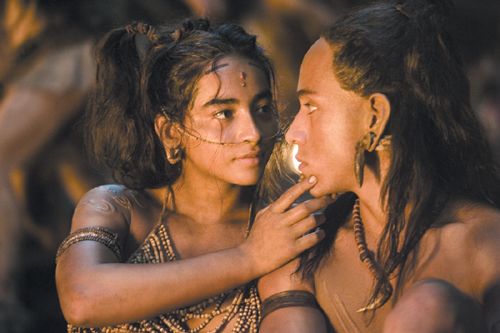 Apocalypto
阿波卡獵逃
Directed by: Mel Gibson
Starring: Rudy Youngblood, Dalia Hernandez, Jonathan Brewer and Morris Birdyellowhead
Opens: Today, January 26
Degenerate societies on the verge of extinction hold a powerful grip on Mel Gibson's imagination. From his performances in the dystopian "Mad Max" films through his directorial efforts in "Braveheart" and "The Passion of the Christ," he often returns to graphically violent variations on the theme.
Are the films warnings to modern viewers, object lessons on the process of civilization's collapse? After viewing his ambitious, audacious Yucatan chase movie "Apocalypto," the answer is clearly yes. It's a stern message picture in the trappings of an action-packed adventure.
As in "The Passion," Gibson's actors speak in a subtitled dialect (Mayan) while he tells the story in almost purely cinematic terms. Where there is talk, it doesn't drive the action but characterizes the protagonists - precisely what effective dialogue should always do but rarely does.
After a slow, tense zoom into the jungle's emerald underbrush, the film starts with a bang, as a group of hunters dash after a fleeing tapir. A footrace through dense vegetation could become incoherent unless it's skillfully directed, and Gibson proves his command of the material swiftly and decisively. The pursuit is exhilarating, dizzyingly claustrophobic and suspenseful. It establishes a sense of the teammates' individual personalities - and their dinner's terror - as they lure the animal into a spiked trap.
Jaguar Paw (Rudy Youngblood), who divvies up the meat, is a natural leader. The successful hunt ends with Jaguar resting his head tenderly against the swollen belly of his wife, Seven (Dalia Hernandez), as their unborn child kicks along with the fireside drums. Life is harsh and uncertain here, but there is community and an Eden-like beauty, as well.
A raiding party from a neighboring Mayan metropolis shatters that tranquility, turning the hunters into prey and prisoners. The combat is lurid, with Gibson pushing the special effects art of the arterial spray to new heights.
After much bloodshed, Jaguar and a dozen others are tethered together and led away to the city. Their captors are vicious and sadistic, but even they are shaken when they encounter a young girl, half mad with smallpox fever, who delivers a prophecy of their doom. There's a supernatural authority in her huge, dark-as-death eyes.
The captives' entrance to the capital is chilling. The huge bloodstained pyramids that dominate the skyline are a fantastic metaphor of evil, hallucinatory altars of destruction and death, prehistoric weapons of mass destruction. As the crowds cheer, heads literally roll down the pyramid steps as each victim is sacrificed.
The terrified Jaguar and the others are ushered up the main pyramid's steps to have their beating hearts cut out in an offering to the sky god, who they hold responsible for a ruinous drought around their dusty metropolis. Gibson masterfully conjures a sense of insane fantasies fueling satanic levels of violence.
Jaguar miraculously escapes, setting off a frantic chase. He must outrun, outwit and outfight a dozen of the city's toughest warriors to rescue Seven, a battle that Gibson films with rough-and-tumble grace. Although there is little dialogue and the simplest of plots, the narrative is a steady stream of breathtaking images that not only set the ever-wilder pace of the film but the perilous mood, as well.
There's a savage magnificence to "Apocalypto," with visuals worthy of Fellini or David Lynch, and the kind of relentless excitement that only a few filmmakers can deliver. No matter how extraordinary the characters and their actions, the experience has a raw, authentic intensity. This, declares Gibson, is how it was. This is how more films should be.