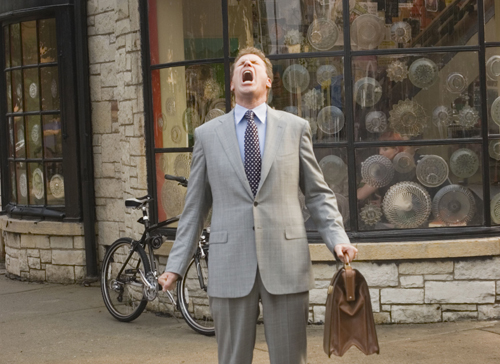 Stranger than Fiction
口白人生
Directed by: Marc Forster
Starring: Will Ferrell, Maggie Gyllenhaal, Emma Thompson and Dustin Hoffman
Opens: Today, January 26
"Stranger than Fiction" forms a sort of trilogy with "Adaptation" and "Eternal Sunshine of the Spotless Mind," two smart, literate, narratively challenging films written by Charlie Kaufman.
Only it's better than either of those movies.
Scripted by first-timer Zach Helm and directed by Marc Forster ("Monster's Ball," "Finding Neverland"), ""Stranger than Fiction" is less infatuated with its own clever complexity than with the struggles of a human heart. This is typical of Forster, a director far more interested in plumbing a story's emotional currents than in showing what he can do with a camera.
In what is essentially a straight role, Will Ferrell plays Harold Crick, a Chicago-based IRS auditor whose world has been largely reduced to mathematical certainties and probabilities. This blank-faced fellow in a gray suit is lousy with people, but he loves numbers so much he might as well be a computer.
And then Harold discovers his narrator.
As moviegoers we're all familiar with the idea of an omniscient narrator who comments on what we're seeing on the screen. What we don't expect is that Harold will start hearing this narration as well.
It's bad enough having this voice in your head describing what you're doing and thinking even as you're doing and thinking it. But when the narrator announces that Harold is about to die ... well, to paraphrase Samuel Johnson, it focuses this indifferent man's mind most wonderfully.
The voice belongs Kay Eiffel (Emma Thompson), a writer of downbeat novels that always end with the death of her protagonists. Kay is a neurotic, chain-smoking recluse who has been struggling for a decade to finish her latest book. Currently she's obsessed with finding a way to kill off her main character, Harold Crick.
She is unaware that there is a real Harold Crick who's picking up her novel like it's a book on tape playing in his head.
Harold seeks professional help, first from a couple of shrinks (Linda Hunt, Tom Hulce) who write him off as just another schizophrenic. Then he consults a professor of literature, Jules Hilbert, (Dustin Hoffman) who tries to pinpoint the author of the novel Harold is living. To that end Jules asks Harold to take notes on his daily routine so that they can determine if his story is a comedy or a tragedy (which is precisely what audiences for this film will be asking at this point).
All this is clever and amusing, though rarely fall-down funny. "Stranger than Fiction" gravitates more toward drollery than belly laughs.
The heart of the yarn (literally and metaphorically) comes when Harold is assigned to audit Ana Pascale (Maggie Gyllenhaal), a bohemian baker who has refrained from paying that part of her income tax that would go for government policies she finds objectionable. She thinks Harold represents everything wrong with America.
Harold thinks she's wonderful, and the joy of this film is watching the tongue-tied, socially inept IRS guy fall in love. Now if only he can stay alive to enjoy this new emotion.
While Ferrell's comedic reputation has been built on expansive, over-the-top characters, "Fiction" requires him to keep a tight lid on Harold's emotions. There's not much physical comedy here, and Harold never knowingly says something funny.
But as Harold's emotional palette gradually expands, the character becomes not only loveable but heroic. It's the most subtle work of Ferrell's career, and the actor gets a sly boost from the guys at Kansas City's MK12, a special effects house that has designed a special look for the film that allows us to appreciate Harold's impenetrable inner world.
In the opening scenes Harold moves through a cloud of numbers which float around him like summer gnats. His every step leaves a numeral resting on the pavement behind him and stretching back like a giant tape measure that only we can see.
Brushing his teeth, he's accompanied by spectral dental charts and a counter clicking away at each stroke. On the job with the IRS, transparent 1040 forms hover over him.
Harold hasn't a picture on the walls of his stark apartment, but he understands the geometric balance of every line in the place. To him, kitchen cabinets and countertops are less real surfaces than eerie glowing blueprints of possible constructions.
Forster knows that this gimmick could get out of hand, and he shrewdly keeps these fantastic elements to a minimum. But they're so visually arresting and provide such keen insights into Harold the human calculator that they provide a graceful bridge between the empty shell the character seems at film's beginning and the full human being who has emerged by film's end.
Ferrell gets solid support from Hoffman (a lovely, whimsical performance - part professorial self-absorption, part nice guy), Thompson (who gives Kay's neuroses a near-tragic dimension) and especially Gyllenhaal, whose shift from hating Harold to loving him feels absolutely right. There's a marvelous scene where Gyllenhaal silently watches Harold playing the one song he knows on guitar, and the emotions that cross her face are a novel unto themselves.
Like its protagonist, "Stranger Than Fiction" is odd and eccentric, but in the end it finds its heart.
After all, if there's hope for a drone like Harold Crick, there's hope for all of us.