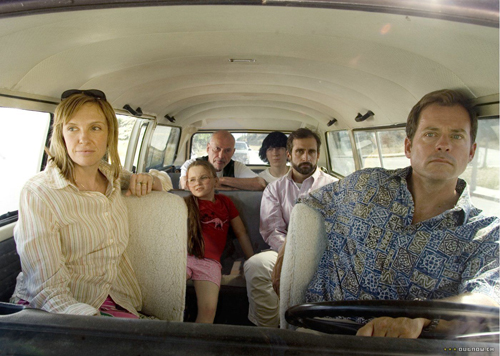 Little Miss Sunshine
小太陽的願望
Directed by: Valerie Faris and Jonathan Dayton
Starring: Greg Kinnear, Toni Collette, Steve Carell, Alan Arkin, Paul Dano and Abigail Breslin
Opens: Today, January 26
If you've ever doubted that kiddie beauty pageants are incredibly creepy, go see Little Miss Sunshine. The made-up, decked-out little pixies of the climactic contest somehow don't look human. They will haunt your dreams. They will make you shudder. They will make you appreciate ugliness.
Oh, the horror. Now that we've got that out of the way: One side of Little Miss Sunshine feels as cute and calculated as a formulaic sitcom. The other serves up a sullen teen, who takes a vow of silence in honor of Nietzsche; and the world's preeminent Proust scholar, who attempts suicide because the love of his life has run off with the world's No. 2 Proust scholar.
Schmaltzy stuff. Smart stuff. It seems the twain can meet, in a yellow VW bus with a hilariously busted horn, on a dysfunctional road trip from New Mexico to Southern California.
Like last week's Talladega Nights, Little Miss Sunshine takes aim at the winner-take-all mentality that would relegate everyone but the champions to the trash bin of society. This week's social Darwinist is Richard (Greg Kinnear), patriarch of the colorfully nutty Hoover clan. Richard likes to spout self-help babble in support of his nine-step program guaranteed to make you a winner. Because if you're not a winner, well, you must be a loser. Now you see why Richard's son (Paul Dano) might embrace the silent darkness of Nietzsche.
Other Hoover family units include mom Sheryl (Toni Collette), the rock of the bunch; her brother, Frank (Steve Carell), the Proust scholar who pines for the graduate student who got away; and Grandpa (the great Alan Arkin), who enjoys snorting white powder and ogling porn. Together, they go to the Little Miss Sunshine pageant, where little Olive (Abigail Breslin) hopes to enter the winner's circle and, of course, please her victory-obsessed pop.
Unlike so many films that force life lessons down your throat, Little Miss Sunshine weaves them into the fabric of the story. On a surface level, one that Richard might espouse before the family trip, the Hoovers are freaks and losers. But the film argues that surfaces aren't good for much. This motley crew simply has to learn to take its bumps and bruises and stick together as a family, for all of their eccentricities and foibles. The moment they learn to do so, at the aforementioned pageant, is both transcendent and very, very funny, enough so that it doesn't make you gag on the sweetness.
Little Miss Sunshine was the talk of this year's Sundance Film Festival, mostly because Fox Searchlight won a bidding war by coughing up US$10.5 million for distribution rights. The boutique studio saw universal appeal in this oddball tale, and it's easy to see why. Some families may try to pretend otherwise, but at the end of the day they're all a little crazy. Little Miss Sunshine scores by preaching the doctrine of acceptance. Nietzsche might not approve, but then again, he ended up in a padded cell.