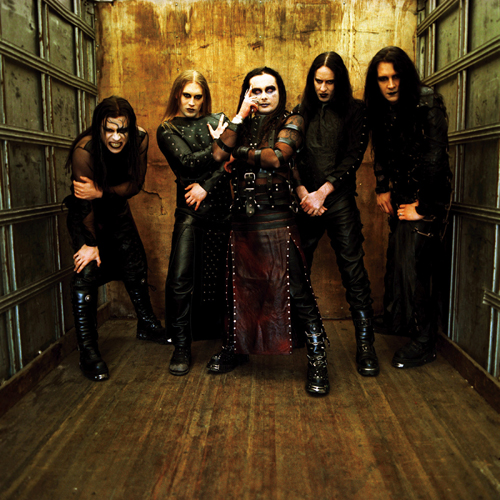 Suffice to say, Cradle of Filth is not your typical heavy metal band. The British group is credited (or blamed, depending on your point of view) as the first to blend Gothic poetry and atmospherics with symphonic keyboards, female backing vocals, black-metal drumming and Iron Maiden-like guitars.
By doing so Cradle of Filth has earned a diverse group of rabid fans from across the underground spectrum, as well as detractors, especially among diehards who deride them for "selling out" to journalists in their homeland who, in turn, criticize them because ... well, because they can.
"I don't know how it is everywhere else, but in England the media love to build a band up and then smash them right down again," says guitarist Paul Allender. "They built us up early on, then smashed us down, but we just kept getting bigger and bigger and they absolutely hated it.
"You can pick up any English music magazine and without fail there's always somebody writing an editorial just having a dig at us. At the end of the day, I don't mind, because it's free press," he says with a laugh.
Though in existence since 1991, Cradle of Filth was for years little more than a cult fave in America, an anomaly in a metal scene mostly dominated by post-hardcore trends and survivors of the early '90s alt-rock explosion. That began to change in 2001, when the band launched its first-full scale North American tour and solidified its lineup after a decade of head-spinning turnover. (Allender is in his second stint with the group, quitting in the mid-1990s and rejoining in 2000.)
Having garnered enough controversy early on with theatrical stage shows and sacrilegious yet morbidly humorous T-shirt slogans (some of which were banned in the UK), Cradle of Filth seemed poised to become Great Britain's answer to Marilyn Manson.
But label and distribution problems stalled the band's progress until 2003, when Cradle of Filth broke through with the CD "Damnation and a Day," which featured a choir and orchestra, and headlined the second stage at Ozzfest, thereby giving its U.S. fan base a shot in the arm. (Allender and his bandmates are lobbying for a stint on this year's edition of the annual touring festival).
Ever since, Allender, vocalist Dani Filth (aka Daniel Lloyd Davey), guitarist Charles Hedger, bassist David Pybus and drummer Martin Skaroupka have been built a legion of U.S. fans to rival their following in Europe.
"It's slowly getting there," says Allender, comparing Cradle's accomplishments in America to its popularity in Europe. "We'll see how it is when we come to the U.S. for touring. Since our last album (2004's 'Nymphetamine,' which was nominated for the best metal performance Grammy Award), we have seen it go up, which is brilliant."
"We've got so many fans from so many different walks of life that there really isn't a typical one," notes Allender. "We've got fans who like heavy metal in general. We've still got the Goths. We've got punk-rock kids into the new album ('Thornography'). We've even got people in business suits. There really isn't one type of fan."
At the moment, Cradle of Filth is off on the second round of touring in support of "Thornography," which was released last October. The disc doesn't have a lot of strings or keyboards and is, in Allender's words, "a lot more metal-oriented."
"There's more thrash influence and it's got more guitar solos," he points out. "We tried to get more into the whole (Judas Priest) Glenn Tipton/K.K. Downing sort of scenario, working with harmonies and stuff like that, but putting it in in a cool way, not just to have it in there."
"We don't like putting solos in for solos' sake," he adds. "There has to be a place for it, and a lot of songs on this album were written with solos in mind. On the previous stuff it was just too busy; there's no need to put solos over single-note harmonies. It would just sound horrible. There has to be some solid rhythm tracks in order for the solos to sing."
In addition to more guitar solos, "Thornography" also features guest vocals from Finnish Goth band H.I.M.'s Ville Vallo on "The Byronic Man," continuing a tradition of surprise cameos - past ones have included Hammer horror film starlet Ingrid Pitt and "Hellraiser" star Doug Bradley.
Response from the critics has been good, and the number of media brickbats tossed Cradle of Filth's way has diminished.
"This time around, the band is so well-formed that when we played London, we said to ourselves that there is no way at all that the English press can run our names down," says Allender. "And when we read (the reviews) they all said it was the best the band has ever been."