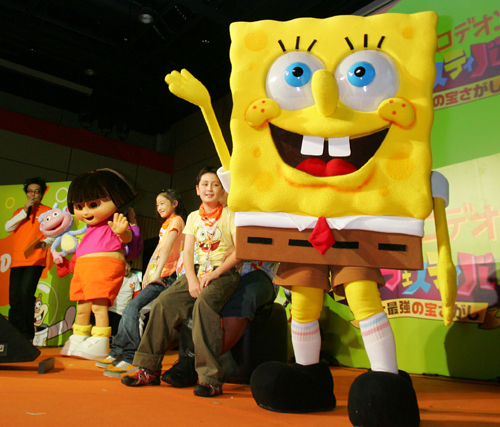 Square and loud, SpongeBob wasn't supposed to have much chance for success in Japan, a nation famous for its love of more cuddly characters like Hello Kitty and Pikachu.
But the perky, bucktoothed American cartoon is proving the skeptics wrong. "SpongeBob SquarePants" attracts nearly 1.9 million Japanese households to his TV show daily and is raking in a growing share of the US$5 billion in annual retail sales for Nickelodeon, the Viacom Inc. unit behind the show.
And he's doing it by capturing the hearts of Japan's young women - not children, his most loyal fans in the U.S.
"I started collecting Bob because I think he's cute and he stands out," said Mayu Takahashi, a 21-year-old student, shopping in Tokyo's fashionable Harajuku district holding a SpongeBob tote bag. "Some of my friends say he's a creepy kind of cute."
SpongeBob's popularity is unusual in that his shows - the No. 1 children's program in the U.S - run as specials on Japanese broadcast channels and only air regularly on satellite and some cable systems, which only some households in Japan have.
Even in the U.S., no one expected a story about a sponge that lives in a pineapple-shaped home to catch on when it started airing in 1999. SpongeBob, created by Stephen Hillenburg, a former marine biology teacher, was a surprise hit.
New York-based Viacom carefully orchestrated SpongeBob's introduction to Japan in 2000. It targeted young women, viewed as trendsetters, through licensed products and sought to give SpongeBob an underground appeal through word of mouth.
Showings of "The SpongeBob SquarePants Movie" were restricted to artsy theaters. A hip-hop designer created SpongeBob jewelry. A pop star was signed to praise the cartoon character in the local media. Glossy magazines targeting teenagers ran stories on him.
Viacom believed this strategy would overcome the risk that SpongeBob might end up a short-lived fad in Japan, where consumers tend to get quickly bored with characters.
Hardly visible at first in items such as handbag charms for trendy high school girls, SpongeBob is now popping up in knickknack stores, mobile phone sites and blogger chatter. More than 30 Japanese companies are churning out goods plastered with SpongeBob's likeness, from a US$1.70 eraser to a US$300 stuffed doll the size of a giant cushion.
Japan is a potentially a larger licensing market than the U.S., partly because Japanese, especially young women, love knickknacks, figures and other character products, although SpongeBob merchandising is also big in the U.S. such as cereal, T-shirts and stickers.
"We were told for a long time that SpongeBob just was a character that wouldn't work in Japan," said Viacom International Japan Vice President Ed Wells. "But if you look everywhere around the world, SpongeBob has really become a huge phenomenon."
Masanori Yamamoto, manager at Kiddy Land toy store in Tokyo, says SpongeBob appeals to young people who want to be ahead of the crowd.
"Disney characters have been around for so long they feel Japanese," he said.
SpongeBob is also appealing to go-getter parents as a fun way to teach English to children.
Emi Aida has her daughters, Sara, 3, and Mika, 5, watch the show in English.
"It's a cute character and so she likes it," she said, eyeing Mika clutching a SpongeBob doll at a recent kids' event that featured games, treats and an actor in a SpongeBob outfit.
But connoisseurs of animation and "manga," the traditional Japanese comics, say SpongeBob would have a hard time appealing to the mainstream.
Manga has a rich history in this nation and is revered as serious literature. Many works target adult readers, tackling complex themes such as samurai philosophy and business strategy, even pornography.
"It's not enough for Japanese that the work is comical," said Akihide Tanikawa, education professor at University of Tsukuba and manga expert. "Japanese manga and animation culture is deep."
By trying to appeal to a mass audience, SpongeBob also runs the risk of losing his cool image. And there's no guarantee he will have lasting appeal with the Japanese, who still tend to have an obsession with cute.
"I thought it was a piece of cheese at first," said 17-year-old Azusa Suzuki, who was in a store looking at Minnie Mouse goods.
In the long run, SpongeBob's success in Japan will depend on its universal appeal, said Wells.
"He wasn't created to sell merchandise," he said. "He was created just to be very good content, pure content, if you want. And I think kids really respond to that. There is a certain sense of innocence and a certain sense that it's real."
Ryo Ozawa, 12, who watches SpongeBob programming regularly on satellite TV at home, agrees. "He's a sponge. And that's different," he said.