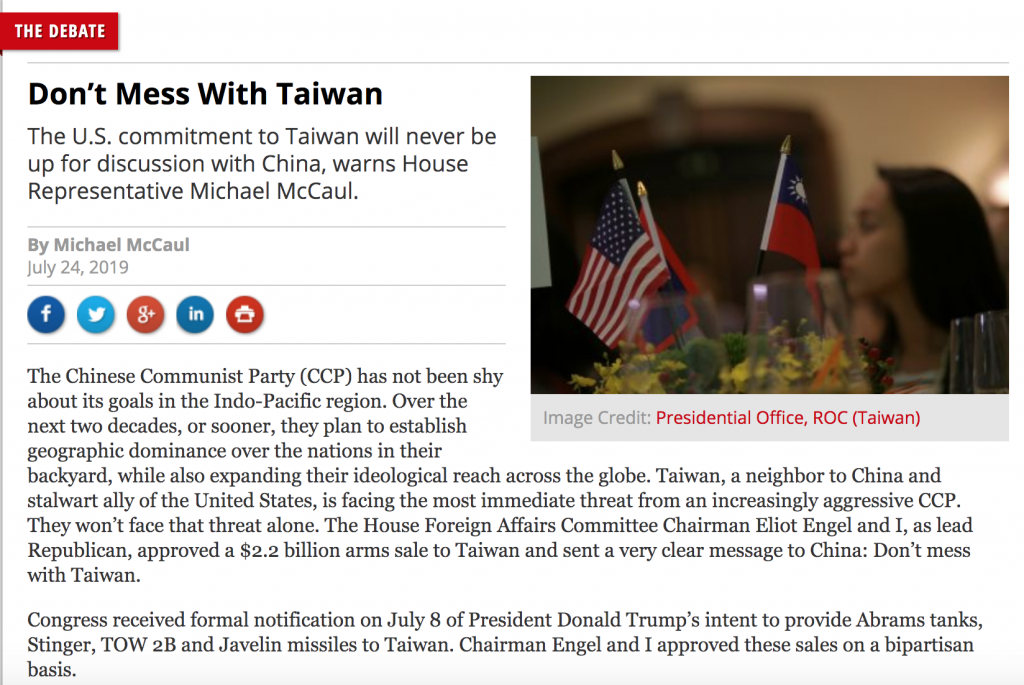 TAIPEI (Taiwan News) — U.S. House Representative Michael McCaul on Wednesday (July 24) reaffirmed the U.S.’ support for Taiwan to protect itself from Chinese coercion while urging the two nations to begin trade talks in the face of Beijing’s growing economic influence in the region.

In an op-ed published in the Diplomat on Wednesday (July 24), McCaul, a ranking member of the House Foreign Affairs Committee, strongly criticized China’s geopolitical ambition in the Indo-Pacific region and the authoritarian state’s hostility toward Taiwan.

“Congress’s arms sales are only a small piece of our support for Taiwan,” the representative said in reference to the US$2.2 billion arms package approved by the U.S. earlier this month. The arms sale “sent a very clear message to China: Don’t mess with Taiwan.”

The representative emphasized that Taiwan’s self-defense capabilities are of interest to bipartisan lawmakers in the U.S. He thus gave his blessing to a sale of dozens of F-16V fighter jets to Taiwan, which he anticipated would take place in the near future.

McCaul also mentioned the meeting between President Tsai Ing-wen (蔡英文) and members of Congress in New York two weeks ago. Both Taiwan and U.S. officials discussed ways to enhance bilateral cooperation in ensuring a peaceful, stable, and prosperous Indo-Pacific region, he said.

He added that Taiwan and the U.S. ought to begin relevant trade talks as a means to “address longstanding market access issues and make our relationship even more mutually beneficial.” The Tsai administration has long expressed an interest in reaching a free trade agreement with the U.S., despite the current impasse involving the import of U.S. pork carrying Ractopamine to Taiwan.

“The United States will continue to strengthen our relationship with Taiwan, and we will not be intimidated,” said McCaul. The article was published the same day as the Chinese military once again threatened the use of force to bring Taiwan under its control.

“If there are people who dare to try to split Taiwan from the country, China’s military will be ready to go to war to firmly safeguard national sovereignty, unity, and territorial integrity,” said China’s Defense Ministry spokesperson, Wu Qian (吳謙), on Tuesday (July 24) at a lunch event for the country’s national defense white paper.

“The American people will not stand aside as China attempts to challenge the resolve of the freedom-loving people of Taiwan,” said McCaul. “Our commitment to Taiwan will never be up for discussion with China.”