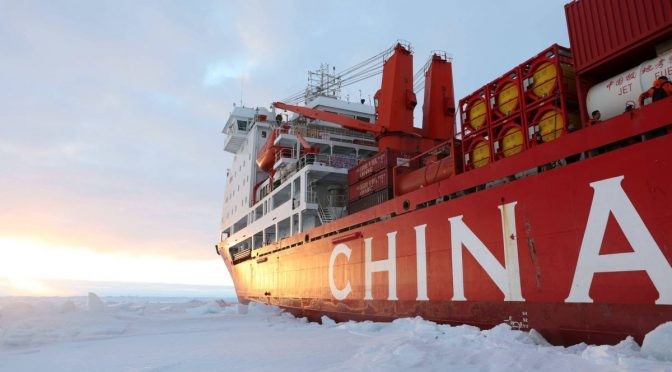 TAIPEI (Taiwan News) – At the recent “8th Symposium on the Impacts of an Ice-Diminishing Arctic on Naval and Maritime Operations” hosted by the Wilson Center in Washington D.C. last week (July 17-18), some U.S. military officers shared their perspectives on China’s increased presence in the Arctic region.

The consensus of the military officers, as reported by Voice of America, is that while the United States recognizes China’s right to operate freely in international waters in accordance with international law, the U.S. does not accept China’s claim that, as a near-Arctic country, that it may dictate how Arctic countries operate in Arctic waters.

At the forum, Thomas Marotta, Reserve Deputy in the Office of the Chief of Naval Operations, said that China, like all nations, is free to operate in the Arctic region as long as it respects international law. However, Beijing’s disregard for UN rulings on the South China Sea sets a troubling precedent for China’s conduct in international waters, noted Marotta.

Vice Admiral Daniel Abel, the Deputy Commandant for Operations of the U.S. Coast Guard, stated that Washington anticipates that the “cooperation and competition” characteristic of U.S. –China relations will begin to extend to the Arctic Ocean, reports VOA. Given Beijng’s aggressive and expansionist conduct in both the South China Sea and the East China Sea, the U.S. will have to increase its military presence and divert more resources to the Arctic in the coming years, noted Abel.

U.S. military representatives at the Wilson Center forum expressed concern that China's actions and attitude in the South China Sea may begin to influence China’s behavior in the Arctic. They agreed that this would be unacceptable, and that despite being welcome in international waters, Arctic countries will not permit China to meddle in the regions affairs in such a manner.