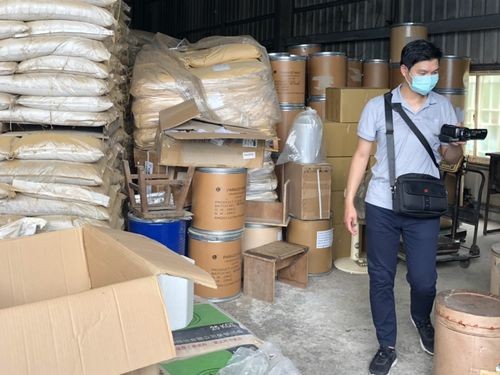 Coast Guard inspectors, animal health authorities and police seized nearly 6,000 kilograms of banned animal drugs during a raid of an animal drug vendor's warehouse in Pingtung County in late May, the Bureau of Animal and Plant Health Inspection and Quarantine (Baphiq) said Wednesday.

The Pingtung-based company was found to have smuggled 40 types of banned animal drugs and raw materials for the production of antibiotics for animals from China and India, the Baphiq said.

After stripping the company of its license to sell drugs for animal use, the bureau transferred the case to the Pingtung District Prosecutors Office.

It has also tracked the flow of the banned drugs into the market and ordered the dealer to recall all illegal products distributed in Taiwan, said the bureau, which did not explain why it was only revealing the case publicly now nor reveal progress made in tracking the illegal drugs since the raid on May 29.

The bureau warned that the banned drugs would harm the health of animals because they had not undergone safety and potency tests.

"The rights and interests of livestock, poultry and aquaculture farmers could be jeopardized," the bureau said.

Under the Veterinary Drugs Control Act, importing and selling banned veterinary drugs without permit is subjected to imprisonment of up to seven years and a fine of up to NT$4.5 million (US$145,000).