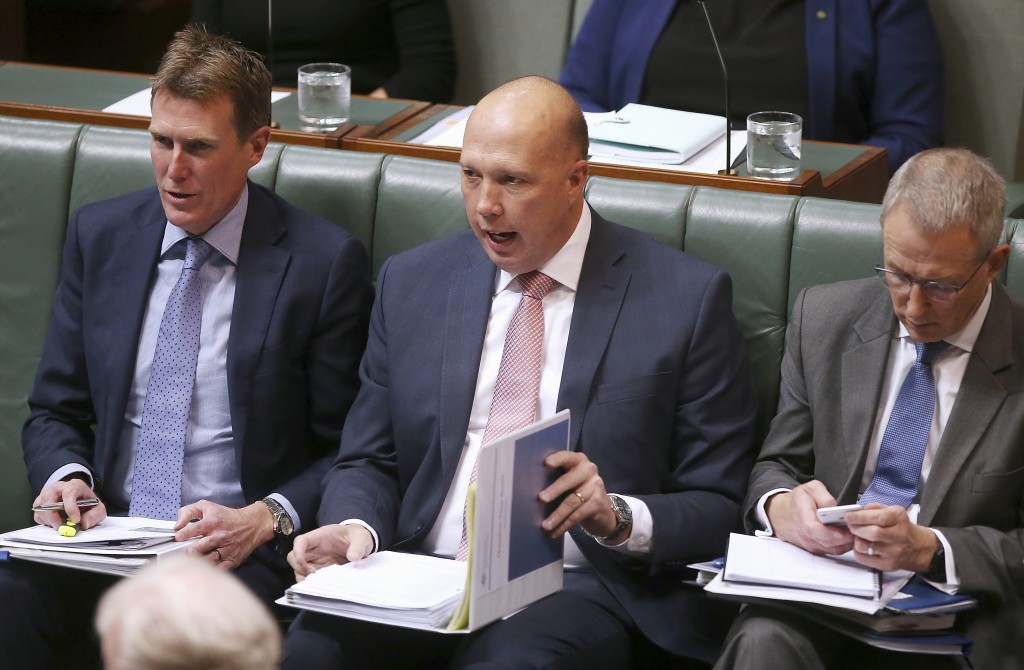 CANBERRA, Australia (AP) — Australia is set to pass laws as early as Wednesday that would allow the government to prevent suspected extremists from returning home for up to two years while Australian supporters of the Islamic State group are demanding to be repatriated from crowded Syrian refugee camps.

The bills based on British law are scheduled for debate in the Senate on Wednesday after they were passed Tuesday night in the House of Representatives where the conservative government holds a majority.

The center-left Labor Party opposition wants the legislation made more consistent with the British model with amendments that would allow a judge rather than Home Affairs Minister Peter Dutton to decide which Australians are banished. But the opposition supported the legislation in the House, indicating that their misgivings were not sufficient to attempt to block its passage.

Dutton argues he needs the flexibility to act quickly to prevent extremists returning.

He also argues that some of Labor's proposed amendments set the threshold for preventing Australians from returning too high.

The so-called Temporary Exclusion Order was "designed to ensure that authorities can manage these returns in a way that keeps the Australian community safe," Dutton told Parliament.

Parliament is debating the law change as aid groups estimate that at least 50 Australian women and children have been stranded in overcrowded Syrian refugee camps following the loss of Islamic State's territory in the Middle East.

Australia announced a month ago its first organized repatriation from the conflict zone, when eight Australian offspring of two slain Islamic State group fighters were moved from the al-Hawl camp in northeastern Syria across the border to Iraq.

Rob Stary, a lawyer who represents 18 Australian women and children among the 65,000 refugees at al-Hawl, said he will initiate Australian Federal Court action against the government unless it repatriates his clients.

Stary said some of his clients accepted they could be imprisoned in Australia under laws that make just traveling to the former Islamic State group stronghold of al-Raqqa a crime.

Being ordered to stay out of Australia for two years put his clients at risk, Stary said.

"The risk is that they'll continue to be radicalized, they certainly won't get the same medical treatment that one would expect if they've been injured, and they'll be certainly subject to the risk of further assault — particularly women, of sexual assault," Stary told Australian Broadcasting Corp.

Dutton said his government would look at repatriating Australians case by case, particularly where young children were involved.

"There are some women within the group who would pose a significant security threat to our country," Dutton said. "These are not innocent women who have taken their children into the theater of war — we're talking about some very difficult cases here, some people who would cause us harm."