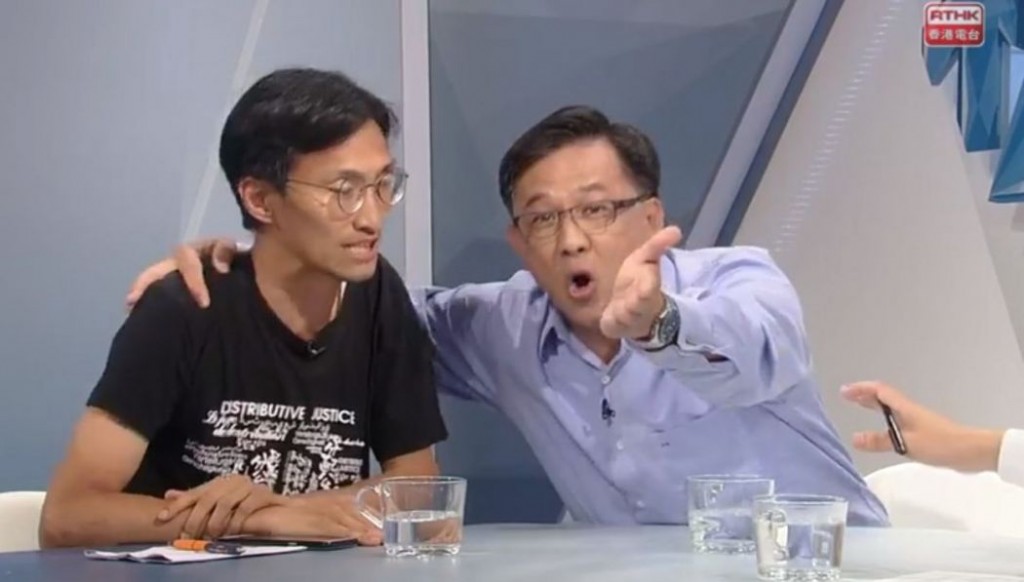 During a talk show on Radio Television Hong Kong (RTHK) at 11 a.m. this morning, Ho got into a heated debate with Hong Kong social activist and lawmaker Eddie Chu, just a day after videos surfaced of him cozying up with men in white T-shirts suspected of beating innocent civilians at an MTR station in Hong Kong on Sunday. During the debate, Ho called on a temporary ban on the protests and tried force Chu to tell activists to stop demonstrating against the extradition bill, before eventually angrily storming off the set.

At one point in the debate, much of which consisted of the two shouting over each other, Ho said that violence is not allowed, and therefore Chu should tell the viewers to stop the anti-extradition protests. Ho then grabbed Chu by the shoulder, shook him, and tried to make him face the camera to call on Hong Kong activists to end their demonstrations.

Chu refused to follow Ho's orders, and countered that Ho should tell the men in white T-shirts to stop their violent acts. Junius replied by saying he did not care what color shirts the people were wearing and again tried to force Chu to call for an end to the protests.

Ho then said that it was his fourth time to call on Chu to tell the protesters to stop all violent acts and end the anti-extradition bill protests. Chu said that the protests would not end unless the government agreed to the demonstrators' demands, including the release of all arrested protesters.

Fuming, Ho shouted, "You are a DPP [Taiwan's Democratic Progressive Party]. You think you can dictate everything. You think you are the best? You brought violence to the council, society, and community!" Ho then pointed to Chu and said "You're scum!" before smashing his hands on the table, ripping out his wireless microphone, and storming off the set.

Ming Pao reports that as Junius stormed off the set, he shouted at Chu, "You're not fit to be a legislative council member!" An RTHK employee reportedly retorted, "You're not either!"

This video circulating is of Junius Ho, the former president to of the HK law society and a lawmaker shaking hands with the people waving China flags in Yuen Long pic.twitter.com/Q2kXeg03y1