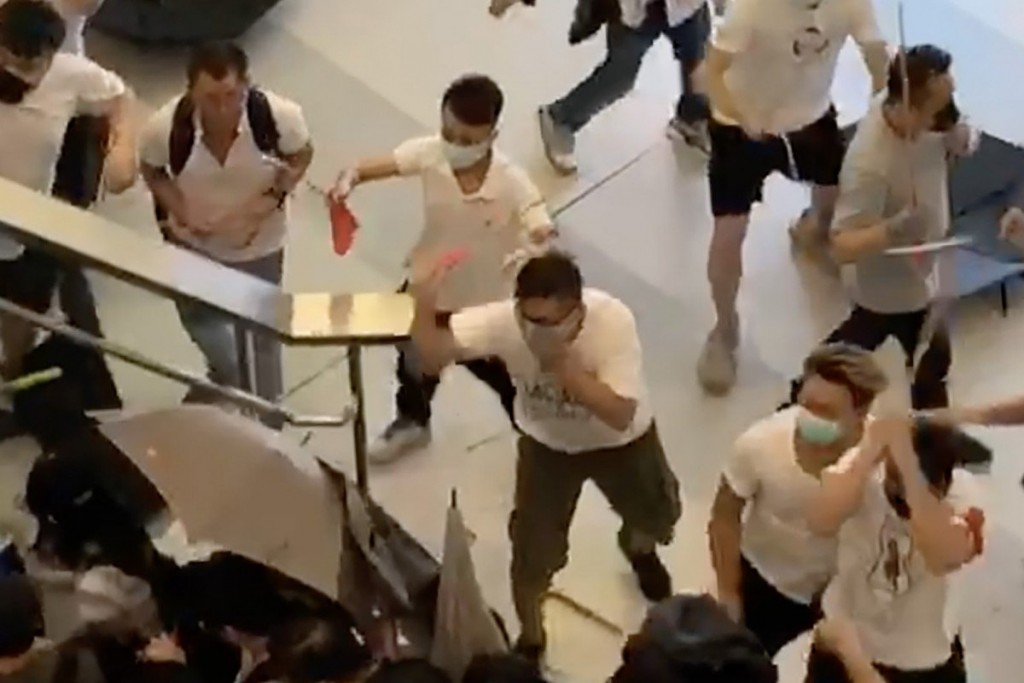 On Sunday, organizers said that 430,000 people marched to Hong Kong's Wan Chai district as part of ongoing protests against a controversial extradition bill and dissatisfaction with Beijing's hand-picked leader of the special administrative region, Carrie Lam. The protests were peaceful until demonstrators marched past the designated end-point in Wan Chai and pushed forward toward key government and business districts.

Once they reached Communist China's Liaison Office, they threw eggs, spray-painted surveillance cameras, and doused China's national emblem on the building with black paint, reported AP. Riot police then launched tear gas canisters to try to disperse the crowd, and many scuffles ensued.

By 10:30 p.m., the men in white shirts began viciously assaulting people wearing black t-shirts, those associated with the Hong Kong activists, reported Straits Times. The MTR Corporation claimed it called the police at 10:45 p.m. and trains stopped running into the station by 11 p.m., according to the report.

When police finally arrived at 11:15, they were met with angry passengers who were furious that the police had taken nearly an hour to appear on the scene. By that time, the white-clad men had dispersed.

However, after the police left at around midnight, the men in white shirts reappeared, pried open MTR station doors and again resumed their attacks. Police did not return until 1 a.m., and it was not for another three hours that police quelled the rampage, reported Straits Times.

Police confiscated some metal bars, questioned the men, but did not arrest any of them, according to the report. Pro-Beijing lawmaker Junius Ho Kwan-yiu was seen in a video, which was shared widely online, showing him shake hands with the men in white T-shirts on Fung Yau Street East, and on Monday took to Facebook to describe them as “chivalrous men” who safeguarded their homes, reported SCMP.

In a statement, MTR Corp’s chief executive officer Jacob Kam Chak-pui said "MTR Corporation strongly condemns the violence that occurred on railway premises last night. We will fully cooperate with the law enforcement authorities on the investigation," according to the report.

SCMP reports 36 injured from the attacks, while the Straits Times lists the number of injured at 40, including a lawmaker and journalists. Among the injured was Democratic party lawmaker Lam Cheuk-ting, who could be seen bleeding from his mouth on his live Facebook feed.

On Monday, Lam asked reporters, "Is Hong Kong now allowing triads to do what they want, beating up people on the street with weapons?" The first clip below shows Lam bleeding after brutal assault on subway passengers by men in white shirts.