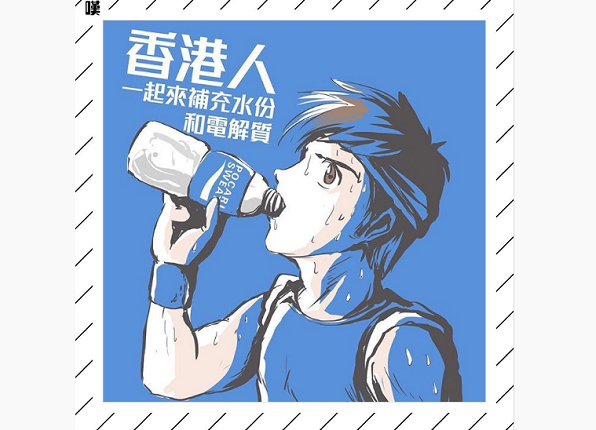 TAIPEI (Taiwan News) –A Japanese sports drink, Pocari Sweat, has become a drink of choice among Hong Kong’s young protestors, and Chinese netizens are not happy about it.

Over the past week, Chinese citizens have begun to boycott the product across China due to the popular perception that Pocari Sweat’s owner, Otsuka Pharmaceutical, is sympathetic to the Hong Kong protestors.

Chinese anger at the company originated after it was revealed on social media that its Hong Kong office had decided to pull television advertising from the TVB network in Hong Kong on July 9. The next day, private Facebook messages showed that the ads had been pulled “in response to public concern” due to TVB's overtly pro-Beijing bias in reporting.

Pro-democracy activists in Hong Kong were thrilled with the news, and Pocari Sweat sales skyrocketed over the subsequent days, with the drink being seen as an unofficial sponsor of the protests by many young activists, according to reports. However, an angry reaction soon followed from Chinese netizens, with calls for a national boycott of Otsuka Pharmaceuticals.

Protestors cleaning up after the Sheung Shui protest yesterday, it shows how the protestors positively responded to the brave action of Pocari Sweat (Japanese sports drink) decision to withdraw advertisement from TVB #PocariSweat pic.twitter.com/RVmF3LuwLV

Chinese celebrities and regular citizens lashed out at the sports drink company, which they felt had offended the feelings of the Chinese people. Hong Kong’s former Chief Executive Leung Chun-ying even condemned the drink and issued a call for a boycott, reports Quartz.

In response, Otsuka’s Hong Kong office issued a simple statement recognizing that the private Facebook messages have “led to inconvenience,” but they have not reversed course nor apologized for pulling ads from the pro-China TV station. As a result, protestors in Hong Kong are still supportive of the brand. The company's main office in China, however, has sought to appease Chinese consumers by insisting that the Hong Kong office acts independently. In a Weibo post on July 21, the company declared support for the “One Country, Two Systems” framework and respect for Hong Kong’s Basic Law.

However, the late apology and show of support for Beijing’s official policy appears to be too little too late, as Chinese netizens are now defaming Otsuka Pharmaceuticals and Pocari Sweat as being “two-faced” and “fence-sitting.”

The state-backed Global Times suggests the company is trying to deceive Chinese consumers and that the company’s office in Hong Kong has been hijacked by pro-democracy elements, which are contributing to rising social tensions in Hong Kong. The report entitled “Chinese netizens angered by Pocari Sweat's fence-sitting on Hong Kong” indicates that business troubles for the company in China are far from over.