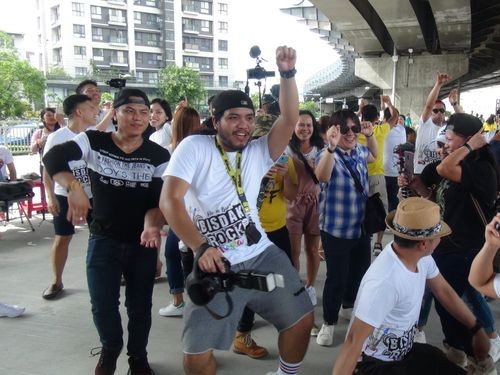 Taipei, July 21 (CNA) Hundreds of Filipinos from the Visayas and Mindanao island groups gathered in Hsinchu on Sunday to celebrate their culture with presentations of live music, dance and food, according to the organizers.

Marie Yang, who hails from the province of Negros Occidental in Visayas, said the main goal of the gathering of some 800 people was to establish and cement friendships among people from the two island groups.

"It's about getting together Filipinos from Visayas and Mindanao in the Philippines, because the Bisaya (Visayan) community here is huge but they usually hold their own events, so today's event really unites the community as a whole," she said.

The Visayans is an umbrella term for ethnolinguistic groups native to Visayas, most parts of Mindanao, and Luzon's southernmost islands.

The Bisdak Rock Fiesta, as the event was called, kicked off with a shout out to the participating Filipino groups, followed by live music and dance performances by Filipino entertainers, Yang said. 
One of the more popular activities at the fiesta was a "boodle fight," which is a Filipino tradition of grabbing food laid out on a long table and eating it with bare hands.

Agrifino Tagbacaula, who is from Dipolog City in Mindanao, said he was pleased to see the unity among the many people from Visayas and Mindanao, who make up half of the Filipino migrant community in Taiwan.

"We are very proud that this event is filled with kababayans (fellow countrymen) from Visayas through to Mindanao," he said.

According to Ministry of Labor statistics, there were 153,865 Filipino migrant workers in Taiwan as of the end of May.